Brighton is chocca with stuff to do. More than just a trip to the seaside, here are some of Brighton’s must-do attractions

Ever wondered what a hamster feels like when it’s spinning at top speed in its little exercise ball? No? Me neither. But you’ll get the idea when you give zorbing a go in the rolling green hills of Devil’s on the South Downs, a 15-minute bus ride from Brighton. Zorbers are strapped inside a 12ft inflatable PVC sphere, before plummeting down the slope for a 30mph head-over-heels ride that lasts for 90 seconds – the UK’s longest run.

Alternatively, pretend you’re in a human-sized washing machine by opting for a ride in an Aqua-Orb, filled with 50 litres of icy water. After this stomach-churning experience, you’ll be in need of a beer so take a stroll down the windy hills of the Downs, gazing at the sea in the distance, until you reach a cutesy village with the snigger-inducing name of Fulking (where most of the signposts have been amended by cheeky schoolboys). Here you’ll find charming boozer Shepherd and Dog, which has an attractive beer garden. 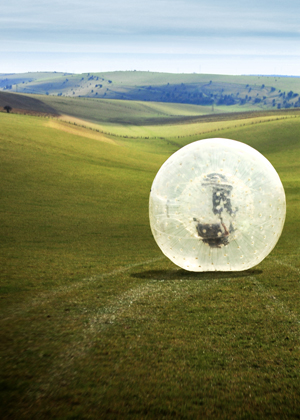 If you’re fed up with high street chains, head to North Laine, which heaves with cosmopolitan and wacky shops.

The pedestrianised shopping enclave dates back to the 1830s, and is also home to a nexus of watering holes, four theatres, and pavement cafes. From retro ’50s-style polka-dot frocks to edgy interior design, and from kites to art prints, bohemian North Laine is a shopaholic’s paradise.

Flea markets often spring up in nearby residential streets, selling everything from vintage jewellery to bric-a-brac. Discover bargains aplenty at Snooper’s Paradise, which houses more than 100 stalls selling second-hand wonders. Nearby, The Lanes teem with antique shops, jewellers, designer clothes boutiques, art and modern furnishings, as well as a smattering of restaurants and cafes. 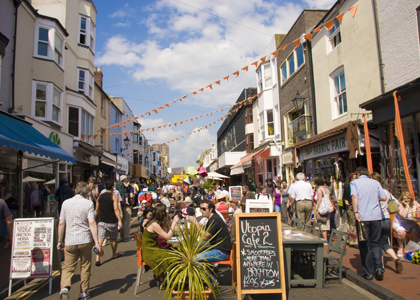 Gloriously liberal and nonconformist, Brighton is a magnet for bohemian types. In fact, the free-thinking people of Brighton made political history recently by electing Britain’s first Green Party MP in the recent general election.

While sitting on the pier or strolling around North Laine, you’ll spot dodgy transvestites, trendy students (Brighton has two universities), crusty vagabonds, yummy mummies who have escaped London, and stag parties in drag. It has an eclectic mix of celebrity residents – from Fatboy Slim to Paul McCartney’s ex, Heather Mills. You may even spot eccentric retired boxer Chris Eubank driving his seven-tonne truck through the streets.

Thanks to its huge student population and higher-than-average proportion of achingly hip residents, Brighton has a stellar nightlife with an abundance of brilliant clubs, most of which can be found along the seafront.

The Funky Buddha Lounge is sited in the subterranean arches of the seafront and is shaped like two giant tubes. Music varies from disco to indie to R’n’B. Big name DJs often play at Digital Brighton, while those in the know say the Honeyclub is the best place to go on a Saturday night.

One of the town’s most iconic attractions, Brighton Pier is a Victorian architectural marvel that features a range of fairground attractions and a games arcade. Thrill-seekers can feel their heartbeat surge on the Super Booster, which lifts passengers to 38m with only the sea below, before dropping them through the air at 60mph. For a genuine seaside experience, buy fish and chips and scoff them on the pier.

The beachfront also deserves a wander as it’s abuzz with seaside shops and artists’ studios. 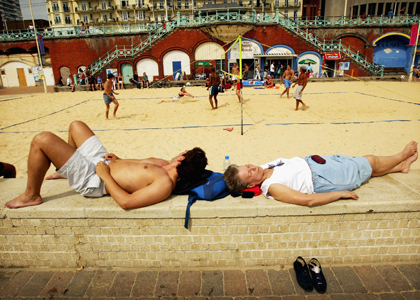 Enjoy an insider’s view of the city on a free walking tour with a friendly local, as part of the Brighton Greeter scheme. The resident will be happy to take you to explore any area of the city or cover any topic of your choosing. Greets last two to four hours and must be booked in advance via visitbrighton.com/greeters.

Brighton has provided the setting for numerous hip movies, including Quadrophenia, Cassandra’s Dream and Brighton Rock. Download the Brighton film locations podcast and movie map by clicking on visitbrighton.com/site/maps-guides-and-interactive/podcasts.

Brighton’s flamboyant Lesbian, Gay, Bisexual and Transgender festival, Pride Parade, sets off at 11am this Saturday (August 7) from Madeira Drive, next to Brighton Pier, arriving at Preston Park at about 1pm. Expect music tents, cabaret, bars and food stalls at this free festival.

Get more info at: brightonpride.org.

WHEN TO GO: Any time, although Orb 360 only runs orbing experiences from March until the end of October.
GETTING THERE: Trains run from London Victoria to Brighton three times an hour.
GETTING AROUND: Brighton is easy to explore on foot. Reach Orb 360 by taking the 77 bus from Brighton Station.
GOING OUT: A pint of beer costs about £3.25.
ACCOMMODATION: A bed in a shared dorm costs about £25, while a hotel room costs from £50.
GET MORE INFO AT: VisitBrighton.com for tips on what to see and do in Brighton and Hove.

BOOK A HOSTEL IN BRIGHTON
Brighton in the winter