Bruges on a budget – exploring the historic Belgian city

Picturing my upcoming weekend in medieval Bruges, I imagine sipping Belgian beer in cosy bars and strolling along scenic cobble-stoned streets where time appears to have stood still. Unfortunately, I soon discover that inflation is not stuck in this time warp and that the Flemish capital caters to the mass market with extortionate cruise ship prices. I refuse to splash out £26 on some tough steak and a pile of chips and I don’t think a bowl of garlicky sea molluscs is worth the £17 price tag, so I vow to make the most of my hard-earned cash by enjoying Bruges and its culinary delights without spending a fortune.

The hotel receptionist suggests I head to Sint- Amandsstraat Street where the locals go to grab a bite to eat. Here, I discover several delis serving up hearty portions of pasta and paninis for a mere £2.60 apiece. The Carrefour Express on Zuidzandstraat stocks enough affordable slabs of Belgian chocolate to burst the seams on my jeans. As I load up on supplies for later, the weather turns and it starts to pour with rain – the perfect excuse to start sampling that famous Belgian beer around the corner in ‘t Brugs Beertje or the “Little Bear” (brugsbeerteje.be).

Boasting more than 300 types of beer, including everything from chocolate to cherry flavours, there’s plenty of choice in this old-fashioned, characterful wooden bar to while away the hours and write postcards home to Mum, though my mantra is: why waste money on expensive postcards when beer mats are free and plentiful?

The following day, awaking fresh from a beer-induced sleep, I plan to see as many museums as possible in 48 hours using the bargain City Card (bruggecitycar.be) which costs £29 for 48 hours – or £26 if you’re 26 and under – meaning I can dash around as many as I see fit and really get my money’s worth. The tourist board reckons the card, which can be bought online or from a kiosk at Bruges train station, should save you up to £173 if you manage to visit everything in that time. 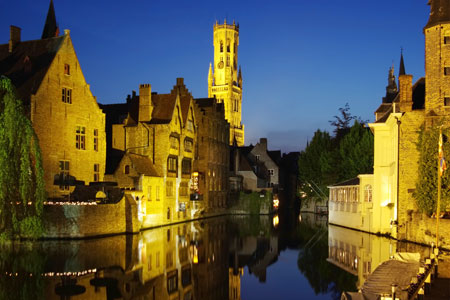 The canal boat tour offers a different perspective on the city’s picture-pretty medieval cityscape while the Dali Expo (dali-interart.be) is a sumptuously decorated museum devoted to the works of the Spanish surrealist painter. I swing by the must-see belfry, an 83-metre-tall medieval bell tower that played a starring role in the Colin Farrell movie In Bruges. I climb the 366 steps to the top of the tower, which affords fabulous views of this picturesque city. The attraction that really captivates me, however, is the Chocostory (choco-story.be), dedicated to all things cocoa-related and best of all, dishes out free chocolate.

As Belgium is particularly famous for its chips, I can’t resist a stop at the fascinating Frietsmuseum (frietmuseum.be) that professes to be “the only museum in the world to relate the history of the potato fry”. As well as selling discount chips from its basement café, the museum offers tips on how to cook the perfect friet. I discover that the Belgian chip is traditionally fried in a combination of beef and horse fat, ?so veggies beware! The Half Moon Brewery (Walplein 26, halvemaan.be) offers guided tours where we learn about the history behind brewing and receive drink-related advice. I discover that an acidic snack is the best thing to replenish the gut to make the night last longer and that the coriander used in the brewing process – also found in Hoegaarden and Leffe – is actually an aphrodisiac.

On an early stroll through the historic centre on Sunday morning I notice that free souvenirs can be found in the form of discarded beer glasses on the pavement and windowsills, left from the festivities of the night before. Cambrinus bar is an unmissable drinking institution with hundreds of beers to choose from, all served in their own individual and quirky glasses and, asking nicely, I manage to get some free promotional games from McChouffe, a beer brand. What a bonus – that’s all my souvenirs acquired for free.

One final word of warning to those on a budget: the local authorities don’t look fondly upon “wild peeing”. Getting caught with your pants down will cost you a not-so-cool £131!

Budget
The cheapest eats are the friets that Belgium is so famous for, with the most popular vendors being the two carts that battle it out in front of the belfry from 7am. Expect to pay about £2.60 for a cone of fries smothered in mayonnaise.

Midrange
Cambrinus serves the magnificent Menu of the Brewers (£22), consisting of Trappist Cheese Croquettes, followed by Flemish carbonades prepared with “Gulden Draak” Beer served with applesauce, and to finish, a crème brûlée perfumed with the dark Abbey beer of Ename (cambrinus.eu).

Luxury
Indulge at Den Dyver, which serves four courses with a beer selection for £85. The dishes at this upmarket restaurant are individually paired with beers as well as being cooked in Belgium’s favourite nectar. Try the  carpaccio of codfish with hazelnut butter, wheat beer and lime ?(dyver.be).

Budget
Unfortunately, beer is not cheap in Belgium, normally working out about £6 a pint, so make the most of happy hour at Snuffels’ Bar with 80p happy hour beers from 9-10pm (snuffel.be)

Midrange
Staminee De Garre is a wood-panelled establishment hidden away down a narrow alleyway off Breidelstraat (De Garre 1). Draught beer starts from about £3 a glass and every drink is served with a portion of cheese cubes. Their signature beer is the aptly named De Garre, which ?is a knee trembling 10.5 per cent ?(00 32 5034 1029).

Luxury
If you fancy a change from beer, visit the Wijnbar Est, which offers a dizzying selection of more than 90 wines. Get on down to  a bit of live jazz or blues every Sunday from 8pm (wijnbarest.be).

Budget
Snuffel Backpacker Hostel has dorm beds from £16pppn, the cheapest offering in town. They ?also have a kitchen, free walking tours, bicycles for rent and their ?own bar with a nightly happy ?hour (snuffel.be).

Midrange
The Etap Hotel looks like an IKEA showroom. Being right above the station, you won’t waste any time hunting for it and the modern minimalist rooms cost from £37 ?per double room per night (etaphotel.com).

Luxury
Mega splurge at the four-star De Tuilerieen and you could be lucky enough to be rubbing shoulders with Colin Farrell, Ralph Fiennes, Rutger Hauer or Demis Roussos.  A superior deluxe double room in this 15th century noble residence starts at £111 (hoteltuilerieen.com).

Fancy a trip to Bruges? For tourist information and concert listsings, see brugge.be and for general details see visitflanders.co.uk

Snooker: Williams back in the winners’ circle again