Buckley keeps the peace as Pies search for form

Buckley has refused to become involved in the feud that has broken out between Magpies president Eddie McGuire and Mick Malthouse, the man Buckley replaced as senior coach.

Buckley said McGuire was a passionate defender of the club and Malthouse was entitled to his opinion as a media commentator.

Buckley went so far as to say that Malthouse was doing a particularly good job in his media commentary.

“I take notice of his opinions,” Buckley said.

There has been extraordinary fallout for Collingwood after Friday night’s 10-goal loss to arch-rivals Carlton.

Apart from the feud between McGuire and Malthouse, key midfielder Luke Ball will miss the rest of the season with a knee reconstruction.

The Magpies coach said he was unaware of any such problems.

“I don’t know where that is coming from,” Buckley said. “No rumours concern me.” 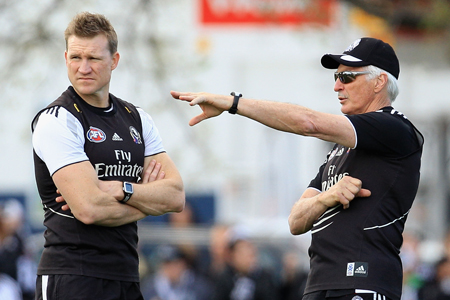 Buckley noted that Geelong, who beat Collingwood in last year’s grand final, also lost on the weekend and have one win from three games.

“But the scenarios and situation around Collingwood are a little sexier at the moment,” Buckley said.

“We understand if we don’t perform there’s going to be heat and if we do perform, you are going to be able to go about your business without the paraphernalia that surrounds it.”