Bucks ready to bite: London Broncos enforcer Shane Rodney loves life in the Big Smoke but wants to match it on the field

However, at 15, then a resident of Penrith, he got injured riding one of the four-legged brutes. After that, his primary focus became beasts of the two-legged variety on the rugby league field.

That’s served him well, as what’s followed is an impressive career including two Premierships, first for his hometown Panthers and then – after a spate of injuries that required surgery to his ankle, spine and both shoulders – the Manly Sea Eagles.

Just the 125 NRL games he played before signing to the London Broncos last year makes him a tough bastard compared to most.

So, when TNT asks the forward how he’s been embracing London life over the past 12 months, we expect something along the lines of wearing a West Ham shirt to Millwall games, not sipping lattes in cafes, playing golf and “hanging out on the Thames”. 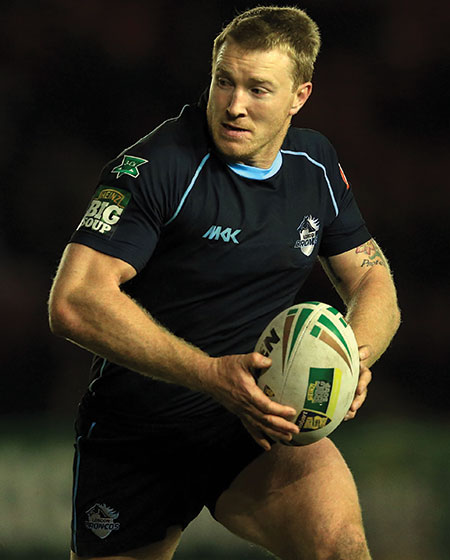 So, on your Boris bike you clichés, it turns out Rodney’s off-field persona, the guy whose spare time is spent enjoying the capital with his wife Jacquie and 17-month-old son Nash (and they have another on the way), couldn’t be further from the tough nut in the Broncos’ black strip every weekend.

“It’s a brilliant lifestyle here,” the 29-year-old says. “So different to back home. I love my coffee so we spend a lot of time in cafes, and I like to play a bit of golf with the other guys when we get a chance. Last summer there was a lot of hanging out on the Thames.

“There’s a great atmosphere when the sun comes out and everyone lines the banks, there’s nothing like it. Most time is taken up by our young bloke, which is great, and this is a top place for that.

”Rodney lobbed in London last January at the same time as fellow Aussies Michael Robertson and Chris Bailey, who he won the 2008 grand final with at Manly, and Craig Gower, captain of the Penrith side which won the 2003 premiership in his first full NRL season.

The recruits are part of owner David Hughes’ bid to enhance the Broncos’ shot at success, but despite promise he’s yet to reap the rewards of his investment – though there was a sign of things to come when they made a surge at the end of last season, which included a miraculous 62-18 thrashing of eventual grand finalists Warrington. 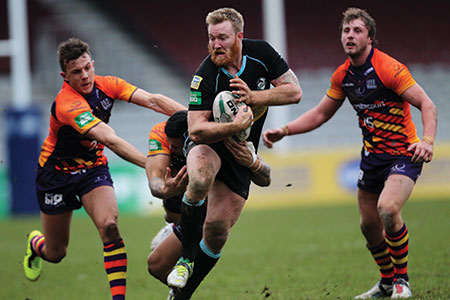 Rodney says his side has wins in them and that good times are coming after a few tough losses already this year. And he sees no reason why his next trophy can’t be in London.

“That first one in Penrith was funny, there were a few of us in the same boat as newcomers to first grade and we went on a run at the end of the season and got there [to beat Sydney Roosters 18-6 in the grand final],” he recalls having made his top-flight debut in round 20 of the previous year.

“It seemed so easy. You think they come all the time when it happens that quickly, but of course that’s not the reality.”

Before coming to London, Rodney sought counsel from his former skipper Gower, who was coming back to rugby league to finish his decorated career – a former NSW and Australian captain – after three years playing union in France for Bayonne and the Italian national side.

“He said there were great opportunities in London, and they were building a good squad,” Rodney says of the move he’d previously said he always wanted to make.

“Michael [Robertson] came at the same time and Chris [Bailey] was here the year before, so it’s a good environment for me. And having Craig here is great.

“His leadership is second to none. He sets an example for everyone, the young guys especially.” 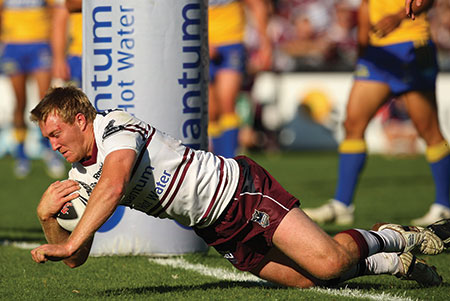 The Broncos looked the goods in trial matches this year, accounting for Toulouse Olympique 34-0 in France and Super League side Catalan Dragons 26-22.

But all the hard work and preparation under returned head coach Tony Rea, also an Aussie, is nothing without results on the park, Rodney admits.

“Everyone’s working really hard, so we’ve just got to stay strong and keep working hard, and the wins will come.”

Those victories will also hopefully bring with them the crowds the Broncos deserve in the capital, where rugby league comes a distant third to football and rugby union – the Broncos’ home ground is the home of union, a fortress for England and Harlequins in the Aviva Premiership.

For a bloke used to clubs in places where league is the centre of the universe, Manly and Penrith, London’s a culture shock Rodney says is mostly a blessing, but a bit of a curse.

“It’s a good thing as a player that you don’t hear about league much here at all,” he says.

“I was talking to the guys from Melbourne [Storm] about it last week, who have a similar thing being in a city where AFL is number one. You quite enjoy coming home to not read about a bad game, whereas back [in Australia] it’s everywhere.

“At the same time, with football everywhere and union’s where we are, we struggle a bit with the fan base and don’t get much coverage to promote the side compared to the clubs up north where league is much bigger.”

It’s a shame for a competition that is hugely entertaining.“A lot of emphasis is on attack here,” he says.

“You can be on the wing, catch three passes and run five metres for a try and be man of the match.

Back home it’s the guys making 50 tackles and a stack of hit-ups getting the rewards. But here it’s attack all the time. When people come they see for themselves how tough, fast and skilled it is.” 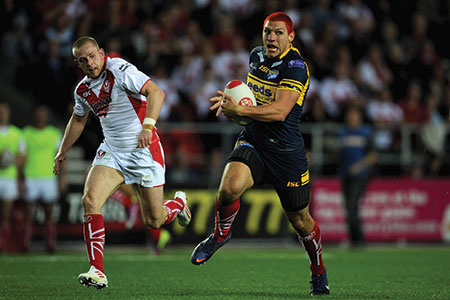 The Super League’s most cracking rivalry of the past decade reignites this weekend when St Helens host the Leeds Rhinos on Friday night at 8pm.

Bizarrely, the last time Merseysiders St Helens won the big one was in 2006 – Leeds have won the premiership every year since 2007, except for 2010 when Wigan beat St Helens.

But when we look at the head-to-head between the two teams it’s St Helens who have the edge, winning four of the clubs’ last five clashes.

This included a 46-6 thrashing of the eventual champions in March last year at Langtree Park, where they’ll meet this week, followed up by a slightly tighter 31-18 win away at Leeds’ home Headingly Carnegie.

Broncos play Salford City this Friday and at home to Hull KR on Saturday March 9, 6.15pm, at Twickenham Stoop.