Burgers contaminated with horse meat may have been sold ‘for years’

It came out last Tuesday that Irish food inspectors discovered some frozen patties stocked in major supermarket chains to contain as much as 27% horse meat. Tesco – one of the retailers found to have stocked the offending Dobbin-patties – has already placed full-paged apologies in UK papers. Tesco’s, in addition to six other leading supermarket chains, have cleared a total of ten million frozen beefburgers from their shelves.

Since Irish authorities first made the discovery, the Food Standards Authority in Britain has been accused of slacking. Tim Lang, a professor of food policy at City University, London, noted that the situation “could have been going on for years, but we wouldn’t know about it because we never conducted tests”. He further urged the agency to take “a more critical approach”.  The UK food watchdog said it had not conducted checks in the past, partly because horse meat poses no health threat. The agency has since said it is considering taking legal action against offending supermarkets and suppliers. 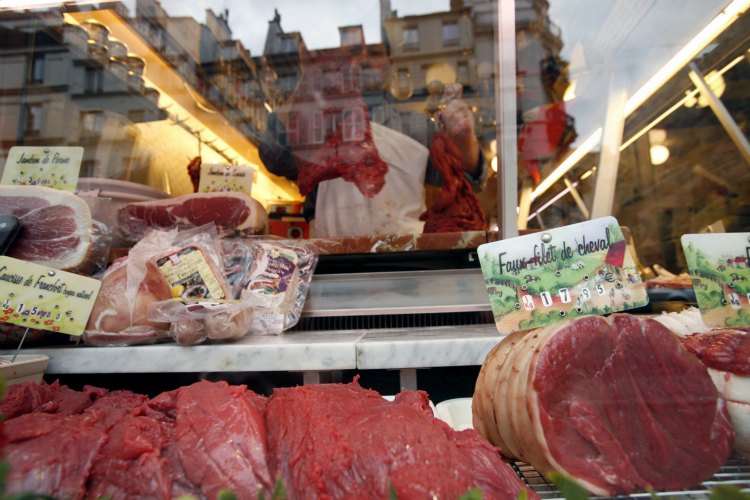 A horse meat butcher’s shop in Paris, France – where horse is considered a delicacy (Getty images)

ABP Food Group – the company at the centre of the scandal – has said it will adopt strict DNA testing henceforth.

“It is vital that the integrity of the supply chain is assured and we are committed to restoring consumer confidence,” said an ABP spokeswoman.

Some critics, however, find the effort to little, too late.

Prime Minister David Cameron called the situation “disturbing” and “a completely unacceptable state of affairs”, adding that the responsibility ultimately fell on retailers, who, he said, “have to be responsible for what they sell and where it has come from”. It seems that many in the public agree, as Tesco’s stock market value has dropped £300 million since the scandal emerged.

Other critics say the Food Standards Agency should bear the brunt of the blame. Anne McIntosh, Conservative MP for Thirsk and Malton, questions why the UK watchdog didn’t pick up on matter soon.

“Why was it left to the Irish?” she asked.