From the majestic trees which reach for the sky to the vast alpine meadows and towering granite cliffs where waterfalls thunder through spring and early summer, everything about Yosemite National Park is immense.

The bears are probably huge too, judging by the “replica” we spy in the gift shop when we arrive in the park’s main thoroughfare, Yosemite Valley. I really hope we don’t see any.

At 3000km² Yosemite is huge, the same size as Rhode Island in fact. It’s beautiful too. Photographer Ansell Adams made it his life’s work to capture the park’s dramatic beauty. With only a day to explore we will only be covering a fraction of Yosemite’s ground but at least we have our very own park ranger, Kari Cobb, to help us make the most of our time here.

Our guide leads us through Cook’s Meadow, a lovely grassy vista only a short walk from Yosemite Valley. Farmers once let their cows and sheep graze here, Cobb tells us, but the farm animals were kicked out in 1890 when Yosemite became a National Park after prolonged lobbying by famous naturalist John Muir.

From here we can see the majestic Half Dome, the broken monolith which dominates the skyline. “But only 20 per cent of it is missing,” says Cobb. “I don’t know why we don’t call it the 80 cent dome.” Probably because “80 per cent Dome” doesn’t have much of a ring to it I want to tell her, but don’t. 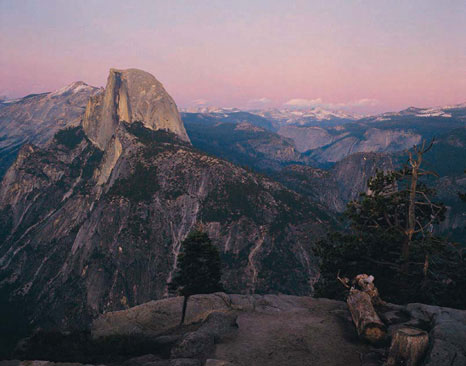 “The summit of the Half Dome will never be trodden by foot,” a guidebook declared in 1868. Ha, if only he could see the ant-like figures crawling over it now. Like all of Yosemite’s striking rock formations, it’s a magnet for climbers and hikers.
From here we can also see the rusty watermark of Yosemite Falls – the highest waterfall in North America, and sixth highest in the world, though it’s not flowing this late in the season.

This is also the place to see bobcats and mountain lions in winter, Cobb informs us. Suddenly bears don’t seem quite so scary after all.

Actually, it comes as a relief to discover the bears living in Yosemite are black bears, not grizzlies, and are not particularly huge or scary. But they can be pesky little varmints, conducting night-time raids on campsites when they get the munchies.

Bears keen sense of smell can penetrate almost anything, so woe betide the camper who hasn’t stored their food properly in an bear-resistant canister or one of the big metal food lockers we see dotted around campsites. Bears view cars as “big lunchboxes,” Cobb tells us and they have been known to smash through vehicle windows for a single Twinkie.

It’s actually a big problem from a conservation point of view because the more human food bears eat, the less wild they are. But while they have been known to demolish a family station wagon, no human has ever been mauled by a bear in Yosemite, Cobb says. You’re more likely to get killed by a deer. 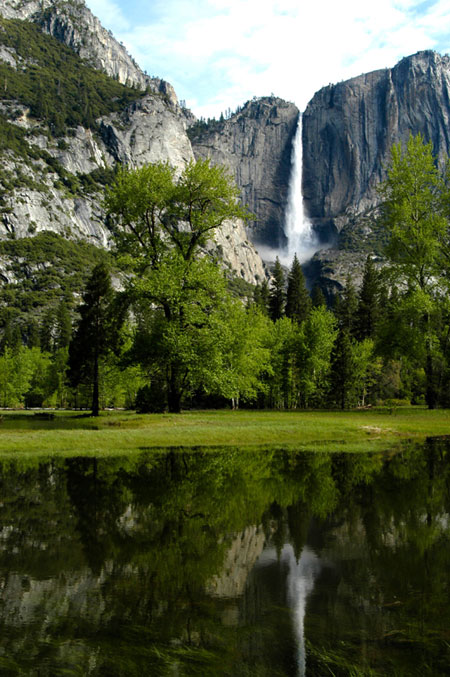 A staggering four million visitors tramp through Yosemite each year, and most of them don’t bother to venture outside the seven-mile-long Yosemite Valley, which is surprisingly built-up with hotels, shops, a post office, a courthouse and jail, and a theatre (well, the staff who live here need something to do in their spare time!).

From here we are put in a car and whisked to Glacier Point, 975m above Yosemite Valley. Amazing, heart-stopping views of the Half Dome and the High Sierra stretch out in front of us.

It’s such a peaceful scene and yet Yosemite’s name has violent origins. The term “Yohhe’meti” literally means “among them are killers” and was used by Native American tribe the Miwoks to describe their murderous rivals. Travelling further we reach Mariposa Grove, home to the mighty Sequoia trees. Their trunks can grow to 7m thick. The most awe-inspiring is the Grizzly Giant, an enormous ancient tree the size of a jumbo which is estimated to be between 1900-2400 years old and has a base diameter of 9.1m.

It’s incredible to think this tree dates roughly back to the time Jesus was born. Like everything else in Yosemite, it’s enough to blow your mind.

Travel across America on a budget

Blink and you’ll miss the sweet little town of Mariposa as you pass through it on your way to Yosemite National Park. But this former goldmining hub, named after the Spanish word for “butterfly” is full of character and well worth a closer look.

The domestic artefacts and mining equipment on show at the Mariposa Museum & History Center (mariposamuseum.com) provide some insight into the hardships faced by those who flocked to the area to seek their fortunes in the early 1900s, and the town’s charming county courthouse is the oldest in continuous use west of the Rocky Mountains.

There’s also some quirky gift and antiques shops and a handful of good eateries (try Butterfly Café’s homemade burgers). The town also makes a good base from which to explore the park. If you’re looking to stay overnight here, you could do worse than classic all-American motel, the Miner’s Inn (yosemiteminersinn.com).

Land’s End And The Sutro Baths
The 19th century baths might have fallen into ruin but this regenerated coastal area still makes for a lovely day out. There’s a manageable coastal hike from where you can enjoy stunning views before installing yourself in the historical, family style restaurant, The Cliff House (cliffhouse.com), famous for seafood. Local man John Martini offers informative walking tours of the area (cliffhouse.com/history/Johns_Walk.html) and can provide a commentary on the many shipwrecks, as well as San Fran’s famous sea lions.

California Academy Of Sciences
Housed in a state-of-the-art, earthquake-resistant, eco-friendly (with a living roof!) structure, the California Academy of Sciences (calacademy.org) combines the best elements of a natural history museum with aquarium, planetarium and a world class research facility. The fun and fascination starts in the entrance with an enclosure housing Claude the albino alligator but the highlight is watching the resident African penguins – bred here for 27 years – at feeding time.

Foodie Heaven
California is renowned for its production of local, seasonal foods. In San Fran, visit the farmers’ market in the Ferry Building on the Embarcadero for locally produced wines, cheeses, olive oils, macaroons and more. It’s also the place to get an organic, Fairtrade, micro-roasted, single-origin, cappuccino! While in the area, taste some bleeding edge local cuisine at Epic Roasthouse (epicroasthousesf.com).

WHEN TO GO: Spring to early summer is the best time to see the cascading waterfalls fed by snowmelt but Yosemite remains accessible right up until the first snowfall (which can happen anytime from October onwards) signalling the onset of winter when access becomes more restricted.
GETTING THERE: Flights from London to San Francisco take approximately 11 hours. The journey from San Francisco to Yosemite National Park takes about four hours by car.
GETTING AROUND: Self-drive is the best way to get around California. See holidayautos.co.uk.
VISAS: Australians and New Zealanders don’t need a visa for stays of less than 90 days. South Africans require a visa.
CURRENCY: 1 GBP = $1.57.
LANGUAGE: English.
GOING OUT: A pint will set you back around $5. Expect to pay even more for boutique beers.
ACCOMMODATION: The Bug is a sprawling, relaxed backpacker hostel just outside Mariposa (yosemitebug.com). For something a little bit more luxurious try Tenaya Lodge, a mountain resort just outside Yosemite’s southern gate (tenyalodge.com).
GET MORE INFO: yosemitepark.com

Related:
USA highlights
Travel across America on a budget