Fabien, the train’s service manager, sings the Green Day classic in his French-Canadian accent, bald head bent over an acoustic guitar, eyes focusing steadily on the strings. He sits at a table by his walkie-talkie in the pale interior of the activity car. Responsible for the safety and wellbeing of the passengers while on board, he likes to sit and play his guitar in the moments the passengers don’t need him.

Along with a group of 12 travellers from all over the world, I’ve just boarded a train at Vancouver that will be stopping off at Jasper, a small Rocky Mountains town, and big city Winnipeg, on the way to Toronto.

The train is due to arrive in Jasper at 4pm the next day and by the middle of the 18-hour journey to Jasper I’ve already paced the entire length of it – this is how I found Fabien at the back. He tells me people in economy class have the most fun, which is a bonus, since that’s where I am. 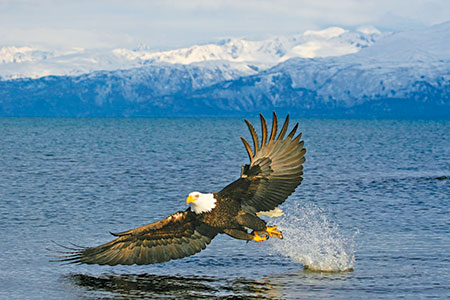 We sit and drink in the bar cars at night, watching the city lights go past until everything disappears into darkness as the train heads into the Rocky Mountains. By day, we gaze out of the windows on the look out for the black bears and grizzly bears that often wander along beside the tracks. You might even see bald eagles, their white heads poking out from the nests at the top of the impossibly tall trees that are so numerous in this part of the world.

Snow-covered peaks rise up to greet us as we arrive in Jasper in the late afternoon. Jasper calls itself a ‘little town in a big park’ (that’d be Jasper National Park, the largest in the Canadian Rockies) and reminds me of Bariloche in Argentina. The two ski villages have that same small town feel, with low-rise cabin-style buildings and trinket-selling shops, set in the midst of grand surroundings (Bariloche sits in the foothills of the Andes in Nahuel Huapi National Park). But where Bariloche has lakes, Jasper has all those lovely, tall Canadian pines.

After a good night’s sleep, we get up to go white water rafting with Maligne Rafting Adventures, about an hour outside of Jasper.

“OK everyone,” says our Kiwi guide, Jesse. “So, there are three different categories of rafting on three different rivers here: class 2 on the Athabasca River, class 3 on the Sunwapta or Fraser rivers, and finally the Kakwa River, which is class 4. Today we’re on the Fraser River.”

Seeing as I haven’t been rafting in years, going easy on the Fraser River is a wise choice. The area is so beautiful that for me it’s enough just to be here without proving my (non-existent) rafting prowess on the scarier class 4 rapids. 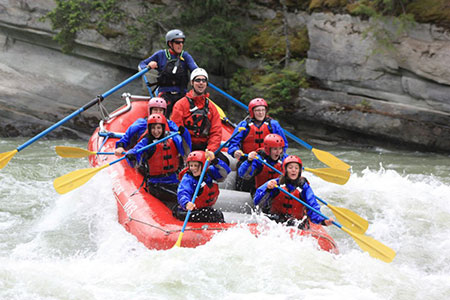 Splashing out: tackle the white water around Jasper

We get changed into our wetsuits amid a flurry of mega mozzies, before joining Jesse for a demonstration of how to rescue each other from the water. Once in our rafts, the river carries us past towering evergreens and great cliffs. “Paddle forward!” Jesse shouts over the noise of the water. “Now backward!”

“Watch out!” she yells, every time we’re about to get hit in the face with water, much of which I take the brunt of, gaining a particularly wet crotch. Super. The next day we embark on a tour of the Columbia Icefield. This incredible expanse of otherworldly white feeds eight major glaciers and some of the highest mountains in the Canadian Rockies teeter at its edges.

As our coach ascends the steep mountain road to take us to the field, the tall green trees become increasingly dusted with snow, until it feels like we’re in a winter wonderland. When we arrive, I buy a red hat with a maple leaf on it from the gift shop (natch) and we board a Brewster Ice Explorer. It’s essentially a coach with thick, tractor-like tyres. 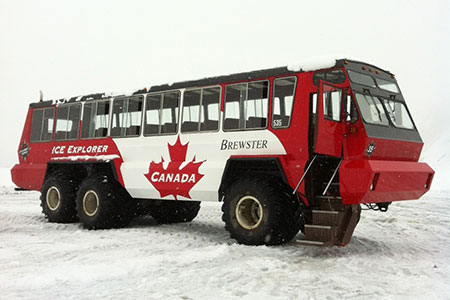 “We’re near Highway 93 – one of the most beautiful in the world,” says our guide as we arrive at the icefield. (Alberta Highway 93 travels over the Rockies and connects Jasper with Lake Louise in the north, affording spectacular views of the mountains.) “This …” – he turns with his arms in the air like he’s king of the glacier – “…is my office.”

We walk out into the white. It’s akin to a desert landscape – if all the sand had been replaced by snow and ice. I’m standing on what is essentially an enormous ice rink, many metres thick and covered with a heavy layer of snow. We gape in awe and make a couple of snow angels before returning to the vehicle and ploughing back down the slope.

On our way back into Jasper on the tour coach, the driver slows down as we approach a car parked by the side of the road. “Often cars will stop because there’s wildlife,” he tells us. 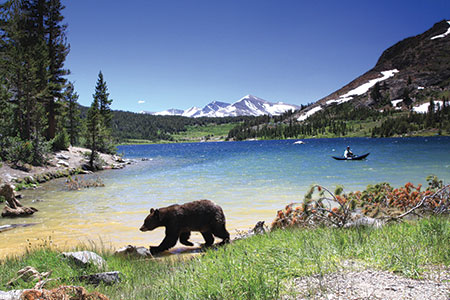 My excitement at the possibility of spotting a grizzly is short-lived – we see that the couple from the car are just taking pictures of each other in front of the mountains. We carry on not too much further and spy a second car parked by the side of the road – and this time I’m in luck. I see my first ever wild bear. He’s a small black creature wandering nonchalantly along the grassy embankment.

This turns out to be the first of two bears I see while on the trip. The second is brought to my attention by a heads-up over the intercom on the train that same evening. The announcer tells us there’s a bear lounging around on the tracks; they often come down to eat grain left behind by goods trains.

This particular black bear is curled over the track as if it’s a log; he’s lazing around like an oversized floppy teddy. I want to get out and cuddle him, but that would delay the train and I’m pretty sure I wouldn’t have much of a face left if I did.

We are now slowly chugging towards Winnipeg. This section of the journey is a long one, stretching overnight and all of the following day. We arrive in Winnipeg at night, have a quick drink at the hotel bar and flop into bed.

The next morning, our group digs into the history of the city with the tour A Prairie Legacy: The Bison and Its People. Winnipeg was a trading centre for the aboriginal people before the Europeans swooped in, and this tour looks at how their history was influenced by the local bison. The animals’ hides were used by the indigenous residents of the area for tipis and robes, rope was made from their hair … they were integral to daily life.

But when the European hunters arrived, bison numbers declined to the point that the species almost died out completely. Although getting up close to the bison is for most the highlight of this tour – the FortWhyte Alive centre that hosts it is dedicated to their conservation – I find myself more taken with the history of the natives than these big furry cows.

The following day, we head to the Manitoba Legislative Building for the Hermetic Code Tour. Sounds boring, right? It turns out to be one of the most interesting tours of the whole trip. This government building was designed by an architect who filled it with Freemasonic symbols, hidden hieroglyphic inscriptions and numerological codes. 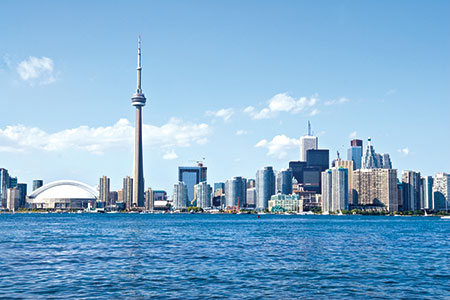 End of the line: finish up in Toronto

The tour follows a trail of occult clues that reveals the hidden meanings behind the building’s design features, the true nature of which escaped the notice of visitors and historians for nearly 100 years. It’s truly unique.

The final leg of the journey is a bum-numbing 34 hours. But in some ways, after two weeks of travelling across Canada, spending a total of four days and four nights on trains, I’m sad these are my last moments on board.

I’ve spotted bears, walked glacial fields and battled rapids in Jasper, discovered the cultural crossroads of Winnipeg and am now approaching the buzzing (and sweltering) metropolis that is Toronto in summer. And yet, after all this time and all of these experiences, I’ve seen only a small part of this vast country. I know I’ll be back for more.

When to go: Summer is high season, as you can best make the most of Canada’s plentiful outdoorsy action (summertime is late May to mid-September). Winter is cold and dark, so best suited to skiiers and city breakers.

Accommodation In Vancouver, The HI Vancouver Downtown hostel has rooms from £20pn.   In Toronto, a bed in a dorm at The Planet Traveler costs from £20pn and private rooms with two beds cost from £50pn.

Getting there Flights from London Heathrow to Vancouver, via Minneapolis, start at about £633 with Delta.

A multi-city trip – from Vancouver to Jasper; Jasper to Winnipeg; Winnipeg to Toronto – starts at about £323 in economy class, with VIA Rail.

Rafting in Jasper starts at £37 for two hours.

Lady Gaga crying during So You Think You Can Dance – video

All Blacks return to their provinces