Visit Canada for a winter extravaganza of ice hotels, frozen waterfalls and sleigh rides. Lucy Corne got her woollens on for TNT.

As I step outside, I can feel miniature icicles forming in my nostrils and it’s so cold it almost hurts to breathe. Welcome to winter in Ontario, where you’ll find up to five months without the mercury rising anywhere near zero, so you might as well embrace it.

After spending the first month of my first Canadian winter bundled up and voluntarily housebound, I decide that I don’t want to simply survive the -20˚C temperatures – I want to relish them, and there seems no better place to start than the country’s oft-overlooked capital, Ottawa.

As one of the world’s coldest capitals, Ottawa really knows how to celebrate winter, with its annual Winterlude festival (Feb 4-21) showcasing ice sculptures, sleigh rides and even a walking tour between the region’s restaurants, braving the cold to eat one course at each venue.

Skating on the Rideau Canal

But nothing says winter to Ottawans like the annual freezing of the Rideau Canal – the world’s largest skating rink at almost five miles long. Having never learnt to skate properly, I’m dubious about joining the precocious, pirouetting toddlers and people speed-skating to work but at least I have something to look at each time I haul myself up from the ice. Ottawa has a glorious, if largely unknown, skyline especially in winter when the Big Ben-like parliament buildings and fairytale facade of the Chateau Laurier Hotel are swathed in snow and backed by an unfeasibly blue sky.

After an hour of brief success and abundant falls, I’m ready for the warming refreshments that are as much of a draw as the ice itself. While the canal is frozen, temporary cabins shoot up offering much-needed hot chocolate and Beavertails, a local pastry doused in cinnamon or Nutella and clearly designed to keep out sub-zero temperatures. If skating to your seat, scalding beverage in hand, seems nothing short of foolish, you can always head to the original Beavertail kiosk in town, as visited by Barack Obama in 2009.

I opt for an ‘Obama Tail’ at the latter outlet before exploring the Byward Market, Ottawa’s food and drink district. Cosy pubs abound, and no trip to Ottawa would be complete without a pitcher of beer and a plate of chicken wings.

Toronto and the Hockey Hall of Fame

Suitably satisfied that I could learn to love the cold, I move from Canada’s capital to its biggest city. Toronto’s temperatures don’t dip quite so low, but it’s far from balmy and I’m grateful to slip into some of its excellent attractions.

The Royal Ontario Museum’s exhibits on natural history and world cultures could probably fill a day, but I’m keen to delve into something altogether more Canadian at the Hockey Hall of Fame. After attempting to block a goal from a virtual Wayne Gretzky and stopping for a pint at the Steam Whistle Brewery, it’s time for the crowning jewel of Toronto’s sightseeing circuit – the CN Tower. Clear winter days offer perfect viewing from the 447m-high viewing platform, and if you’re lucky you might even catch a glimpse of Niagara Falls, 45 miles across Lake Ontario.

In fact Niagara is the last stop on my winter wander, first to view the falls themselves, partially frozen and unbelievably beautiful. Accommodation in the tourist town edging the falls (think Blackpool with a dose of natural beauty) is easier to find in the winter months and tends to be a little gentler on the wallet, so I find a room between the casinos, wax museums and chain restaurants and set off in search of wine.

As I view the inches of snow and witness temperatures cold enough to freeze a river it seems highly unlikely that this could be wine country, but the Niagara region produces some of Canada’s best vintages.

Rather than shying away from the harsh winter, local winemakers actually revel in it, producing Icewine, a sweet after-dinner drink. My final chilly challenge is to join with the annual harvest, which happens only when temperatures plummet below minus 10 for several consecutive days. Grapes are harvested when they’re totally frozen and I can’t resist sneaking one from the vine. It’s like eating grape candy from a freezer – and too moreish to take only one.

For the month of January the whole Niagara region joins together to host the Icewine festival with gourmet evenings and vineyard tours giving you the chance to sample a frozen grape or three without the pain of the subzero harvest. But it was in the tasting room at the Inniskllin Winery that I discover my ideal winter pursuit – warming up with a glass of syrupy sweet Icewine and admiring the snowy landscape from indoors. 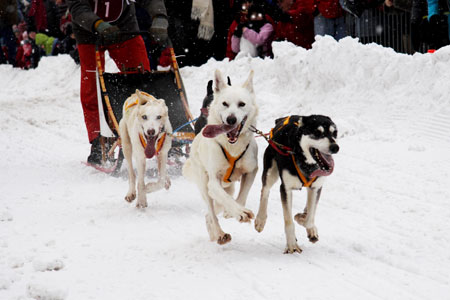 Both Quebec and Ontario offer countless chances to travel in a dog-drawn sleigh in the winter months. A childlike sense of wonder envelops you as you race by snow-sprinkled pine trees at a surprising pace and the pungent smells of a pack of dogs attending to business as they run only increases the juvenile giggling.

Dog sledding encounters can last anything from an hour to a week and, if sitting back to enjoy the scenery seems a little tame, you can seek out the chance to try your hand at mushing a pack of dogs yourself. In Ontario, head to the Algonquin Provincial Park, midway between Toronto and Ottawa.

In Quebec, combine a trip to the ice hotel with a dog-sledding stint or seek out an operator at one of the major ski resorts.

Get more info at canada.travel.

WHEN TO GO: Chilly pursuits are best enjoyed between January and mid-March.
GETTING THERE: Air canada and British  Airaways fly from London to Toronto in six hours. Flights start from £250 return.
GETTING AROUND: Greyhound and Coach Canada operate bus journeys between major cities, while VIA Rail is the train company. Distances are vast and if there’s a group it often works out cheaper to rent a car.
VISAS: South African citizens need to apply for a visa before heading to Canada. A single entry visa costs £45.
CURRENCY: Canadian dollar. 1 GBP = 1.55 CAD.
LANGUAGE: French and English.
GOING OUT: A pint of local lager is $6-8.
ACCOMMODATION: Dorm beds cost from $20-30 and a hotel double costs from $80.
GET MORE INFO: canada.travel.

Innocent Unplugged a weekend off the grid