The short film, shot in the swamps of Louisiana in the USA shows a fascinating encounter between a ferocious feline and a gigantic meat hungry reptile.

As the alligator approaches the bank of a river to snack on chunks of meat the cat fearlessly decides to defend the shoreline. Observers can be heard shouting encouragement to the cat as the massive beast cautiously creeps out of the water. 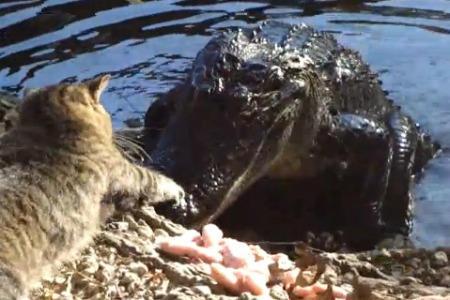 Attack! The cat strikes out fearlessly against the enormous alligator

See what happens next in the video below… 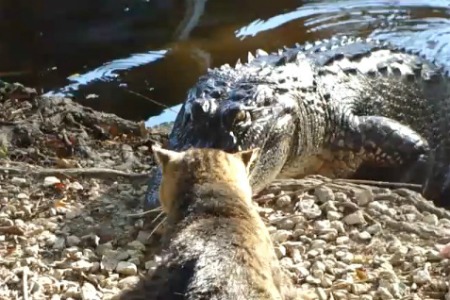 Having feasted on one chunk of meat, the alligator decides this may not be worth the hassle

Upset cat lovers who seem to be under the impression this hardened swamp cat needed rescuing have posted their complaints “You have to believe that these people thought it would be okay to watch a cat get eaten that day.” said YouTube user TheLuchez.

Another user by the name of Fandrix commented “I’m glad the cat is okay but who would just film it like it is not a big deal?”

Club gig Lemonade at The Nest in Dalston has the finest, edgiest and most exciting acts out there

Cheese Bar to open in Camden

London scene: the latest films and entertainment in the city this week, August 27 – September 2