Chatroom – Ed Stafford: The adventurer on his 60-day stint naked and alone on a Fijian island

How did show Naked And Marooned come about?

A couple of years ago I walked the length of the Amazon. I self-filmed it and sold it to the Discovery Channel. It went well so they asked what I’d like to do next. I didn’t want to go away for another two-and-a-half years so I thought if we constrain ourselves to 60 days – how do we make that tough enough? We started taking out things: no help from outsiders, no tools, or food. Then it became – if you were dropped off on a desert island for two months with nothing,
stark-bollock naked, how would you survive?
It’s a pure, simple survival task.

What was the first thing that you did?

It was bizarre. Naked was meant to represent having nothing. When the producer was filming the drop-off in the boat he turned and said, “Time to take your shorts off, Ed.” I gingerly took them off and walked up the beach with the camera equipment, but when I couldn’t hear the motor anymore it smacked me in the face. I thought it’d take a week to start going downhill mentally, but it was almost panic straight away. This might be TV but it was incredibly real!

What were your first objectives?

I didn’t know where there was food or water, and I had to handhold myself through the first day: “Come on, Ed, you know your survival priorities, all you need to do today is find water.” A couple of hours in I found a cave for shelter, too. But I didn’t eat at all on the first day.

Did you achieve your goal of coming out fitter than when you went in?

Yes. I did a series of exercises at the end of each week – press ups, squats, chin ups, shuttle sprints – and my results in the last week were better than when I arrived, but I was nine kilos lighter. Lean as a butcher’s dog partly because I thought coconut flesh was a good source of carbohydrate, but it is 89 per cent saturated fat. I was living off protein and fat with no carbs!

How did the isolation affect you?

It was the biggest hurdle. Before the project I spent a bit of time with Aboriginals who have a simple perspective on man’s relationship with nature. When they do a coming of age ceremony, they spend a period of time on their own in the bush. But they told me I was underestimating how difficult it would be.

They see that you have three brains: first your gut, second your heart and the smallest and least useful is the cognitive brain, the one we use for everything. They said if I lived my life on the island in the logic brain I’d drive myself mad. But they had a tip – make a stone circle near your camp, so whenever you feel fear get in it and tell yourself you’re safe. I did that a lot, and irrespective of my beliefs, it worked. 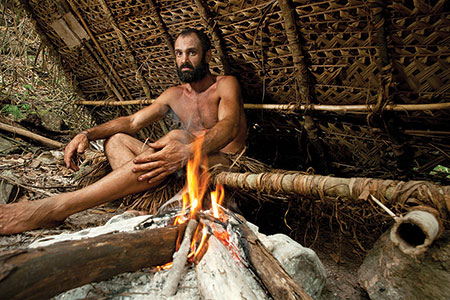 It sounds more about being one with nature than overcoming nature?

There was nothing to combat on the island – no hostile indigenous tribes or venomous snakes. I wanted to use everything around me, live in balance, and create a sustainable life.

After eating raw snails and living in a cave, I knew I could do that but I wanted to evolve, make a house, fire and hunt – to show it’s possible to do that from ground zero.

What did you learn?

I was ill twice and that exacerbated the isolation lows which allowed me to go in to dark patches and question what I was doing.

“You have a life back in London, why are you here? What do you have to prove?” But I came out thinking, “I have an amazing life.”

What has been your driving force?

I’ve always felt we live quite an artificial life, living in cities with millions of people going on the Tube not interacting with each other.

I’ve been leading expeditions since 2002 and when you give people a roof over their head and a hammock to sleep in it’s amazing the amount of smiles that come from that.

There is a purer enjoyment there, rather than putting chemicals in your body or getting drunk. But it is not just thrill seeking, it is clean living.

Sir Ranulph Fiennes said your Amazon trek was one of “the most impressive expeditions, past and present”.

Yeah. I am still glowing about it two years later. He has always been a hero of mine.

He came to speak about team leadership at [military base] Sandhurst and when I came back he made me the youngest trustee at his Transglobe Expedition Trust, which looks at young people’s expeditions that are worthy of giving grants to.

So what comes next?

Spend some time with the family!

Naked And Marooned With Ed Stafford airs from March 14, 9pm, on Discovery Channel

Essential handbag make-up for summer and beyond…