You spent 10 years making this movie about the Ouvéa cave hostage incident in 1988, in which France clashed with New Caledonians wanting independence on the Pacific island colony. How did you keep your focus?

When you say to a family you will go all the way with the project with their help then it is difficult to say no. There was never any time in those 10 years when I thought ‘I am going to stop’. It was also about the commitment to France.

What made you tell the story from [negotiator] Captain Philippe Legorjus’ point of view?

That character was the reason why I thought the movie should be made. He was in the middle of the political drama as the story unfolded. He had to confront the orders he was given with how they contradicted his own personal morality. I used that as the centre for the movie.

Phillippe is important as he is the audience, too, and we discover the Kanaks [indigenous New Caledonians] through his eyes.

How did you and he work on the script?

He didn’t give me notes on the script so much but we did work closely by talking about the story. I compared his experience with the experiences of other witnesses I interviewed. It helped him get a clearer understanding of what happened around him, and why it happened.

We worked very closely and conducted the investigation [into the events] together. When Philippe and the Kanaks saw the film they agreed it was very close to the actual experience.

Is it tempting to take a little cinematic licence when making a film like this?

It [the hostage incident] only happened 20 years ago, so when you do something that is as contemporary as that, there are still people alive who were there, so you want the film to be as close to the truth as you can. A movie like this is going to carve the story in stone. It is going to be a memory for people and a launchpad for discussions, so being accurate is important.

When did you decide to play the lead Philippe yourself? You hadn’t originally intended to cast yourself.

No, I had other actors interested in the role, but I couldn’t hire an actor when I wasn’t sure we’d ever actually shoot, with the obvious consequences for the film’s funding that carried. That was why I decided I had to play that character. Through all the work that I did before the movie was even greenlit, negotiating to get all these people together, I almost became the character. 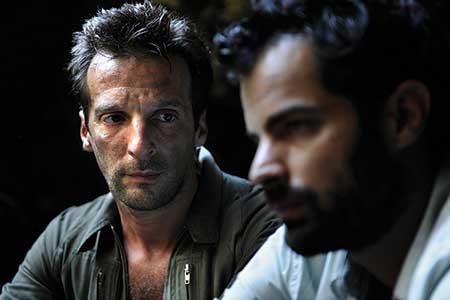 Was it tough being the lead actor, director and writer?

It sounds exhausting. It is not that exhausting, actually. It is more exhausting to fight with an actor who is not doing what you want. When you don’t have that actor messing with you, it’s less of a problem. You are not going home every night thinking, ‘He’s such a shitty actor’ or ‘What a diva!’

How did you cast the Kanak rebel leader, Alphonse Dianou?

It was difficult. It was like if you had been trying to cast someone to play Bob Marley – the kids might be unsure if they want to take on the weight of such an iconic role. Are they going to be able to walk the neighbourhood with people wondering, ‘Who do you think you are to play someone like Bob Marley?’

In casting Alphonse it was important to find someone who was related to the story, who was Kanak, and who also understands what the movie’s about. Then we found Iabe Lapacas, who’s actually becoming a lawyer right now. He was very smart and knew the responsibilities of the role and of the film. And he was also related to the family of Alphonse which helped a lot, too.

Your last film as director, 2008’s Babylon AD, was mired in studio problems – would you like to make a Hollywood movie again?

Yes, I would like to. I like both personally driven movies and commercially driven ones. But for both of them you need to have the right partners, and with Babylon AD I didn’t. It never goes right when that happens. I learned from that experience that you need to work with the right people. So now I am working with different people in Hollywood on a new project.

Anything you can tell us about it?

Not yet. In Hollywood, it’s never done until it’s up there on the screen!

Rebellion is out April 19 through Lionsgate