With cries of jubilation, tears of relief and embraces with exuberant relatives, the 33 Chilean miners trapped underground have been brought to safety.

After an epic 69 days spent 2,000ft underground, the men were hoisted the rock one by one in a rescue capsule, dubbed Phoenix.

All wearing sunglasses to protect their eyes, the miners, who were given up for dead for two weeks when their mine caved in on August 5, had wives, children, relatives – and, in some cases, mistresses, waiting for them.

At 4.04am yesterday, Florencio Avalos was the first to emerge from the capsule, smiling broadly as he arrived at the surface of the San Jose gold and copper mine in Atacama.

He was hugged by his sobbing seven-year-old son and his wife and the President Sebastian Pinera, before crying: “I was with God and with the devil – and I reached out for God.”

Scroll down for video 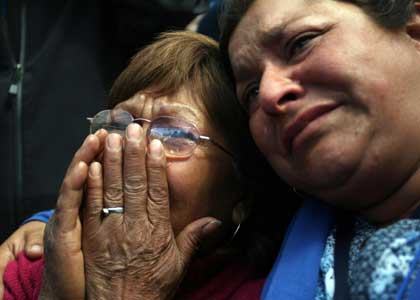 Second to be rescued was father-of-four Mario Sepulveda, whose screams of joy could be heard even before Phoenix emerged.

“I’m so happy,” he shouted, before embracing his wife and punching the air – he then handed out chunks of rock that he had brought from half-a-mile underground.

The rest of the men emerged like clockwork, with each rescue operation taking around 40 minutes.

Every miner was greeted by cheers from the crowds of overjoyed Chileans and cameras broadcasting the momentous event across the globe.

“Welcome to life,” President Pinera told Victor Segovia, who was the 15th miner brought to safety.

Luis Urzua was the last of the trapped men to be freed at 1.55am
(4.32am UK time). The shift foreman has been credited with being the
calm leader who guided his colleagues through the dark hours.

The 54-year-old ascended smoothly as the 22-hour rescue operation drew to a close. 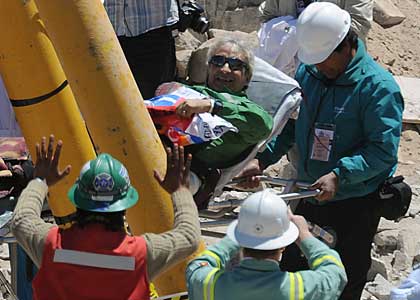 He told the crowd of 2,000 Chileans: “We have done what the entire world was waiting for.

Medical teams were on hand to treat the miners, some of whom have been struggling with illness.

Bolivian president Evo Morales was there to greet Bolivian miner Carlos Mamani – the only foreigner in the group.

The miners spent some of their time underground thrashing out a legal agreement to split any proceeds they make cashing in on their stories.

It is thought they could pocket £300,000 each for rights to a film about their experiences.