As the death toll from New Zealand’s earthquake mounts, Christchurch residents are leaving the city in their hundreds. Roads out of Christchurch are gridlocked and planes full as locals and tourists begin an exodus of the city.

Meanwhile, rescue workers continue their work despite aftershocks shaking the ruins of a city already demolished by the earthquake.

300 people are still unaccounted for following Christchurch’s 6.3 magnitude earthquake and 75 have been confirmed dead.

According to Christchurch police, more than 100 people may have been lost in the Canterbury Television (CTV) building. Rescuers are no longer holding out hope that any of the 100 inside may have survived.

Aussie who phoned home after Christchurch earthquake is rescued

About 22 people caught by the collapsing Christchurch Cathedral front are also believed to be dead. 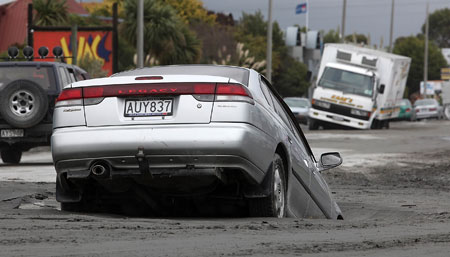 Miraculous rescues have been reported too. 29 people were brought out alive from the PGC building after earthquake flattened the building.

Carl Stockton, a construction worker, made his way to the site to volunteer as soon as he heard that there were people trapped inside.

“As soon as you hear the voices you just want to dig and dig,” he said.

“And when you pull them out its the best feeling in the world. The adrenalin kicks in and you go into autopilot, (and) I was swinging that hammer like a madman.”

Many of those who have survived, still face the prospect of their homes being devastated. Leaving Christchurch, at least for now, is the only option for many residents.

The declaration of a national state of emergency means that the usual air-noise curfew between about 1am to 6am can be broken and flights are able to arrive and leave Wellington Airport throughout the night.

Air New Zealand alone added more than 1600 seats to its normal services out of the city and is expected to take at least two planes – mostly of tourists – from Wellington to Auckland overnight.

The air force is also planning up to five return flights to Christchurch, as some residents who have been away make their way back to survey the earthquake’s damage.

The Sami people of northern Scandanavia

Henry Winker aka the "Fonz" honoured for dyslexia work