It wasn’t before putting his side in the box seat for the second Test in Adelaide though and giving them the best chance of taking the series to 2-0 after losing the opposing series 3-0.

The Aussie skipper went to lunch on 109no after he and Brad Haddin (who else?) resurrected Australia’s innings with a 132-run stand, starting the night before.

The knocks came after a mixed day one of the second Test that ended with honours more or less even. 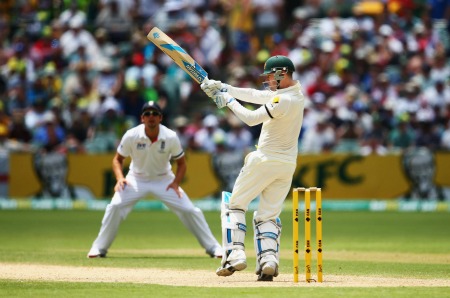 Both went on with it after some work from the Adelaide Oval catering crew though, resuming at 5-389 after racking up a comfortable enough 116 runs without a wicket falling in the morning.

Clarke reached his 26th tonne and is closing in on Allan Border’s 27 – this makes his the sixth Aussie and 15th of all time.

He likes the Adelaide Oval too – this is his sixth 100 in nine Tests at the venue, and the 12th overall since he became skipper.

But he’ll be annoyed to have fallen with a leading edge to the first ball of a Ben Stokes spell, the first wicket of the bowling all-rounder’s Test career. 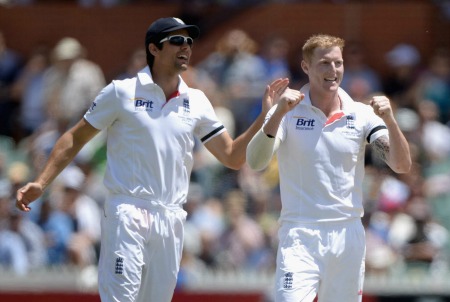 Haddin has loved playing the Poms, almost saving the first Test in England at Trent Bridge when the Aussies had no right to and tormenting them in the first Test at home in Brisbane.

He racked up his 15th Test half-century with 57 before lunch on day two and brought up his 100 in the 141st over with 11 fours and four sixes.

The keeper was lucky to be there though, after Michael Carberry dropped him late on day one and Ben Stokes had him out caught behind on 51 but for a front foot no ball. 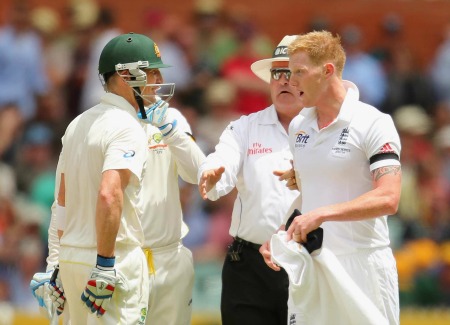 Another impressive innings regardless.

The debutant all-rounder got plenty of lip service in afterwards in a heated mid-pitch discussion, but as ever Haddin kept smiling.

It took South African umpire Marais Erasmus, keeper Matt Prior and Clarke to keep them apart.

Once Clarke was gone the Aussies didn’t stock racking up runs, with Ryan Harris coming to the crease to smash 55 off 54 balls.

When Broad removed Haddin for 118, caught behind by Prior, Clarke called in the troops to ready for a bowl.

England will surely have learned from Brisbane, when they were out too many times playing at balls they should have just left alone – Johnson bowled just 10 of his 229 deliveries on the stumps. But the big leftie gave Cook a 148kmh rocket that he could neither leave or get anywhere near as it clattered into the stumps to give Australia the perfect platform to go on and win the Test.

At stumps Michael Carberry is 20no – though Australia will have wished they reviewed an LBW shout – and Joe Root, moving up the order to No 3, is 9no.

Entertainment – Stripping for a living

Best Airlines from the USA to London in 2018