The 78-year-old who’s famous for having a fast mouth and sharp tongue when it comes to making bitchy stand-up comments about fellow stars, gets stoned on medicinal marijuana on the We TV channel show with her friend Lynne.

The pair locate a dodgy doctor who writes them a prescription for the drug, which is legal in California for medicinal purposes. After a smoking session in Rivers’ car the pair stop by a fast food truck to satisfy their craving for the munchies.

In the episode shown on US TV this week Joan’s daughter Melissa refers to the pair as Cheech and Chong – the 70’s stoner film comedians – and Joan hilariously ends up fully clothed in a Jacuzzi drinking pool water from her shoe. 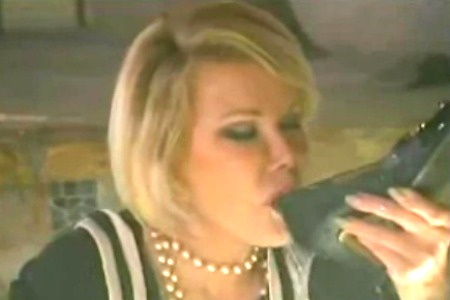 Rivers, who has recently appeared on British TV show 8 out of 10 Cats and regularly performs stand-up in London, has a history of using weed smoking to ease the pain of her many plastic surgery procedures.

She told the Huffington Post “Well, I had a very difficult moment there after the surgery and I got medicinal drugs. In California you get medicinal marijuana. You go to a doctor and you say I’m blue and he says here. It’s amazing, I was in shock. And I got it and I smoked it and had a great time.”

‘There is no criminal element to Rebels outlaw motorcycle club’, claims leader