Playing psychedelic mini-golf at 1am underneath the café in Kreuzberg’s gritty Gorlitzer Park is precisely the experience I was hoping to get from ‘couch surfing’ with a Berlin local. Germany’s capital is such a popular alternative nightlife spot nowadays, most attempts at getting off the beaten path are met by a crowd of fellow native English speakers who got there well before you.

But as I swing my club around these 18 trippy holes, moving through rooms that vary in theme from ‘under- the-sea’ to ‘cyberpunk-jungle’ – and all of them bathed in a bonkers UV light – I have the unique pleasure of swigging beer and potting balls as the only non-Berliner in attendance.

It’s thanks to Dennis Elias, a 32-year-old soul singer who resembles a more delicate version of a Thelma And Louise-era Brad Pitt, that I’m here tonight. I found him on 9flats.com, which pitches itself a little grandly as ‘couch surfing 2.0’. The idea is that you make contact with a local who has a spare room for short-term rent, meaning that you get your own space and some valuable insider tips for about the same price you’d pay at a hostel.

Dennis is a particularly helpful host. When I arrive at his flat, he sits me down in the kitchen and shows me an A4 sheet of paper on which he’s scribbled recommendations – front and back. Not only that, he’s numbered them and then transferred those numbers on to a map, so that I can find each place with ease. By the time he shows me my room – where there are chocolates on the pillow, and a basket furnished with fresh fruit and apple juice on the table – I am thoroughly ready to marry Dennis. 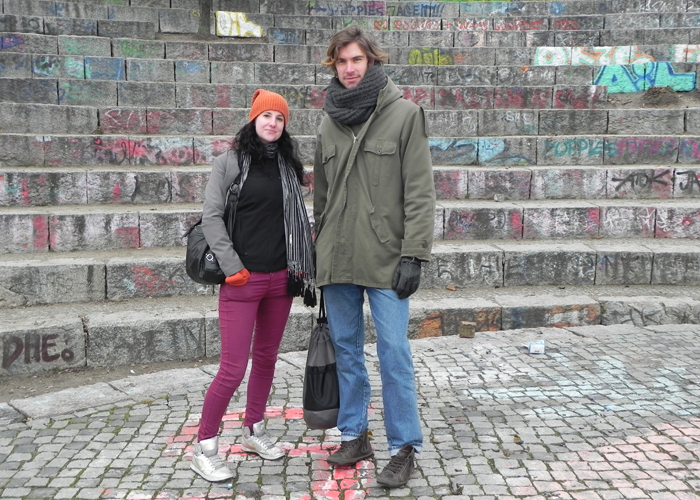 Up-and-coming Kreuzberg is his top tip. When the city was divided, this area fell to the west of the wall, but was very much east of that side of the boundary. It became a ghetto for the counterculture; left-wing punks and immigrants moved in. Then the wall came down and they found themselves smack-bang in the centre of the city. ,/p>

The area has held on to its alternative, unpolished feel, and is home to a large Turkish population (some call it ‘Little Istanbul’). Dennis recommends I seek out the Turkish market around Maybachufer. Here, a short stretch of stalls sells funky T-shirts, garish-in-a-cool-way underwear and reams of fabric, bought up by the local hipsters to concoct their own creations.

Indeed, it’s easy to see that Kreuzberg is fast becoming Berlin’s favourite hipster hangout. Countless arty bars and restaurants squeeze in between gaudy casinos and kebab joints – just wander down Oranienstrasse and take your pick. New galleries pop up regularly, too. I stumble into Mai Foto on Dresdenerstrasse, where a collection of travel photos is mounted on lightboxes. Ending up at alternative mini-golf further proves this is Berlin’s ‘place to be’.

The area I’m staying in, however, is Prenzlauerberg. This was more like Kreuzberg not so long ago; creatives squatted in its war-torn buildings and opened up bars and art spaces. Today, it’s looked upon by the cutting-edge set as “too clean”, Dennis tells me. Developers moved in and spruced the place up, attracting families. 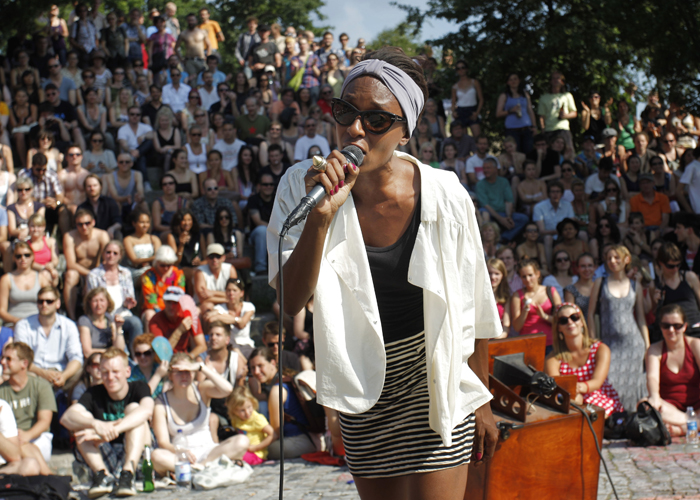 Still, there are remnants of its more avant garde recent past. A five-minute walk from the flat, Galleria Zia Maria is a pizza-restaurant-cum-art-gallery. I’m served some exceptionally tasty slices in the most surreal of surrounds; white duvets are stapled to the ceiling and walls, covering every inch of space and converting diners’ chatter to soft murmurs, while a black-and-white film is projected on to clouds of fluff suspended from the ceiling. It’s a visual installation called ‘Seventh Heaven’. Every six weeks or so, a new installation takes over the restaurant, so you can never be sure what environment you’ll be eating in.

On Sunday afternoon, Dennis takes me to the flea market at Mauerpark. It’s a warren of stalls selling everything from vintage cameras to Sixties- and Seventies-style furniture, by way of granny-chic jumpers and an embarrassment of strudels. In summer, there’s a chill-out area with a DJ spinning electronica, and live bands set up on the grass. Dennis walks me over to a graffiti-blanketed stone amphitheatre – he tells me that it hosts open-air karaoke when the weather is better, and attracts crowds of hundreds.

I ask him why he thinks Berlin is such a creative city. “People couldn’t express themselves for so long,” he responds. “So I think it’s all coming out now.”

And I’m sure he’s right. Even outside of the city’s funky galleries and bars, storeowners paint their shop fronts, murals decorate apartment blocks, and I’ve never seen so much graffiti. It’s as though the capital is a canvas, on which its residents are not only expressing themselves, but also marking their territory. (See also the ‘Berliner backyard culture’, wherein many backyards beyond the city’s apartment block gates have been turned into showcases for street art).

The new threat, of course, is the developers who come in and capitalise on ‘cool’, forcing prices up and the people who created it out. As we stroll the flea market, Dennis expresses surprise that it’s been going for a decade. “I hope it’s left alone and remains the people’s place,” he says. I tell him that nothing can last forever, and he agrees. But I really hope I’m not right.

Get back in the saddle says Ruby