Cyclists in London dressing like bicycle police to slow down motorists

Makers of the clothing admit that the word “POLITE” looks similar to “POLICE”. 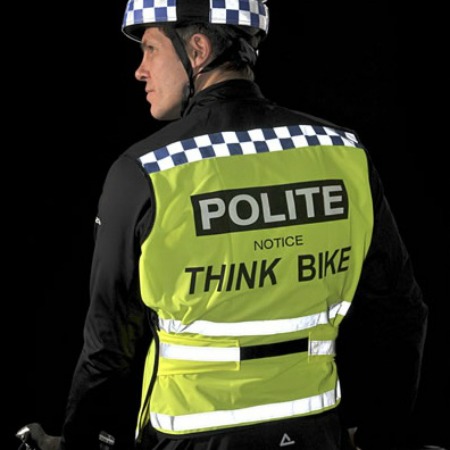 Nicky Fletcher, managing director of Equisafety, said: “People who buy them are not stupid. They do look very similar. That is why they are buying them. The cyclist is not breaking the law. He is not trying to impersonate a police officer. It’s a trick of the eye but it slows the driver down.”

The idea caught on among cyclists quickly, and was spread on blogs and reviewed in cycling magazines.

Equisafety pressed ahead with the design after being assured by Met commander Bob Broadhurst that it was not illegal.

Ms Fletcher said: “One cyclist told us it was like a ‘force field’ around him.”

Rebekah Brooks was awarded £10.8m in compensation by News Corp