In a revelation as controversial and earth-shattering as Watergate, David Cameron has come out and apologised for allowing “a confusing picture” to emerge about whether he did or did not ride the horse, which was retired from service with the Met police when Brooks took over its care.

A spokesperson would only say that Cameron ‘probably” did ride the horse, but would not confirm that he did. Cameron has since come out and confirmed that he did ride Raisa during a riding expedition with Mrs Brooks’ husband Charlie, whom Cameron has know for more than 30 years.

He said: “I am very sorry to hear that Raisa is no longer with us and I think I should probably conclude by saying I don’t think I will be getting back into the saddle any time soon.”

Ensuring that he was not ‘tarnished’ by any of this equine nonsense, Mayor of London Boris Johnson has stated that he did not at any point ride this retired Met horse, adding: “I count myself roudly as a non-member of any kind of Chipping Norton set,” referring to the Oxfordshire village in the vicinity of which the Cameron and Brooks have homes.

Sorry? What was that? You want a close up of our simulation picture? You got it. 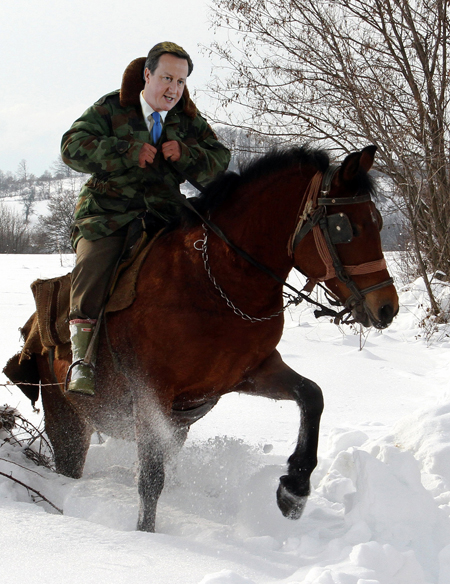 Ricky Ponting scores his 82nd century in his last ever first class match for Surrey, plus video

Carter, McCaw back for All Blacks

Rise of the Planet of the Apes – film review