David Cameron and Nick Clegg received a telling off from top doctor David Nunn as the pair tried to get in a photo-op at Guy’s Hospital in London.

As Cameron and Clegg posed beside the bed of a patient, furious orthopaedic surgeon Nunn burst in, berating the prime minister’s entourage for not following the ward’s hygiene rules. 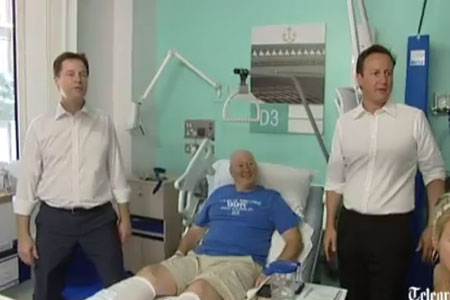 After making his announcement, Cameron and Clegg posed with a patient, not expecting the furious arrival of David Nunn.

In front of a bevy of TV cameras, Nunn burst in, gesturing at the gaggle of reporters, who had not scrubbed (in their defence, Cameron and Clegg had, apparently, obeyed hospital procedures). 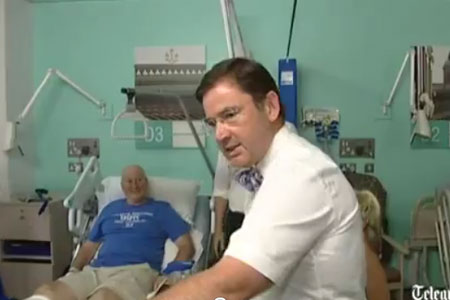 Having Nunn of it.

“Excuse me, I’m the senior orthopaedic surgeon in this department,” rants Nunn.

“Why is it that we’re all told to walk around like this, and these people… I’m not having it.” 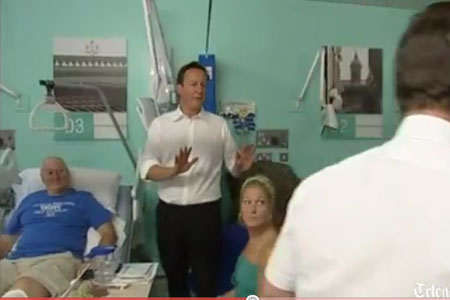 The fuming orthopaedic surgeon is led out of the ward as Cameron says to the TV crew, “Why don’t you disappear.”

As he storms out, Nunn can be heard shouting, “I’m just not having it!”

Comments on Youtube, where the Cameron/ Nunn showdown has been watched with glee include:

“Great doc! Love him. These rats spend their time cutting budgets and then want photo ops to get re-elected!”

While a Twitter user wrote: “Dr David Nunn is my hero, throwing out Cameron and Clegg out of his ward at Guys in London.”

And: “It’s people like David #Nunn the surgeon who told #Cameron & #Clegg to leg it that make the #NHS great.”

On a more serious note, yesterday Cameron announced plans to shelve his proposed radical NHS shake-up, saying it would now be a process of “evolution not revolution”.

The PM said: “We have listened, we have learned, and we are improving our plans for the NHS.”

Changes include allowing hospital doctors and nurses, as well as GPs, to take charge of commissioning from bureaucrats.

A 2013 deadline for reform has also been abandoned and there will be more controls on the competition between private, voluntary and state providers in the NHS.