Day of the Dead in Oaxaca, Mexico – what really happens

Day of the Dead in Oaxaca, Mexico, is the most authentic experience you’ll have of the Mexican celebration of the dead.

Smling skeletons leer at every turn, candy skulls are hawked at each corner and an old lady dangles a flame-haired zombie in my face. The afterlife is all around me as I mingle at Mexico’s Day of the Dead celebrations, where the locals commemorate the return of their loved ones from the spirit world.

Drink with the dead

Rather than being a time of mourning, Day of the Dead is a time for celebration when the dead can once again share a drink and ‘eat’ their favourite meal. Painstaking preparation ensures everything is perfect for the return of the departed. Altars are erected in homes and graves are elaborately decorated. Because Mexicans believe the spirits can absorb the energies of food and drink, the favourite dishes of the deceased, usually tacos and mole, are cooked ready for consumption and their favourite booze, often tequila, is opened to honour them. 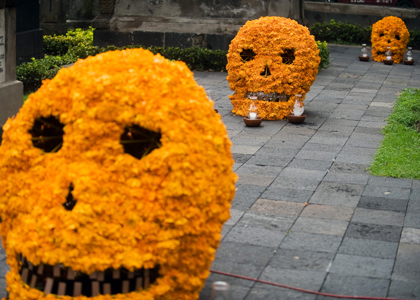 Life and death in Mexico

At Panteón General, a large cemetery, students busily create incredible Day of the Dead ‘carpets’ from coloured sawdust and sand. Their brilliant images of grinning skeletons and religious icons blur the divide between tradition and Catholicism.

Families arrive to dress graves with flowers and candles. Each element has a special significance: water represents the source of life; candles mean faith, hope and light; fresh flowers show the impermanence of life; copal incense is burnt to clear away bad spirits and to help the dead find their way home; and an arch made of sugarcane signifies the passage between life and death.

In the evening, on the way to another cemetary in Xoxocotlan, events take a surreal turn for me and my posse of Aussie ‘deadheads’ as our western attitudes to death are seriously challenged. The streets leading up the cemetery are lined with bars and food stalls so that everyone can get into the ‘spirit’ of things. A few tequila sunrises warm us up as we sit and watch the crowds flow past and it’s such a fiesta atmosphere that it’s easy to forget that dead people are around us.

BOOK A TOUR OF MEXICO

Entering the cemetery is like stepping onto the set of Beetlejuice. Decorated graves are lit by candlelight, and families of the deceased hold vigils in the hope of reconnecting with the other side.

The air is thick with incense and alive with songs softly murmured into the darkness. Our presence would feel intrusive if there weren’t so many Mexican tourists brandishing camera phones and posing for photos behind gravestones. 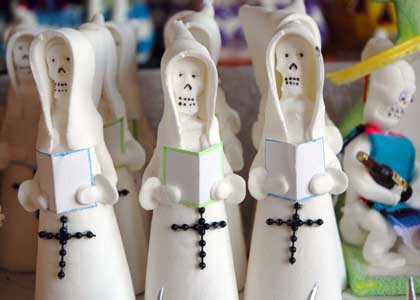 Bread of the dead

The fever behind the build-up to Day of the Dead is incredible; the Mexican people can spend all year preparing for the event and take the customs and their beliefs very seriously.

Paper bunting hangs on almost every ceiling and across streets, and wispy skeletal faces rustle in the breeze. Bakeries offer massive piles of Bread of the Dead – round loaves encrusted with a cross and skull. Candy skulls decorated with luminous icing and sequin eyes glint like jewels in the sunshine on the steps to the town hall.

Alongside, sugar models of your dearly departed’s favourite food or a quaint coffin with a tequila drip are sold. Since death spares no one, all types of human kitsch figures are crafted from fondant and paper-mâché; there are miners, nurses, soldiers, teachers and even prostitutes.

The festival has its origins in Aztec culture and shouldn’t be confused with the Halloween celebrations we’re familiar with.

The main celebration dates are from October 31 to November 1, but from October 28 the souls of those who died violent deaths can return. The 29th is the day for the unbaptised; lonely souls come back on the 30th; and at 3pm on the 31st the ‘Angelitos’ (or children who died after being baptised) return until 3pm on the 1st, making way for adults to step back into the world of the living for a day.

Those in the know reckon Oaxaca has the most authentic Day of the Dead celebrations in Mexico due to its large indigenous population and keen sense of tradition. Locals also recommend Pátzcuaro, a small island in a lake of the same name, near the city of Morelia in the state of Michoacán. Here you can see the whole island lit up at night with candlelight and groups of young Mexicans flock there for the all-night drinking bonanza. 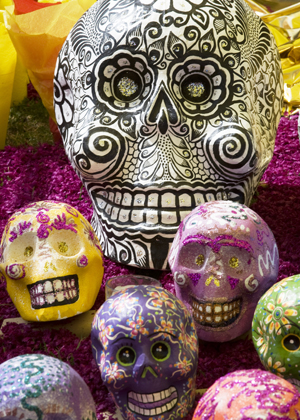 It’s been a long and emotional few days in Mexico and my newly-opened eyes are no match for sleep. It won’t be my final rest by any means, but as I drift off I decide that, after the spiritual immersion I’ve experienced during the past few days, if I was dead I would definitely return to partake in the festivities at Oaxaca.

Head to Guanajuato, in Mexico’s Northern Central Highlands, a colourful city with subterranean streets. Just outside of town, a Mummy Museum houses unclaimed corpses, perfectly preserved in the temperate climate. Most are naked but some still have the remnants of their socks sagging loosely at their ankles. The most shocking ones include the mother with the unborn child and the woman who was buried alive, her hands clawing at the coffin roof and her mouth open in a scream.

Next door, the Salon of the Cult of Death displays such delights as rusty old chastity belts, a spiked coffin complete with a tortured skeleton left in purgatory since the Inquisition, ‘scary’ holograms and the world’s smallest mummy, a bandaged foetus. Not for the faint hearted!

Described as ‘crunchy and like dry roasted peanuts’, chapulines (salted grasshoppers) are more popular than nachos in the state of Oaxaca. Visit the market to see baskets stacked high with the deep-fried critters.

Dig into the classic mole poblano; chicken breast smothered in a thick chocolate and chilli sauce, served with rice. It’s rich, spicy and sweet all at once. Every Mexican family has a secret recipe but for the real McCoy, try it in its birthplace Puebla.

It would be hard to have a night out without Mexico’s most famous export: tequila. The worm is a marketing ploy aimed at gullible gringos, though in Oaxaca you may want to get an authentic side dish of ‘worm powder’ with your shot: fried larvae ground with chilli peppers, salt and lime.

Should you overindulge in the Copper Canyon town of Creel, then head to the Hospital for Hangovers, where they swear that a drink made from ant excretions will ease any sore head. 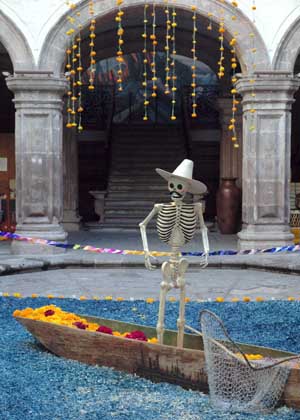 WHEN TO GO: October 28 to November 1. Temperatures in Oaxaca range from 12-26ºC with cool nights and sunny days.
GETTING THERE: It’s cheaper to get a non-direct flight and transfer in Canada or the USA. Flights range between £500-£700 to Mexico City or find a cheap deal to Cancun from £350. From Mexico City or Cancun, take an internal flight or go overland.
GETTING AROUND: The bus is king in Mexico. With ‘premiere clase’ you will get aircon and fully reclining seats, and there will always be a very loud action movie playing!
VISAS: A tourist card is issued on arrival. Kiwis get 180 days and Aussies and South Africans up to 90.
CURRENCY: Mexican Peso. 1 GBP = 19.8 Mexican Peso (MXN). US Dollars are widely accepted.
LANGUAGE: Spanish.
GOING OUT: A litre of beer is about 20MXN from a store, and about 10MXN for a 330ml bottle in a bar.  Eat tacos or hot dogs on the street for about 10MXN.
ACCOMMODATION: You will pay from 60 to 120 MXN for a dorm in Oaxaca and between 80– 150 for a basic hotel room.
GET MORE INFO AT: visitmexico.com