Debt crisis ’caused by YOU borrowing too much’ – David Cameron

The prime minister is expected to give a speech today at the Conservative conference in Manchester today outlining who is to blame for the current economic crisis – and blames not just bankers and businesses but individuals too.

His speech looks to be a shake up for British households, a slap on the wrist for getting into debt and advice to pay off your debts as soon as possible.

Personal credit and store card debts are a target for Cameron as he attempts to put the country back on track. He'll argue that the time has come for "urgent action" in this "moment of danger" for the global economy.

"This was no normal recession. We're in a debt crisis. It was caused by too much borrowing by individuals, businesses, banks and most of all governments.

"The only way out of a debt crisis is to deal with your debts. That means households – all of us – paying off the credit card and store card bills. It means banks getting their books in order."

Despite pointing the finger as part of the problem, he'll also be encouraging a boost in morale through what he calls the "spirit of Britain"

A Labour spokesman said "The Conservatives are giving away hundreds of millions of pounds to the banks in corporation tax cuts – the wrong choice in a time of scarce resources," 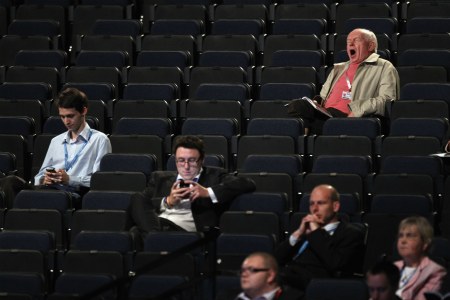 An audience at the Conservative conference, yesterday – Getty images

Meanwhile elsewhere during the conference, a row over a cat erupted. Home Secretary Theresa May said in a speech yesterday attacking the Human Rights Act that things needed to change – and used the example of a foreign criminal who was allowed to stay in the country due to him owning a pet cat.

Justice Secretary Ken Clark ridiculed the accusation and challenged her to a bet that the story was inaccurate.

"I cannot believe anybody has ever had deportation refused on the basis of owning a cat. I'll have a small bet with her that nobody has ever been refused deportation on the grounds of the ownership of a cat." he told the Daily Telegraph,

"It is these daft misinterpretations of the Act which are giving the whole thing a bad reputation, when we should be a force in favour of human rights and individual liberty."

Swim, drink and dance at the Ivy Pool Club