It is if you’re stunt driver extraordinaire Terry Grant, who’s sitting next to me in the passenger seat of a Peugeot 206 GTI.

We’re at Santa Pod Raceway, in Northamptonshire, 50 minutes from King’s Cross St Pancras, to celebrate the launch of driving game Ridge Racer Unbounded by attempting some of the stunts in the game.

I nod confidently at Terry – who’s earned himself a world record with his driving stunts. How hard can it be?

He tells me to put my foot down, which I do, not getting out of first gear – then he gives me the signal. 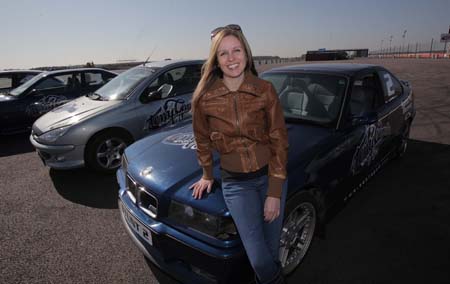 And… I manage to forget everything he’s told me. My right foot goes for the clutch, I don’t turn the wheel enough or pull the handbrake with enough rigour. We come to an embarrassingly bumpy halt.

Terry simply laughs and tells me to do it again, which I do. And to coin a Simon Cowell phrase: I nail it.

The car halts abruptly, and I’ve managed to swing it 170 degrees. Happy days.

Next, it’s on to donuts. My instructor, John Moore, tells me these are easy, which I don’t believe, but it turns out he is right. 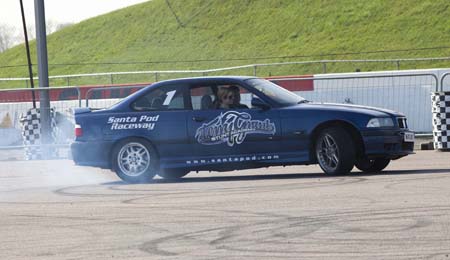 Driving a BMW M3 in a circle, with the steering-wheel just off full-lock, I slam my foot on the throttle, getting the engine to about 5000 revs.

So far so good, as the back-end starts spinning around, while the tyres screech around the tarmac. I’m beginning to feel quite smug.

I’m a little more nervous about my third challenge – driving a car on two wheels. OK, so there’s a stabiliser attached to one side of the car, but it doesn’t seem to make it any easier.

The three confident guys who go before me all end up bouncing the Peugeot to the ground as soon as the left-hand wheels are off the ramp which you drive up to push the car on to its right-hand side. 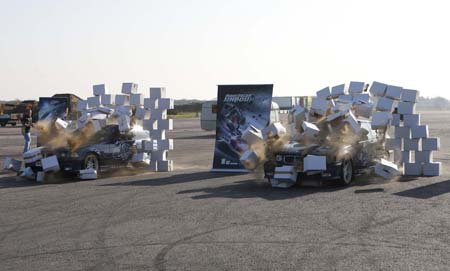 As I get in the driver’s seat, Moore sits in the back behind me to make sure the weight’s on the right side of the car, he tells me I’ll get it first go. No pressure then.

I follow his instructions and drive at about 10mph towards the ramp – the left side of the car goes up nicely, and we drive off the end … and we’re on two wheels.

I keep the vehicle balanced – there’s no safety helmet and my window is open, so I’m just inches away from the ground – and carry on driving until Moore tells me to stop.

Pleased with myself, I return to the others, who congratulate me while saying they only got it wrong so I’d look good. 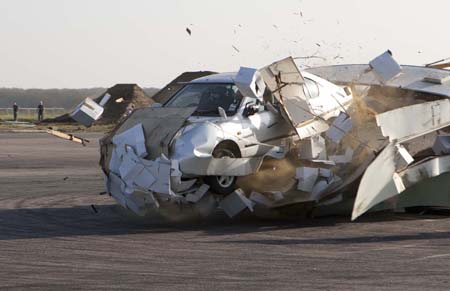 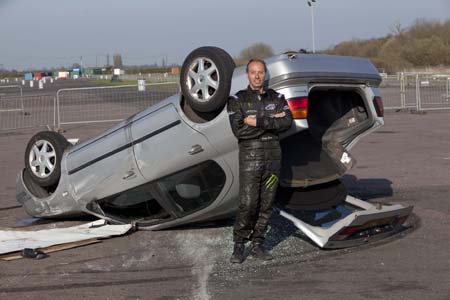 Then it’s the instructors’ turn to take over. I sit by Jason in the BMW as he slams the car around the customised racetrack which is littered with obstacles, which we drift around, smoke pouring from the vehicle.

Terry ‘chases’ us with another passenger in a second BMW, getting within inches of our car. It’s a few minutes of high-adrenaline, rubber-burning fun.

There’s only one more stunt left to do at the end of our Ridge Racer Unbounded crash course – and it’s taken from the game.

When playing, gamers are able to drive through things that get in their way – so Terry Grant does the same, smashing through a small caravan.﻿

Bits of wood fly through the air as he ploughs through it, ending up in a roll, and walking away as though he’s just parked at Sainsbury’s.

He makes it look simple – as he does with every stunt I’ve seen today. But there’s no need to show off now, is there?

Is Kate Middleton the new Diana?