Earth Hour 2011 will plunge England into darkness from 8:30pm until 9:30pm tomorrow (March 26) as part of the global initiative which sees landmark buildings around the world turning off their power.

Iconic landmarks like Paris’s Eiffel Tower, New York’s Empire State Building, the Golden Gate Bridge in San Francisco, the Colosseum in Rome and the Christ the Redeemer statue in Brazil will turn their lights off in the name of the environment.

131 countries are participating in Earth Hour 2011. Organisers hope that hundreds of millions of people switch their off power to raise awareness of climate change. 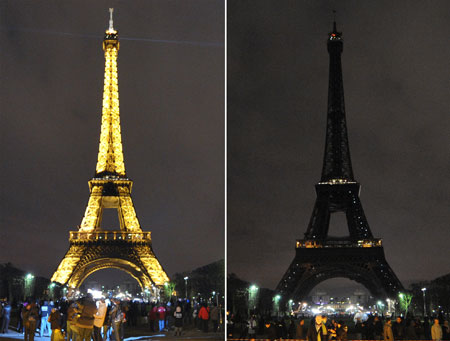 The Eiffel Tower in Paris for Earth Hour 2010.

Earth Hour was trending on Twitter this morning as Twitterati around the globe showed their support for turning off the lights tomorrow.

The Worldwide Fund for Nature has created an Earth Hour Twitter application that will “turn off the lights” on your Twitter profile during earth Hour. Get it here.

What is Earth Hour?

Earth Hour began in Sydney, Australia, in 2007 when lights were witched off in 2.2 million homes and more than 2,000 businesses.

Since then, Earth Hour has gone global, with more than 50 million people participating.

“It is only through the collective action of business, organisations, individuals, communities and governments that we will be able to affect change on the scale required to address the environmental challenges we face,” Andy Ridley, Co-Founder and Executive Director of Earth Hour said.

In further-reaching Earth Hour initiatives, Sydney has committed to switching its streetlamps to energy saving LED, in Shenyang, China 38,000 hectares of land will be reforested and Credit Suisse AG has promised to continue its carbon neutral status.

Australian prime minister Julia Gillard has spoken out in support of Earth Hour, saying: “I believe 2011 is the year Australia will choose action. Everyone taking part in Earth Hour this year is helping make sure this is so.” 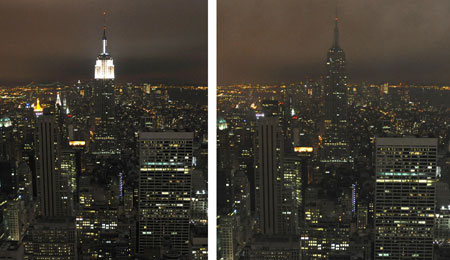