A million-strong protest in Egypt gathered this morning to for the “march of a million” demanding that President Hosni Mubarak stand down after his 30-year rule. Protestors are arriving in Cairo’s Tahrir Square with the assurance from the military that force will not be used.

Several thousands camped in the central Cairo last night to be ready for today’s march. Demonstrators held aloft signs reading: “One million march. 10am. Down with Mubarak”.

The Egyptian army said it would not use force against protesters. In a statement it that “freedom of expression” was guaranteed to all citizens demonstrating using peaceful means.

“The armed forces will not resort to use of force against our great people. Your armed forces, who are aware of the legitimacy of your demands and are keen to assume their responsibility in protecting the nation and the citizens, affirm that freedom of expression through peaceful means is guaranteed to everybody,” the statement said.

However the army warned people not commit acts of sabotage that violated security or destroyed property, saying it would not allow anyone to loot property or “terrorise citizens”. 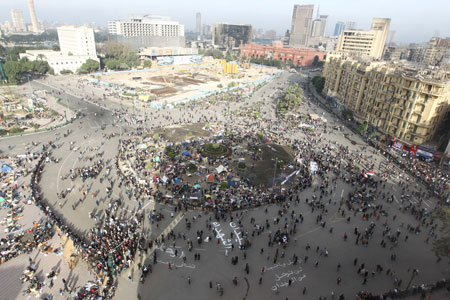 Troops have shown a high level of tolerance towards the protestors and some army vehicles are now sporting anti-Mubarak slogans.

Today’s “march of a million” is expected to make stops at the state television building and the presidential palace. It will be the biggest march since Egypt’s unrest began eight days ago.

Roads and public transportation to Cairo have been shut down ahead of today’s march, reported the Associated Press reported. Train services nationwide have been suspended for a second day and all bus services between cities were halted.

According to the BBC, Egyptian authorities have been confiscating some broadcasting equipment from journalists.

Food review: The Adam and Eve