The Electric Daisy flagship sits in Las Vegas (formerly California), in one form or another, since the early 90’s and is one of the largest of its kind globally. Spin offs include Puerto Rico, Mexico, Japan and the UK.

Put together by Insomniac Events (of Wonderland fame), a production company founded by Pasquale Robella. He focuses on fans experiences rather than profit and ticket sales (oh how lovely everything would be if this was always the case eh). We love him.

From the moment we arrived at the main stage, “the kinetic field,” we knew this was going to be good, and I mean really good.

Towering over an amassing crowd of anticipating ravers stood an astonishing stage that just by its sheer proportions was breath-taking. Bathed in an astounding display of strobe lights and cutting edge pyrotechnics with a massive screen in the centre it loomed, an azure waterfall at one end cascading down beautifully whilst two ebony guardians adorned in gold stood either side silently, at the other end a huge blood red padlocked door with a gigantic dragon wrapped ominously around it however the centre piece just blew you away. Gazing down over the 75 acres that was the main arena perched an enormous blinking green owl, his eyes moved over the scene of stomping revellers almost knowingly (yes I know that’s not possible but I’m painting a picture, yeah?). 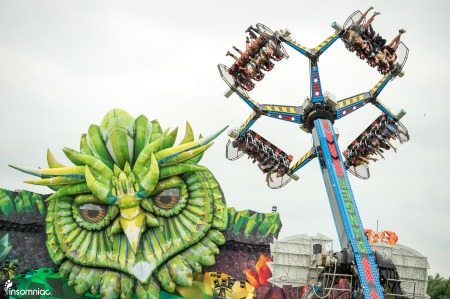 As the carnival burst into life with the boundary pushing beats from Alison Wonderland, a pop/electronica mix bringing the crowd excitedly to its feet, it became evident that this was something really special. It continued without a glitch straight into Aviciis spine tingling set of earthy tones and banging house which brought the people alive and so on, the entire day went without a hitch, one set after another without pause from the likes of Axwell, Dimitri Vegas, Don Diablo, Eric Prydz whipping the gig into a crescendo of energy. Despite the less than summery feel brought to us by the great British weather, the fantastic atmosphere increased with vigour as the day progressed into an aura of euphoria that washed over everyone as both Martin Garrix and Martin Solvieg had the throng up off its feet, hands thumping the air, dancing gleefully.

The centre stage however wasn’t all that was happening, three other areas were also offering up some banging tunes to the delight of the crowd.

“Cosmic meadow”, hosted by dreamstate, a fabulous mix of cornerstone names such as Slenderwick and Paul Van Dyke, a treat if you fancied something a little less mainstream than the folk dancing away seemed to be loving.

“The Neon Garden” amongst others here, Lost Frequencies, Philip George, was not to be over looked.

The entire event was everything it promised to be, spectacular in every way and as the sun set over the array of white knuckle rides and ecstatic faces lit up with excitement, love and state of the art lighting, it felt like everyone belonged as sounds from the headliners throbbed from various stages. Everyone was dancing, smiling and happy to be alive.  A perfect day drew to a close, all made possible by the evident calibre of those who put EDC together. 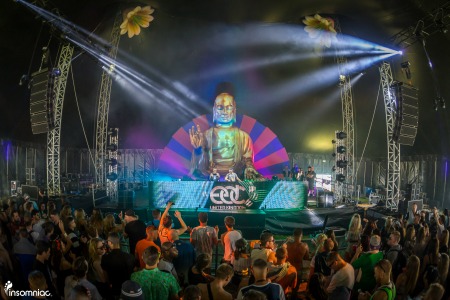 And it would have been lovely to just leave it right there, sadly I don’t believe it would be a true depiction if I did. After walking back to the car and talking excitedly about what an all-round astoundingly fabulous day it had been, the shine was somewhat rubbed off when we attempted to leave the event. Who knows what was going through the minds of the car park security, their managers or whoever instructed one of their team to park a transit van blocking the only exit of the staff car park so no-one (including the on-site security team who had other jobs to go to/various other people with other commitments elsewhere and a very distressed teary individual) could leave the car park for a couple of hours.

The police arrived, but the van didn’t budge as the driver sat whilst police and patrons implored him to move. Now I can appreciate the rock and hard place he was between, but after nearly an hour of being told the security manager would either arrive or call, nothing changed as an increasingly disgruntled crowd gathered and tempers started to fray. After an hour we were allowed to leave after being told the plan was to trap us there until everyone had left the area to avoid congestion. As we left, an hour and a half before they had planned, the roads were empty. A bit of a black mark on an otherwise perfect day. EDC – whoop whoop, car park security manager- boo hiss. Hopefully this will be addressed for next year as this is most definitely an event not to be missed. 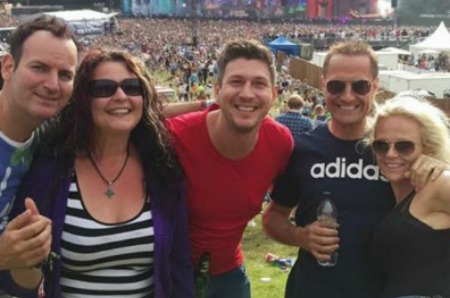