Benedict Cumberbatch is nothing short of a superstar – albeit a reluctant one. At 37, he has a prolific career, but is best known for his modern portrayal of Sherlock on the BBC. His appearance at Oz Comic-Con Adelaide was a clear indication of his growing popularity in Australia, with crowds lining up for hours for photos and autographs on both days.

Aside from being the owner of the famed ‘cumberbooty’ coveted by thousands of fans worldwide, he is intelligent, talented and surprisingly humble. Panels at Oz Comic-Con Adelaide revealed he is also an advocateof prisoner education through the provision of books, and perhaps even more admirably, he freely discussed the importance of talking about mental health – despite the chance of negative publicity. When asked by me in his first panel where he would go and what he would do if he had a day off in any city in the world, he initially stated the Barossa Valley (a wine region in South Australia), eliciting cheers from the crowd.

He then said he preferred to “head for the hills”, getting back to nature and enjoying some privacy, which I’d imagine is rare these days for someone so recognisable. 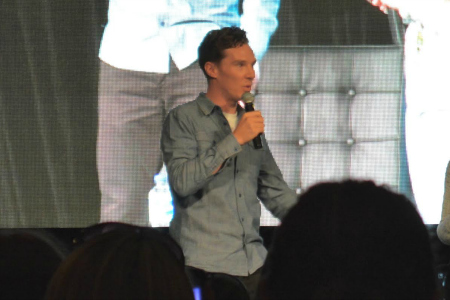 As one of 50 lucky meet and greet participants on Saturday night, I was already delirious, having packed and flown in early that morning. Needless to say I was gobsmacked when Benedict bounded in with a Tigger-like exuberance that seemed superhuman in the circumstances. This was amplified when he commented (as he sat down) that WE must have all had a long day.

He listened earnestly to questions and gave thoughtful, eloquent answers, keeping everyone smiling with his sparkling conversation, peppered with the odd delightfully-accented swear word. In the quick 10 minutes he was at my table he answered two questions, discussing the motivations behind his character Alan Turing in The Imitation Game, and my own question about the intricacies of voice acting in Cabin Pressure.

The next morning, I was utterly exhausted. Benedict, despite having posed for myriad photographs, signed countless autographs and attending the meet and greet the day before, rendered me awestruck after my photo with him when he said (with bright eyes and a cheery smile) that it was lovely to see ME again. Embarrassingly, my normally eloquent self was reduced to three mumbled words: “Oh, um… likewise,” after staring at him doe-eyed for just a touch too long.

By Sunday evening, I was sporting bruises after being part of the scrum to watch Benedict’s second panel. Fans lined up for hours outside Stage 1, and organisers struggled to control the horde of Cumber-fans, reversing the direction of the line that had formed, causing a sweaty stampede as fans who had secured spots at the front were suddenly relegated to the back.

Without room to accommodate demand, the panel was simulcast in the adjoining Stage 2, to the disappointment of those not quick enough to secure a spot in Stage 1 (myself included). However, Benedict’s witty answers, adorable facial expressions (including his beloved ‘nose crinkle’) certainly soothed. An impromptu walk through Stage 2 at the end of the panel made for plenty of high-pitched squealing, frantic photo-taking and tears as he left, leaving a throng of hyperventilating fans in his wake.

I can honestly say that Benedict was one of the loveliest, most sincere, talkative and gracious celebrities I have ever had the pleasure of meeting. I certainly hope I will again.

Anger after Roald Dahl family ask for money to save shed