The race is a monument to supreme athletic endurance, illustrated by some of Europe’s most majestic scenery, but it is an event dogged by scepticism. For the Tour’s first 60 years, doping was part of the race’s very fabric. Riders imbibed everything under the sun to gain an edge – alcohol, ether, toad extract, amphetamines, cocaine, nitroglycerine, even strychnine. It was only after a series of incidents in the 1950s, when drugged riders injured themselves, that doping became illegal and drug-testing began.

In 1966, a third of riders tested positive for amphetamines. In 1967, British rider Tommy Simpson died in his saddle, after a combination of drugs and alcohol masked the effects of exhaustion. Steroids eventually became the drug of choice, but they were too easily detected. By the 1990s, it was all about erythropoietin (EPO), a drug ostensibly synthesised to boost red-cell production in anaemics. Since then, the Tour has been beset with one doping scandal after another and spectators can be forgiven for questioning how many of the top riders are clean and how many are drug cheats.

Alberto Contador had won the Tour De France three times, most recently in 2010, and was considered one of the world’s best climbers. There were suspicions surrounding the Spaniard for several years, though – in 2009, after Contador smashed a climbing stage up the Swiss peak of Verbier, former Tour winner Greg LeMond wrote that Contador’s performance would require an aerobic capacity “that has never been achieved by any athlete in any sport”.

Contador refuted the allegations, but when he was eventually busted, few were surprised. In 2010, he tested positive for clenbuterol, a steroid used to treat asthma, and plastic residue, which suggested he had used blood transfusions to beat testers. Contador copped a one-year ban but, on appeal, claimed contaminated food was responsible. The Spanish Cycling Federation cleared him and Contador’s case was referred to the Court of Arbitration for Sport, which last year reiterated the ban, although it meant Contador was able to defend his title last year.

How dodgy is it? The 2006 Tour de France was rocked by the Operacion Puerto case, a Spanish investigation into the doping network of Dr Eufemiano Fuentes. Contador and his Astana teammates were all implicated. At the time, Contador insisted: “I was in the wrong team at the wrong time and somehow my name got among the documents.” 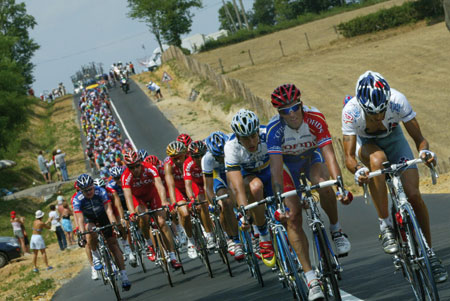 American cyclist Floyd Landis won the 2006 Tour de France, only to be stripped of his title after returning a urine sample showing a hormone imbalance nearly triple the legal ratio. It was a landmark in professional cycling – the sport’s most prestigious race sullied as the ugly reality of doping was dragged out from the shadows.

Landis protested his innocence and even released a book, Positively False, and created a website to raise funds to clear his name. But in 2007, he was found guilty and banned for two years. When Landis eventually admitted to doping in 2010, no one was shocked, although many were disgusted by his willingness to ask other people to donate funds to his fraudulent defence. And Landis went a step further, naming others he claimed had also doped, including seven-time Tour winner – and Landis’s former teammate – Lance Armstrong.

How dodgy is it? Landis claimed members of US Postal used EPO and resorted to blood transfusions to avoid getting caught. Landis charged that ‘clean’ blood was extracted in Armstrong’s apartment and kept in a fridge in his wardrobe. Landis also claimed that a positive drug test returned by Armstrong had been suppressed after team officials paid off cycling bosses. 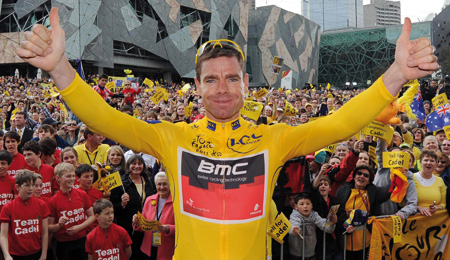 In 1996, Armstrong, then 25, was diagnosed with testicular cancer. Even though the tumour metastasized into his brain and lungs, Armstrong recovered and came back to win the Tour de France seven years in a row between 1999 and 2005. But, in 2010, Tyler Hamilton – an Olympic gold medalist and another of Armstrong’s former teammates, broke his silence. Appearing before a federal grand jury investigating doping in cycling, Hamilton admitted using performance-enhancing drugs and even returned the Olympic gold medal he won in 2004. Speaking to 60 Minutes, Hamilton claimed to have seen Armstrong inject EPO “many, many times” and that he had also used testosterone and undergone blood transfusions to avoid detection, describing it as “the culture of the sport”.

How dodgy is it? Armstrong, now the subject of a fresh probe by US officials, is quick to claim he has never failed a drug test despite being “the most tested athlete in the world”. In the past, Armstrong has insisted: “This has been a 13-year question… Blood, urine, hair, whatever they wanted to take. At some point, somebody’s going to have to answer that question. I’m not wasting any more of my time.”

But how many former teammates need to implicate Armstrong before the mud sticks?

And they’re off … know your jerseys

The Tour de France is held across 21 stages spanning nearly 3500km. The main event is known as the General Classification – the eventual winner is determined by the time elapsed in completing the various stages. During the tour, the leader of the General Classification wears the yellow jersey. But there’s also a Points Classification, where the first 25 riders who finish each stage earn points. The leader of the Points Classification wears the green jersey. Then there’s the King of the Mountains, which recognises the cyclists who excel in the climbing stages, where riders require a unique fitness base to battle the steepest hills. The leader in these stages wears a white- and-red polka-dot jersey. It’s all very colourful, isn’t it?

Discover the Natural Beauty of Japan