England’s Ashes win has sent the Barmy Army into a frenzy, with the die-hard supporters on a mission to “paint Sydney red and white”.

It was a glum finish for Australia and few Aussie fans turned up to witness the team’s final humiliation at the SCG which saw England win the Ashes series 3-1.

England’s hardcore of fans however were out in full force, making the most of free entry to the ground for the final day of the Ashes. Many coming straight from all-night boozing sessions, the Barmy Army filled the Victor Trumper Stand to trumpet and sing their way to glory.

“Are you Bangladesh in disguise?” the England fans chanted to the defeated Aussies as Barmy trumpeter played an ironic Last Lament.

It’s a victory for which the England fans have waited patiently throughout England’s seemingly-eternal losing streak.

Victor Flowers, 59, told ninemsn: “The Barmy Army has been there and watched England suffer for years.

“This victory is just what we deserve. We are going to make the very most of it.” 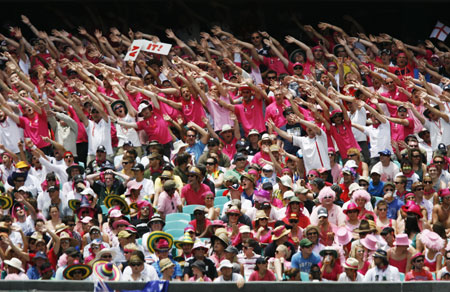 Paul Burnham, co-founder of the Barmy Army, told the AFP that the fans were set for two days of Ashes partying.

“This is what it’s all about: the battle on the pitch and the battle in the stands. It’s a good battle between the England and Aussie fans, and then we all go for a beer together,” Burnham said.

There are reports of some England cricket fans spending their life saving to follow the Ashes series.

“For so many of us this has been a dream. To see it end so well for us makes it all worthwhile,” was one fans’ summary.