“Not another church/mosque/temple!” With the greatest respect to those of all faiths, sometimes ‘seen one you’ve seen them all’ is fair when it comes to places of worship. But in Istanbul you don’t see these sights ‘cos you have to. You have to see them.

With a history spanning more than 2000 years – it began in 660BC – Turkey’s biggest city, straddling Asia and Europe, has been the capital of four empires (Roman, Byzantine, Latin and Ottoman).

It’s no wonder this place is so bloody interesting, and its evolution, beauty, scale and fascinating contradictions are all clear in the most elaborate landmarks. Here’s TNT’s pick of the best. 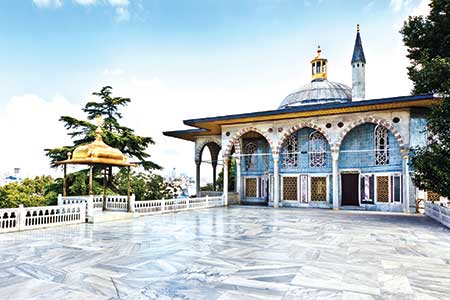 Palace, museum, gardens (tulips everywhere!), touched by each Ottoman ruler who called it home over about 400 years – this ticks every box for a ‘sight’.

Among the many treasures here are some of the world’s most significant Muslim relics, including Muhammed’s cloak and sword (he must have been huge), and the journey through centuries of weapons, from bludgeoning devices to elaborate swords and guns, is awe-striking.

The most popular area, though, is the haram. For a place built for discretion (the outside is intentionally plain) it’s strange that people now pay extra to see inside. Not so much a seedy sex dungeon, it was more a family quarters for the privy wives, their underlings and kids. Stunning tiled rooms surround gorgeous shallow baths. 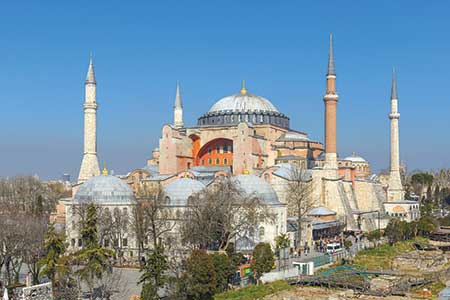 Epic: Ayasofy’s more than a mosque

I’ll admit to being a “not another steeple” type, but Ayasofya or Hagia Sophia (Greek) is one exception.

The church-then-mosque-then-museum is a masterpiece, maybe most interesting for its mish-mash of Christian (it was HQ for the Eastern Orthodox Church for 1000 years) and Muslim (Ottoman Sultan Mehmed II renovated in 1453) art and architecture – an English-speaking guide to point out the differences comes in handy, but I’d have been happy marvelling at the extreme scale, Christian mosaics and Islamic features.

When my guide dubiously tells me “10 hundred thousand” (would that be a million?) people built it, I’m happy to believe. For luck, spin your hand 360 degrees in the wishing column. 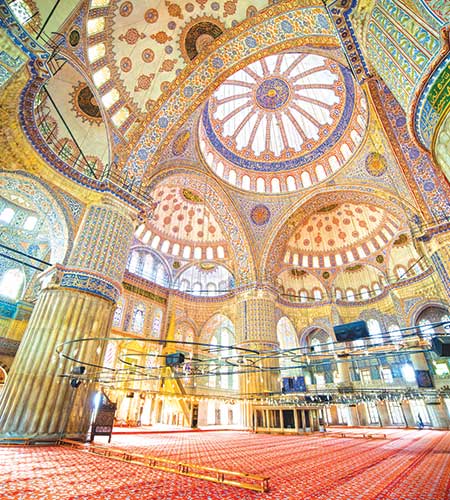 Elaborate: ignore the foot smell and look up at the Blue Mosque

Yep, another mosque and must-see, across from Ayasofya – but know you’ll spend more time in the line than inside. Built in the early 17th century, it still operates during the five daily prayers (it’s closed to visitors during that time). I take good advice from a local guide and get there while it’s closed.

As I wait at the front of the queue outside, a Turkish guide complains to her group: “There are so many mosques in Istanbul, this should be a museum. It is too popular.” A lady from Malaysia (a Muslim country) says they’re happy to wait and respect the worshippers. Schooled!

When inside, it’s worth the wait – ignoring the distinct smell of feet from those who may not have realised they’d have to take off their shoes today – and striking, with ornately embroidered carpet working off the 21,000 fine Iznik tiles, many of them the blue, giving the mosque its name. 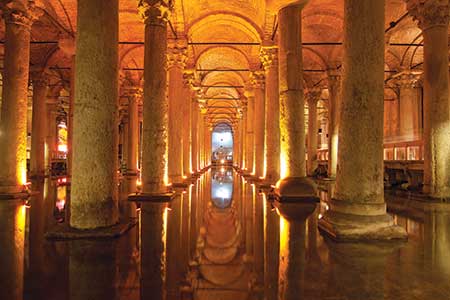 The dull brick entry’s a trick for what lays beneath, a 138m by 65m chamber with 336 columns that’s formed various water supply functions since the sixth century. A romantic scene with mood lighting and amazing acoustics, it hosts concerts too. 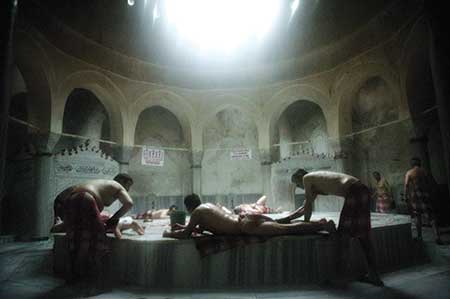 In the middle of all the remarkable monuments is this 1556-built hamam, a mountain of marble and indulgence where for 80 Lira (£30), you can get relaxed the hell out of by a burly but friendly front rower. In my case, his name’s Omar.

After tipping water from a sink over myself with a gold-plated bowl, Omar invites me into the main room without a word. In a process that hasn’t changed for centuries, I’m sat down and he takes control of the bowl, then I’m onto the marble floor so hot that as quick as water is run over it, it evaporates.

Omar massages my back, then front – whatever’s not covered by my flimsy cloth. No reaction appears to be the symbol for, “Harder, please,” so I respond to the beating, and his extra effort to break my arms off, with a grunt.

He then politely asks, in perfect English: “Is this your first visit to a hamam?” I answer yes, but know it might be my last. As for Istanbul, though, the next trip was being planned on the way to the airport.

Getting there Fly London Stansted to Istanbul Sabiha Gökçen direct with Pegasus from £281 return. 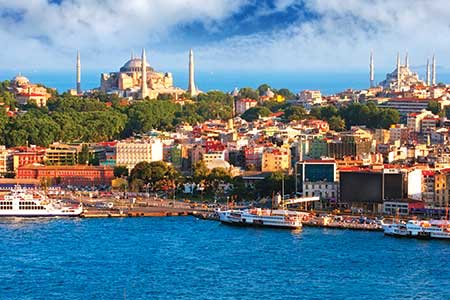 Budget: In the home of kebabs, kokorec’s the drinking food. Avoid dodgy vendors and go to Sampiyon Kokoreç. The signature dish is lamb intestines with a paprika-based spicy sauce on Turkish bread (above). Sounds horrific, but is delicious. Or go for the stuffed mussels. If starving, you and a mate will be stuffed, too, for under £10.

Midrange: Beware imitations of Istanbul icon, Sultanahmet Köftesi, across from Ayasofya, which sells almost exclusively izgara kofte (beef meatballs), with a spicy red paste (left), and piyaz (a salad of white beans, lettuce and tomato) for about £10. There are others with the same name, but this is the original.

Luxury: For a treat it has to be seafood on the Bosphorus. Neptün Restaurant gives a choice of fresh fish from sea bass to red mullet and is under Galata Bridge with a view of the river. A few courses and wine goes just over £30. For the same view, grab a balik ekmek (mackerel in a roll) from one of the many BBQs on the water for £1.80. 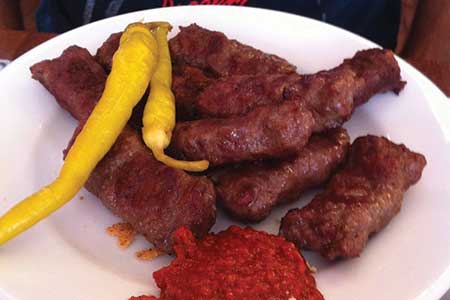 Budget: If you want to charge on early in the night hub of Taksim, you could do worse than Asmali Shot House. They do deals here – one shot is 5L (£1.80), but 10 is 50L (£18), etc. Or just grab beer. A terrific young singer-guitarist was playing Turkish (and some western) popular songs when we visited. It ramps up late.(Asmali Mescit)

Midrange: In Istanbul, find a rooftop, sit and drink in the view. It’s even better with a cocktail in hand. 5.Kat (above) is one of the trendier roof bars in town – on the fifth floor in a side street – and takes in a cracking 180-degree view over the Bosphorus. A glass of wine isn’t prohibitive at £5.50 but the food gets pricey.

Luxury: Reina by the Bosphorus has several bars and restaurants, and among the 2500 people who pack in are local celebs, models and millionaires. The restaurants range in price and cuisine – the theme is “world under one roof” – but the drinks prices are across the board £10 and up for a glass of wine. 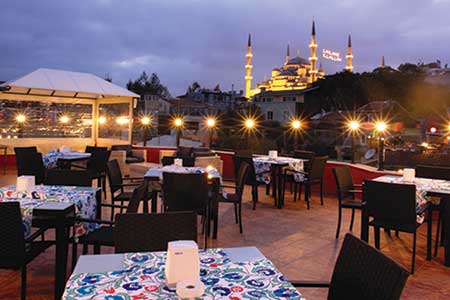 Budget: Near all the major attractions in the Old City – Blue Mosque, Ayasofya – Istanbul Hostel in Sultanahmet is close to bus, train, ferry and tram links and 30 mins to Taksim. They pride themselves on safety and the helpfulness of their staff, who can arrange trips and tours four you. Cheap from £12pn for a dorm room.

Midrange: If you have a short time and want to see the major sites, somewhere like Amiral Palace Hotel (above) in Sultanahmet is ideal. A five-minute walk from Ayasofya it has elegant furnishings and a restaurant offering regional cuisine, so eating in the hotel isn’t a total faux pas. Doubles from £75pn.

Luxury: Akgün Istanbul is the sort of joint a visiting politician would feel at home in, with everything he needs: bars, a hamam, pool and touches of understated opulence all over, with marble and timber finishings, and the rooms are huge. Good value for a five-star hotel – costs from £148pn for one of the slick suites.

A good year for Wilkinson