The United States and Europe are locked in a tense battle for the 38th Ryder Cup today as the biennial golfing showpiece moves towards its climax.

The United States, trailing by three points overnight, struck back early on with wins from Steve Stricker and Dustin Johnson to cut Europe’s lead to one point before Ian Poulter hit back for Europe.

With eight more matches to be completed, Europe led 11-9, still needing three-and-a-half points to regain the trophy lost in 2008.

Europe led in four of the remaining matches, the United States in three with one all square.

Europe had been put in pole position on Sunday after taking a three-point lead in the third session, winning 5 1/2 of the six points up for grabs. The rout turned an overall two-point deficit into a huge advantage for Europe.

Europe captain Colin Montgomerie described Sunday’s performance as “one of the greatest days” in the team’s history – but said there was no chance of his players resting on their laurels.

“All credit to everybody in that team today. All 12 on that course performed brilliantly,” Montgomerie said.

“In my time I truly believe that that was one of the greatest days for European golf that we have had.”

United States captain Corey Pavin insisted the Americans would bounce back after a calamitous day for the defending champions.

“We’ve got 12 of the best players in the world and in match play anything can happen,” Pavin said.

“The one thing I can guarantee to you is that Team USA is going to come out firing tomorrow. They have to go out and perform and play and if they do that we have a chance.”

Severe weather disruptions earlier in the event had forced play into a fourth day for the first time in the tournament’s 83-year history.

However, the chance of rain didn’t stop this fan from showing his appreciation. 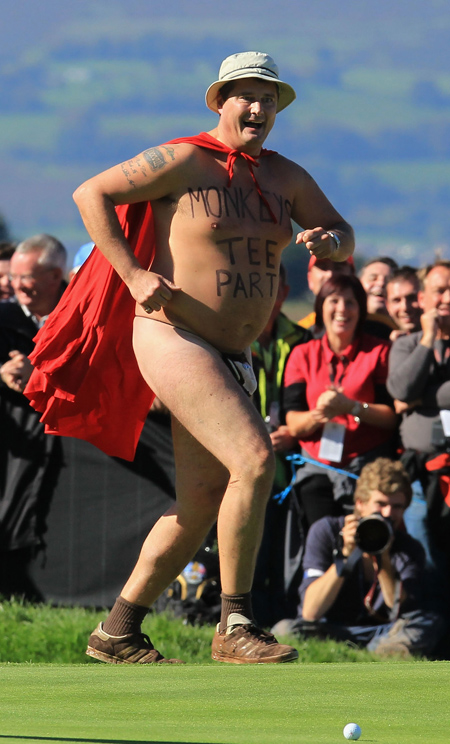 How Many Times Would the Biggest Footballers Need to be Sold to Pay Off Their Country’s National Debt?

Brits return from holidays with the horn