Where: Tallinn, Estonia
Why: Said to be the site of the world’s first Christmas tree, where better to get festive than in Estonia’s medieval capital? It’s widely believed that the first recorded public display of a festive fir was in 1441 in Tallinn’s town square. Hopefully ye olde tradition of dancing around the tree and then burning it down hasn’t stuck.
Bah Humbug: Feeling a bit Scrooge? There’s still plenty to enjoy in Tallinn, a romantic fairytale-like spot dotted with ancient, cobbled lanes.
See: tourism.tallinn.ee/eng

Where: Nuremberg, Germany
Why: The Germans know how to do Christmas. From an embarrassment of snow-laden fir trees to the ubiquitous gluhwein, Deutschland has got Yuletide down. So it’s no surprise Nuremberg’s 400-year-old Christkindlmarkt is one of Europe’s most popular. The Old Town’s main square lit up at night by fairy lights is nothing short of magical.
Bah Humbug: Feel as warm and fuzzy as the Christmas fans by checking out Nuremberg’s legendary nightlife and giving yourself a crash course in dark Bavarian beer.
See: christkindlesmarkt.de/English

Where: Prague, Czech Republic
Why: Check out the Czechs’ offbeat traditional Christmas food – fish soup (presumably the reason for the huge tubs of carp lining the streets at this time of year), Christmas cookies and honey liquor. Bonus points are added for locating the markets in Wenceslas Square – as in that King Wenceslas.
Bah Humbug: Famous beers, regular organised pub crawls, gorgeous old-world architecture and scenic river cruises should cheer you up.
See: czechtourism.com 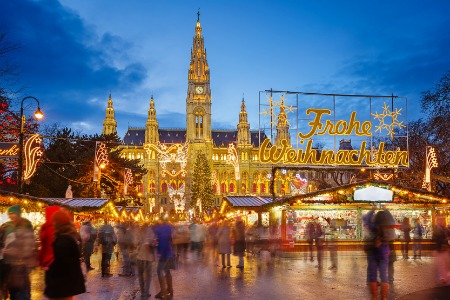 BEST FOR… LOTS OF CHOICE

Where: Vienna, Austria
Why: Home to a series of spectacular Christmas markets, a must-do when in Vienna is to check out the Advent windows outside the City Hall – festive scenes painted by local artists. Be sure to see a few markets around town – there are more classy wares at Schönbrunn Palace market, and handmade goods at Altwiener Christkindlmarkt.
Bah Humbug: Escape the Christmassy crowds and check out Vienna’s challenging contemporary art scene.
See: wien.info/en

Where: Copenhagen, Denmark
Why: Copenhagen’s Christmas market serves up roller coasters and hordes of Danish Christmas pixies. Set in the city’s amusement park, Tivoli Gardens, even Scrooges would be hard pushed not to ‘aaah’ at the vast Christmas grotto set before them, all twinkling lights and frosted trees. Danish mulled wine (the wonderfully monikered glögg) and hot apple dumplings are not to be missed.
Bah Humbug: If even the promise of roller coasters can’t make you enjoy the market, hop on a free bike (or Bycykler) and see Copenhagen’s sights on two wheels.
See: tivoligardens.com

Where: Budapest, Hungary
Why: Budapest’s celebrations can claim a distinctly Hungarian identity. The nation’s traditional music and folk dancing abound, and there are puppet theatres at the market in Vörösmarty square.
Bah Humbug: Sail up and down the Danube for a view from the water of Budapest’s baroque, neoclassical and art nouveau architecture, and sweat out your Scroogey sentiments in a Turkish-era thermal bath.
See: gotohungary.co.uk 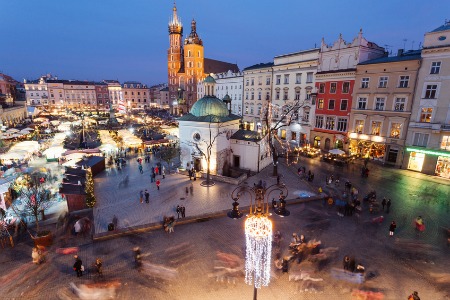 Where: Krakow, Poland
Why: Set in the massive Rynek Glowny central square, amid the historic Old Town, centuries-old Polish carols ring out around wooden stalls selling hand-painted cut glass decorations. Open-air eateries provide hearty traditional fare such as pierogi (dumplings) and golonka (stewed pork knuckle) – washed down with mulled wine, it’s sure to keep out the cold.
Bah Humbug: There’s not a great deal of holiday cheer in facing Krakow’s tragic recent past, though the miracle of its surviving historic buildings and monuments in spite of the Second World War should raise a grateful smile. Make time to visit the former Jewish quarter of Kazimierz, just outside the Old Town.
See: Krakow.pl/english

BEST FOR… AN UNSEASONAL SETTING

Where: Barcelona, Spain
Why: Sunny Spain might not seem an obvious choice for walking in a winter wonderland and chestnuts roasting on an open fire, but Barcelona’s Christmas market has been going strong since 1786. Parades, handcrafted Catalan decorations and a nativity scene contest are just a few attractions. The biggest and most traditional Christmas market in Barcelona is the ‘Fira de Santa Llúcia’ on the Avenida de la Catedral.
Bah Humbug: Where to start? Partaking of sangria, paella, Picasso and flamenco will be suitably unseasonal.
See: barcelona-tourist-guide.com/en

Where: Dublin, Ireland
Why: The Dublin Docklands Christmas market is an immensely popular affair that brings the best of German traditions – bratwurst, gluwhein, etc – to your doorstep. A mock snow-covered village, gallons of egg nog and German-themed bars all feature.
Bah Humbug: A visit to the Guinness Storehouse (Guinness-storehouse.com) will make up for all those sleigh bells ringing. Stare up at the world’s biggest pint glass, learn how to pull the perfect pint, then sip down the black stuff in the Storehouse’s Gravity Bar, which affords a 360? view of Dublin.
See: visitdublin.com

Where: Berlin, Germany
Why: The capital city of the birthplace of today’s model for a Christmas market is guaranteed to put on a spectacular show. Big wheels, ice-skating, jugglers and fire-breathers create a carnival atmosphere, and Berlin’s edgy rep as an arts hub is reflected in the sale of jewellery, paintings and sculptures by the city’s cutting-edge designers and artists.
Bah Humbug: If you think elves and big white beards are to be sniffed at, luckily you’re in the European capital of cultural cool. Check out Berlin’s incomparable fashion, art, design and music scenes – you’re in hipster heaven.
See: visitberlin.de/en