This is the best way to get around Barcelona: with a twist of the throttle I race past the open-top tourist bus and palm trees flash by. Rather than some boring pre-recorded commentary, the only sound in my ears is the wind.

Scooter tours are the latest way to check out Catalonia’s self-consciously cool capital and sightseeing will never be the same again.

Gingerly testing my 125cc twist ‘n’ go at Cooltra’s Barcelonetta base, I imagine rear-ending Catalan white van man on the mean streets of this ever-popular city. But, with a joint brake lever, head-over-handlebars acrobatics are ruled out and there’s no sign of Mediterranean road rage as I follow guide Roger’s scooter to the first destination.

At Port Olimpic, Roger points out Frank Geary’s golden fish; symbolic of the 1992 Olympic renovations that launched a revitalised Barcelona on to the tourist stage. The city made famous by George Orwell’s “Homage to Catalonia” used to be known for industry not aesthetics: “It was all abandoned warehouses and factories here; the whole area has been completely transformed.” It turns out even Barcelonetta beach is artificial. 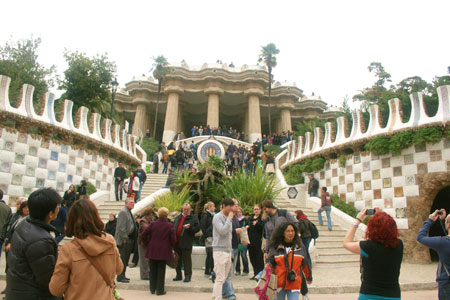 Barca’s quite spread out, and we shoot northwards over multiple intersections before arriving at Sagrada Familia. If builders do finish local legend Antoni Gaudi’s basilica in 2026, residents are in for a shock. Roger shows us a model: the final extensions to this most iconic of churches should replace the shop we’re standing in – and all the apartments above it. Leading us to the best photo spot, he relates the sad tale of Gaudi’s death – killed in 1926 by a tram, stepping backwards to assess the labour of love he started way back in 1883.

But rocking up at Parc Güell, we find out that not all of Gaudi’s schemes took off. “This was going to be a self-contained aristocratic gated-community, but it was too far from town,” says Roger.

We listen to a busker playing traditional Spanish guitar at the MNAC, a huge palace that is now the national art museum, then wind our way up the steep hill to Montjuic castle. Surveying the sprawl below, we’ve obviously covered a lot of ground in 2.5 hours. Roger knows a bar where a bottle of Catalan cava costs less than a pint in London, if we fancy it? The official tour is finished, but the evening has only just begun. 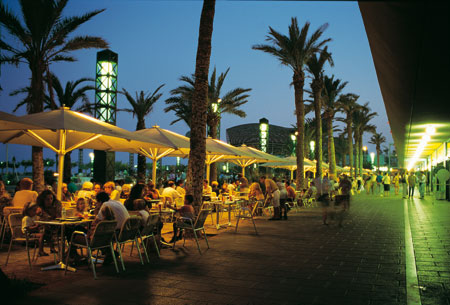 In winter, visitor numbers drop and locals reclaim some of the atmospheric squares and countless bars that hide down narrow alleyways. But expats still pack the Irish pubs and Schilling on C. de Ferran, tourists queue to get into the ridiculously reasonable Les Quinze Nits restaurant in Placa Reial and good mojitos are a staple of Sugar and Sub Rosa in nearby C. de Rauric.

The wail of flamenco always leaks on to La Rambla from no. 35, Flamenco Cordobes (tablaocordobes.com) but this is a great time to go a little off-piste to bars like Pastis (C. de Santa Monica) where natives and foreigners alike enjoy traditional live music over a caña of Moritz.

The arty crowd parties all night in El Born, whilst the seedy-chic of Raval warms up late. Perennial nightowls finish it all off in a cafe, with the traditional post-club hot chocolate and churros.

WHEN TO GO: Visit in winter to escape the crowds or go in summer for sunshine.
GETTING THERE: Barcelona is well-served by budget airlines. Airport buses run every 10 minutes to the top of La Rambla for €5.05.
GETTING AROUND: Two to five-day transport passes can be bought (tmb.cat) or 10-ride tickets (T-10) are €7.95.
VISAS: South Africans need a Schengen visa.
CURRENCY: Euro. 1 GBP = 1.20 EUR.
LANGUAGE: Catalan and Spanish, though English is widely spoken.
GOING OUT: A pint is €4-6.
ACCOMMODATION: Budget hotels from €50 for a double, bed in a hostel dorm from €13.
GET MORE INFO: Cooltra tours (cooltra.com) start from 30p/p all inc. Customers need an EU or International driving license.

The Cherry Orchard, Olivier at the National Theatre – theatre review