Shunning guidebooks and travel websites, my goal for the day is to enjoy Bristol’s highlights with only Twitter as my chaperone. Is it possible to learn about a city’s hidden gems with advice being offered in the form of 140-character tweets? Here’s how Janine Kelso got on…

The tweet: @fi_q: you must visit Clifton Village and harbourside. Park Street for unique shops.

What happened next: Park Street heaves with offbeat cafes, such as the frothy Cupcakes And Confectionary, and vintage fashion shops, such as Motel, where I buy a pair of retro boots, a steal at £30.

It’s raining when I head over to the harbourside, lined with trendy brasseries, pubs and cookery schools. In summer, the Bristol Ferry Boat Company offers cream teas on the river and champagne cruises
at sunset.

The tweet: @leemannion: used to live there, have a half of exhibition in The Coronation Tap, then walk over the bridge.

What happened next: Unfortunately cider house The Coronation Tap, in Sion Place, is closed when I stopped by late afternoon (they open at 5.30pm), but I walk over Isambard Kingdom Brunel’s Clifton Suspension Bridge, the city’s most iconic landmark. There are knockout views down the Avon Gorge that links Bristol with the sea, but I’m a little unnerved by the dramatic drop, especially when I spot a plaque with the Samaritans’ phone number, as it’s known as a suicide spot. According to Bristol legend, in 1885, 22-year-old Sarah Ann Henley survived a suicide attempt thanks to her billowing skirts, which acted like a parachute. 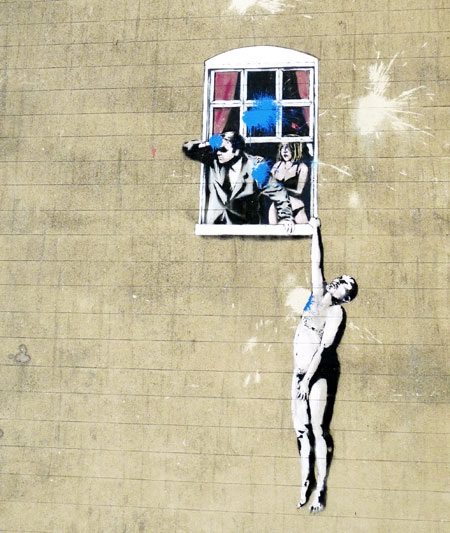 The tweet: @roseypoppins: Can’t go to Bristol without checking out the Banksy’s.

What happened next: Elusive graffiti artist Banksy helped raise the cultural flag for Bristol as his art was born out of the city’s vibrant underground aerosol boom in the late ‘80s. I go to see Banksy’s artwork on the side of a sexual health clinic on Park Street, depicting a naked lover hanging from a window while his mistress’ husband peers out looking for him. In spite of being defaced by paintballers a few years ago, the iconic image is as striking as ever and a must-see for any visit to the city. Other locations to admire Banksy’s work include Stoke’s Croft and on the side of the Thekla Social boat moored in Bristol harbour.

The Tweet: @VisitBristol: It’s British Pie Week! Surely no better excuse than to try a Bristol @pieminister pie if you’ve never had one. Bestest pie in Britain: FACT.

What happened next: Pie Week might have been and gone but a girl’s still got to eat, so I swing by this award-winning, shabby-chic pie shop in St Nicholas Market for a heart-warming lunch. My heavenly asparagus and mushroom pie is served up with mashed potato, mushy peas and gravy. After a satisfying feed, I feel like hugging the tweeter. I mooch about the covered market, discovering an array of characterful independent retailers selling sweets, records, second-hand books and even goodies from South Africa.

What happened next: Since physics pin-up Dr Brian Cox burst on to our screens and made science sexy, everyone has started to marvel at the world around them. Science museum At-Bristol’s £1.5million All About Us exhibition is concerned with how amazing we are.

I like the hands-on nature of the showcase: I look at my veins under a vein ray and hear music through the vibrations of the bones in my jaw by biting down on a straw placed over a metal rod connected to an iPod while putting my fingers in my ears. I ogle real human brain, in all its veiny glory, highlighting the skeleton and central nervous system.

» Janine Kelso travelled to Bristol with First Great Western (firstgreatwestern.com) and she stayed at the Clifton House Hotel (cliftonhousehotel.com)