Facebook Groups – new features to stop you getting fired

It will soon be easier to sort Facebook friends into clusters, meaning you can limit your most explicit/ likely-to-get-you-fired observations and pictures to a safe group of friends. Group members can post information that only other members can see, and they will be able to convene in chat rooms.

The changes should mean that painful Facebook exchanges like the famous one below become a thing of the past. 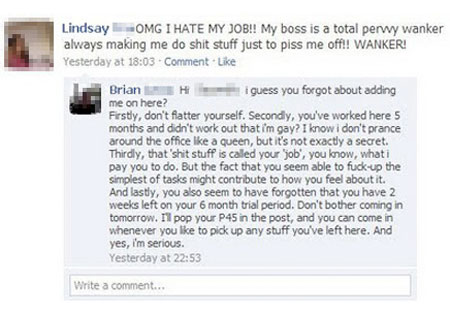 Zuckerberg said: “We think this is going to be a pretty fundamental shift for how people use Facebook … The amount of sharing will go up massively and will be completely additive.

“We’ve long heard that people would find Facebook more useful if it were easier to connect with smaller groups of their friends instead of always sharing with everyone they know. The common concern is always some variant of, ‘I’d share this thing, but I don’t want to bother 250 people. Or my grandmother. Or my boss.'”

Facebook has posted this video explaining how Groups work:

Meanwhile, the ‘I like it on the floor’ Facebook status campaign made the phrase one of the internet’s top searches over the last few days, as people tried to work out why their friends and colleagues were suddenly being so filthy.

You’ll know by now that your reserved work mate’s ‘I like it on the floor, stairs, under the desk…’ update was actually referring to where she likes to keep her handbag, and that it’s all being done in aid of Breast Cancer Awareness Month.

The viral campaign, whose origins are unknown, is similar to last year’s, in which women wrote cryptic Facebook updates referring to the colour of their bra.

The ides with both campaigns was that the meaning of the statuses will be kept secret from men and that the mystery and naughtiness of it all would generate attention for the Breast Cancer Awareness Month.

But has the ruse has been a success in terms of its real goals? A spokesman for Breast Cancer Care, which is not affiliated with the campaign, said: “While viral campaigns have great potential for increasing consciousness around many issues, we’d like to see this go further.

“We’d encourage people to direct their Facebook friends towards helpful support and information to create better breast awareness, for example linking to our website (breastcancercare.org.uk) or reminding their friends to check their breasts regularly when they explain what the campaign is about.”

No time to celebrate for Bulldogs