It was only a matter of time until some bright spark created a Facebook page where people could brag about their sexual conquests, or even name and shame a particularly disappointing encounter.

The Loughborough ‘Rate your shag’ page attracted hundreds of comments from the Leicestershire university’s students, and around 2,500 likes in just two days. However, Facebook has taken the page down, along with other similar pages, after receiving reports and complaints, and bosses at Loughborough University have warned students they could be kicked out for posting on the site, claiming it contravened their policies on acceptable use of IT and harassment. 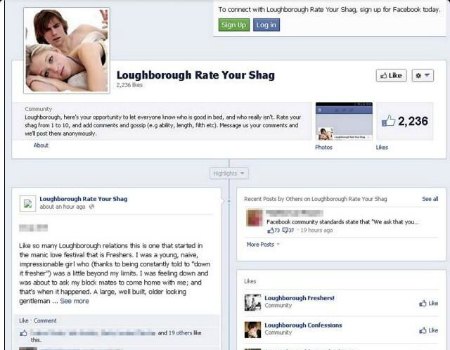 With tales of sordid sex during fresher’s weeks, in the library, at athletic’s clubs and during a geography course – sexy – the page states:  “Loughborough, here’s your opportunity to let everyone know who is good in bed, and who really isn’t. Rate your shag from 1 to 10, and add comments and gossip.” The students would send their stories in a message and the administrator – who is as yet unknown – would post it on their behalf, although links to the personal profile of the person involved would often be posted as part of the status.

‘Loughborough Rate your shag’ also notes, “This page is just for a bit of fun, no offence is intended. If you feel a post is unfair then feel free to let us know and we’ll take action.” This was not enough to appease those who reported the site, however, and the university, which is ranked 12th in the Sunday Times 2013 university league table, is taking disciplinary action, with The National Union of Students stating that the comments were “not funny in the slightest”, and “tantamount to bullying”.

London scene: your weekly what’s on guide to arts and entertainment in the city