Thanks to the Fairtrade movement, it has never been so easy to demolish guilt-free chocolate and get wired on ethical coffee.

You’d have to have been bunking under a big, fat, unethical rock for the Fairtrade movement to have passed you by. Not only is London a Fairtrade city, it is the largest Fairtrade city in the world.

To earn the honour, Londoners scoffed lots of goodies, such as chocolate, cultivated by third world farmers – a sound reason for polishing off a block if there ever was one.

And, now, you can even sup your way through a bottle of wine without it stirring your conscience.

For the uninitiated, Fairtrade Fortnight, between February 28 and March 13, is your chance to participate.

Across London there will be a range of events, such as chocolate and wine tasting evenings, tea dances and debates.

In your day-to-day life, doing your bit is as simple as asking for Fairtrade coffee next time you need a caffeine hit. You’ll feel good all over for it.

Fairtrade is about better prices, decent working conditions, local sustainability, and fair terms of trade for farmers and workers in the developing world.

By requiring companies to pay sustainable prices (which must never fall lower than the market price), Fairtrade addresses the injustices of conventional trade, which traditionally discriminates against the poorest, weakest producers. It enables them to improve their position and have more control over their lives.

“At the moment we have long, convoluted supply chains where the bulk of the money is absorbed by manufacturers and retailers of products and very little goes back into the actual commodity,” says Malcolm Clark, campaign co-ordinator for Fairtrade London.

“Fairtrade puts a floor under a market, so that in bad years the producers are not at risk of losing everything to creditors and, hence, they can continue to farm, invest in their family, in their community, in their healthcare and their schooling and they are less at the mercy of global commodity trading or climate change.” 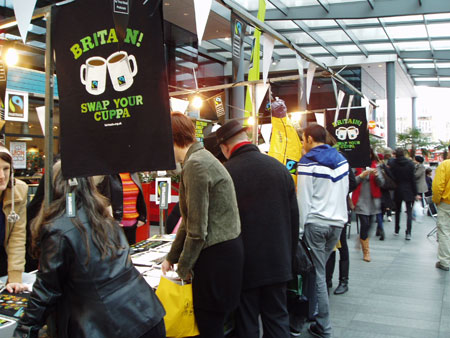 Pleasant persistence by consumers to get retailers to stock Fairtrade goods has seen the movement expand.

“If you pick up your coffee from a cafe that is not Fairtrade, request they stock Fairtrade coffee. In your workplace, suggest that the tea bags are Fairtrade,’’ Clark suggests.

There are 3000 Fairtrade products in the UK, including juice, flowers, clothing and even balloons. Buy these brands and start voting with your wallets:

Visit fairtradelondon.org.uk to find out about Fairtrade events in your area and to download a 2011 Fairtrade guide. You can also sign a petition for Fairtrade caterers at the 2012 Olympics.

UK hotter than the Mediterranean as temperatures soar

3 of the best quirky eats in London