Some comics are much less funny in person than they are on stage. Not Tom Stade. The Canadian stand-up, who now calls the UK home and is a co-writer/co-star of the controversial, headline-hitting Tramadol Nights (more of which later), is just as entertaining over the phone as he is delivering one of his sharply observed routines.

He’s an upbeat chap whose conversation burbles with irrepressible laughter. ”I see this world as a very funny place because everybody knows what the right thing to do is, but then they don’t do it,” he says from his home in Edinburgh, where he claims to be “bringing the property prices down”.

It’s this appreciation for life’s little ironies which has made Stade such a hit. His immigrant status means he is perfectly placed to deliver scathingly funny putdowns of British life. One such joke goes: “I arrived in Wolverhampton, saw everyone in their tracksuits and thought: ‘Hey this place is pretty healthy!’”

As someone who originates from the backwoods of British Columbia, Stade is also fascinated by British language and words. “Sledging is the latest one, with all this snow around,” he says. “Where I come from we call it sledding or tobogganing: ‘sledging’ sounds dirty to me!” (And this is even before it’s explained to him what it means in cricketing terms).

He also has a whole piece devoted to the British straight-faced use of the words “faggot” or “fag” in this country.

”’Faggots’ has so many terms over here: cigarettes and little sausages or whatever the fuck they are … imagine having them all in the one place, like having meat faggots with your gay friends while you’re
trying to have a cigarette!”

Stade’s laughter dies down a little when we discuss the Tramadol Nights furore sparked by the series’ main comedic force Frankie Boyle. “I have a theory about the reason Jordan married a cage fighter – she needed a man strong enough to stop Harvey from fucking her,” was just one of the tasteless jokes Boyle aimed at Katie Price’s disabled son. The joke saw Ofcom deluged with complaints, including one from Price. 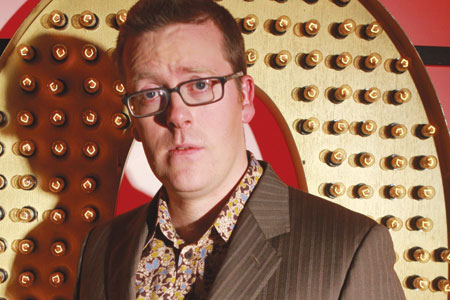 “She’s, like, a really good role model to tell people what she thinks,” says Stade sarcastically. “She can just go and have a fit if she wants cos she’s not part of my life.”

But surely eight-year-old Harvey’s an easy target: he can’t defend himself.

“Well it’s not a defence thing, because it doesn’t happen. This is the thing about ideas – it’s just an idea that’s thrown out there, it’s not an attack, it’s a ‘what if’. Every joke is a ‘what if’ … nobody hates Harvey, if you know what I mean.”

Of Tramadol Nights he says: “Me, Jim [Muir] and Frankie are just sitting there going ‘I wonder what the fuck we can write that will absolutely piss everyone off’ and we seem to have achieved that.”

Are any jokes off limits, then? “I think when it becomes off-limits is when it’s not funny, when nobody laughs. You could have the darkest joke in the world and if everyone laughs at it then it’s not off-limits.”

Hmm, judging by the rash of “Is Frankie Boyle really funny?” pieces that have broken out in the press (and not just in the moral-outrage land of the Daily Mail) it would seem that Boyle’s shock-for-the-sake-of-it humour could be classed as “off-limits”.

Still, whatever your opinion of Boyle, Stade is on the cusp of “comedy greatness”, if you can believe the critics.

His examination of male/female relations is particularly sharp and sometimes cringeworthy. His material is based on his own marriage, not that his missus seems to mind.

“Well, she writes them with me,” explains Stade. “If she thinks something’s funny right in the heat of an argument she’ll go: ‘We gotta write this down!’ cos it will always end up with us laughing our guts out.

“One thing that makes her laugh is my joke about why women talk too much: because they’ve never been punched in the head. She seriously laughed for 20 minutes.”

Can he see himself becoming a mega-star like Michael McIntyre, upon whose Comedy Roadshow he has appeared?

“Guys like Mike, they all take the road of not offending one person … I like to tread the line, sometimes … it’s good to challenge people’s perceptions.”

A job for the boys: Fancy taking off your clothes for money?