The 34-year-old was given the boot after a failing a task in which he had to lead the men’s team in making, then selling sausages. The women’s team came out top of the sausage wars, making £15 more than the lads.

However, it was Harris’s bossy leadership style which was his downfall, rather than the £15 loss. Fellow Apprentice Raleigh Addington described him as being “like a bull in a china shop”. 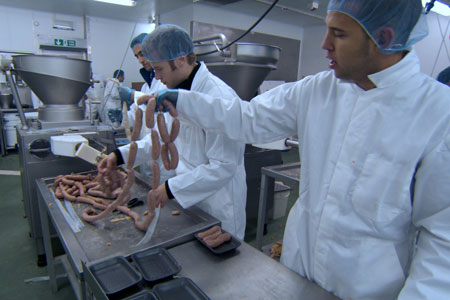 Sugar cut to the chase, telling Harris: “Dan the message from your seven colleagues is not good.

“On balance, the failure of the task in this particular case is down to the team leader. You had your chance and you blew it. Dan – you’re fired.”

Harris confessed that he had to watch the episode back from behind a pillow, he was so mortified by his bossiness. After being fired, he admitted: “I should have been fired.

“The way I went about it, to bully people, I think was the wrong approach and not my intention. It is certainly not reflective of the way I do business. Business relationships are built over months and years, you have time to formulate a partnership with staff.

“We had 24 hours to come up with something, get it to market and actually deliver.”

Leading in this year’s cockiness stakes is Apprentice hopeful Stuart Baggs who told the world: “Everything I touch turns to sold. I am Stuart Baggs the Brand.”

Baggs was so sure he wouldn’t be leaving the house last night, he boasted: “I’m going to bring my suitcase today and I’m not to pack a single thing in it. It is going to be completely empty because I’m not going home today.”

Do your worst Lord Alan!

Scouting for Girls on where they hang in London, the X Factor and their fans