“As a pretty sturdy guy, and a keen cyclist, I have to admit I’ve never really never thought of Kate Middleton or Anna Pavlova as training inspiration before. I’m a little non-plussed.

“But there’s a first time for everything, and this is all part of my lesson on how to ride an electronic bike in the Bernese region of Switzerland.

“Andre explains that less effort actually gets the bike to do more work, making cycling and even climbing hills easy and sweat-free.

“Everyone else in my group seems pretty content with the added assistance the electricity provides, but I’m a big fan of cycling the old-fashioned way. I can’t help thinking: “If it ain’t broke, why fix it?”

The mountains and farm-covered countryside of northern Switzerland are prime biking territory. 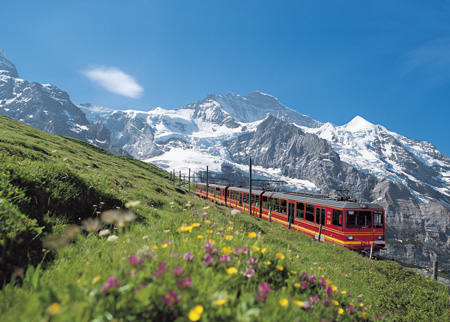 The scene is classically Swiss – green, natural, with gentle clanging from Alpine cow bells sounding across the hills and valleys.

On our e-bikes, we ride past lavender fields and classic flower-covered farm chalets, racing down hills and effortlessly climbing to the tops of others. Always in the distance are the serene white peaks of Eiger, Mönch and Jungfrau.

After a few hours free-wheeling, we park our bikes close to a grumbling line-up of bulky cattle at the Emmental Show Dairy.

Here we witness a traditional cheese-maker stirring milk from the Alps’ most important residents in a copper vat over a fire – the curd of this white gold will soon become a round of the region’s famous holey Emmental.

We taste the cheese at all stages of its evolution, from the creamy young varieties through to its deeper and nuttier incarnation that’s been aged for 18 months.

In the afternoon, we ride on through the countryside to Lützelflüh, where a toothless Swiss man named Rudolf teaches us how to play platzgen, a traditional Bernese game that involves throwing a heavy piece of metal – a star-shaped discus – at a pole stuck into several tonnes of clay. 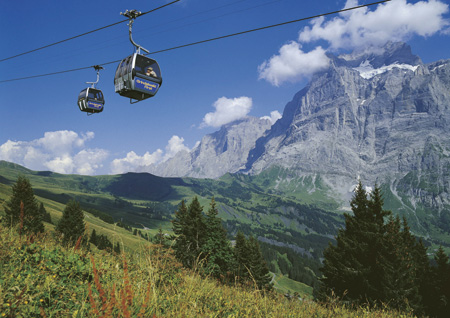 It’s important, Rudolf says (as Andre translates), not to stand in front of the thrower. There’s speculation as to whether his absent teeth had something to do with him being a victim of this, so we take heed of his advice.

Platzgen is a simple game, a bit like amped-up boules. Rudolf keeps taking me aside and explaining in detail, with lots of pointing, exactly where I’m going wrong. For all I know he could be telling me: “I see a great platzgen champion in you.”

My German’s a little rusty. Our group heads over to our home for the night in Bern, the Swiss capital, walking through Old Town’s cobbled streets.

We eat at Altes Tramdepot, a big, loud, lively hall where hearty food is served, before getting stuck into its deliciously crisp local brews. Plenty more bars in the town centre turn out to be buzzing too, so we push on through to the early hours.

There are worse ways to shake a hangover than climbing ladders, dangling from ropes and hooks, and zip-lining through the treetops, so first thing the next day we drive south to Gantrisch Rope Park (£23; seilpark-gantrisch.ch) in the pine forests on the mountainside. 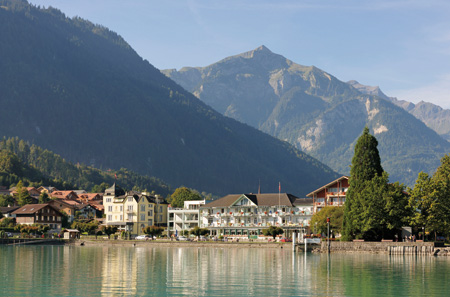 I take on along and testing climb up a ladder up the side of a tree, from where a series of bridges, high-wires, hoops and other obstacles stretch out ahead.

Maybe it’s the rope moving beneath my feet or the alcohol still in my blood, but when I see the ground 36m below, the fear factor is suddenly intense.

In the afternoon, we arrive in Interlaken, which is known as the ‘adventure capital’ of Switzerland.

It’s popular with hikers, bikers, kayakers and, as I find, Segway-ers, riders of those two-wheeled vehicles that can hit 20kmh with a gentle lean.

We chug around Interlaken on these, visiting the sparkling lakes of Thun and Brienz, which are set against the backdrop of snow-capped mountains.

The ride is gentle but the scenery is heart-stopping.

Finally in Interlaken, I ride a train and then a gondola slowly up to the top of Jungfrau mountain to the First Flyer, an 800m zip-line, high above the ground.

It’s a huge adrenaline rush as I’m launched in the harness out into the sky.

But, despite the speed reaching up to 84kmh, the ride is extremely smooth, so much so that as I fly through the fragrant forests, it crosses my mind that now would be the perfect time for another one of those tasty cold beers. 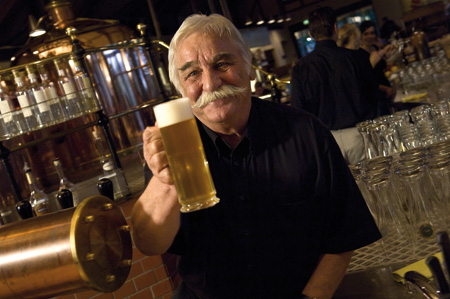 Budget: The large and rambunctious hall of Altes Tramdepot is often busy with tourists and locals.

It’s especially popular for Bavarian sausages and Tram beers, which are brewed in the middle of the restaurant. Meals from £20.

Midrange: Easy-going and fashionable, Restaurant WineArt is a bar and lounge with Mediterranean cuisine and, as the name suggests, a good selection of wine to go with it.

Luxury: The very grand setting of Kornhauskeller is inside an old granary.

It serves food from different Swiss regions, including the Bernese specialities. About £30 per meal. 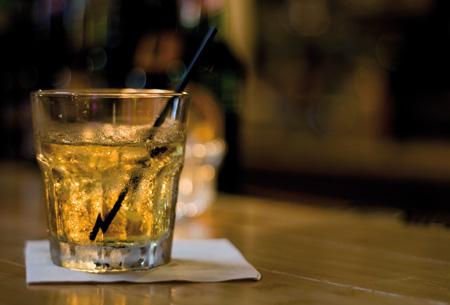 Budget: The Kreissaal bar in Bern has a good selection of whiskies in the upstairs section and a cool, minimalist comfy area in the downstairs cellar. £2.40 for a small beer.

Midrange: Lively club Johnny’s fills up with a cross section of Interlaken society, from bearded motorbikers to the beautiful people. £4.60 for a bottle of beer.

Luxury: The exquisite Sky Terrace behind the Schweizerhof turret gives a panoramic 360° view over the UNESCO world cultural heritage city of Bern. £5 for a bottle of beer. 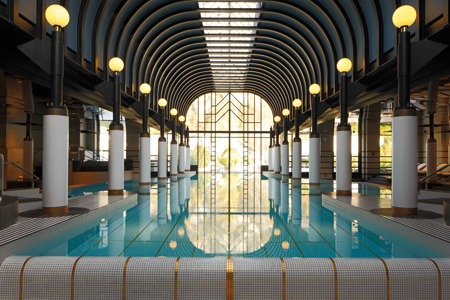 Midrange: Cool, trendily designed Hotel Bern is in the heart of the Old Town of Bern, not far from the clock tower.
Double room from £174pn.

Luxury: Victoria-Jungfrau Grand Hotel & Spa is a five-star hotel and spa resort with a classic English feel, situated on the edge of the central park in Interlaken. Superior rooms from £350pn.

Crocs and Critters, The Realisation of Dreams in Northern Queensland

Bus at the City of London