Gym memberships don’t have to mean interminable hours on a treadmill, or lifing weights in a studio full of grunting oafs.

So, if having sized up your Christmas paunch, your new year’s resolution was to frequent the gym, take heart that they are getting gimmicky, offering fitness classes inspired by trends and TV shows to help you spice up your workouts.

Only real men can pole dance, says Justine McLucas, an investment banker-turned-pole dancer and founder of Ecole do Pole.

If you like the sound of that challenge, fellas, round up your mates for a tailored class in studios in either London Bridge, Earl’s Court, or Fulham.

If you don’t mind being shown up by lithe women, try the practise and pole conditioning, or circus-style conditioning course. You’ll put together a short routine over the period of the course. A three-week introductory course is £75, or it’s £110 for a six-week course. It’s the modern man’s

way to a rippling six-pack, surely.

Tronjitsu is inspired by the free-running and martial arts movements featured in the 3D Disney film Tron Legacy and game Tron Evolution.

Troy Dureh, celebrity trainer, is the brains (and brawn) behind this 60-minute cardio workout using spring platforms, which you bounce on to the new Daft Punk album Derezzed, also in the flick.

Classes are on at fitness chain Gymbox and cost £8 for non-members. 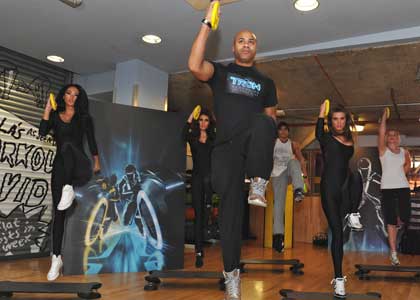 Get your Gleek on

workout on Sunday, January 16 could just do it. Led by dancer and choreographer Liz Bayley, you’ll learn the routines to all the classics of the runaway TV show to release your inner Gleek.

For something more aggressive, the Canary Wharf club also offers the Fight Klub class involving a freestanding boxing bag used to work both burn fat and tone muscles. For members only.

If you need to be ordered into doing exercise or prefer the great outdoors to a workout class, a fatigue-clad sergeant barking demands might be your thing.

British Military Fitness runs workouts in parks across the UK, led by serving or former members of the armed forces.

The classes incorporate running, strength and circuit training for an all-body workout. Prices vary between locations and class types, but can comein at less than £10 per class. Your introductory class is free.

Do a little twirl, wriggle your liquid hips and move like a foxy Latino in a Zumba class.

Touted as a fitness class for party people, Zumba re-emerged last year and, in 2011, it ain’t going anywhere.

Sugababe Heidi Range keeps her bod trim with Zumba and she looks alright.

It sure beats step-touches and grapevines. Classes are offered at most gyms for about £10.

It is a free online network which allows you to pay per single visit.

You set up an account, locate a gym and purchase an e-Pass, which you redeem at your chosen gym. The selection and payment process can all be done through an iPhone app. Costs vary from £5-35. Your excuses are running out.

Worried about food: What Brits think about what they eat