Dutch artist Florentijn Hofman’s Rubber Duck, which measures 15m high by 15m wide and 18m long, will swim into Cockle Bay as part of the art festival’s Day One – The Arrival.

The giant PVC bath toy was spotted in Sydney Harbour on Thursday for a dress rehearsal before its official launch.

Sydney Festival production manager Mick Jessop has been overseeing the Rubber Duck’s construction for the past nine months. 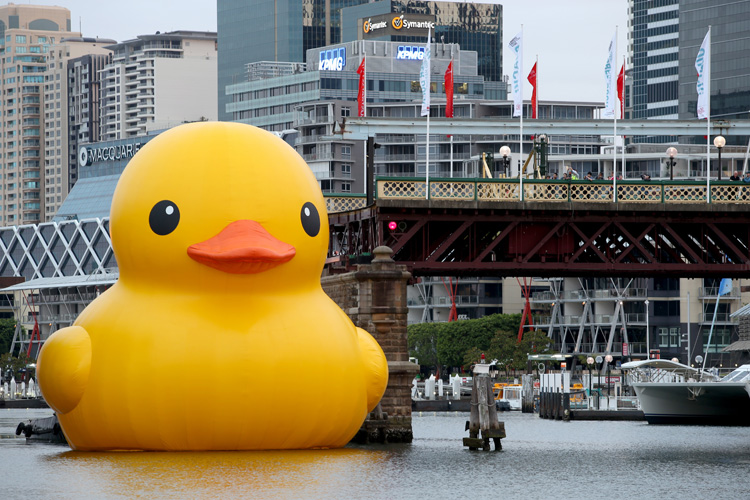 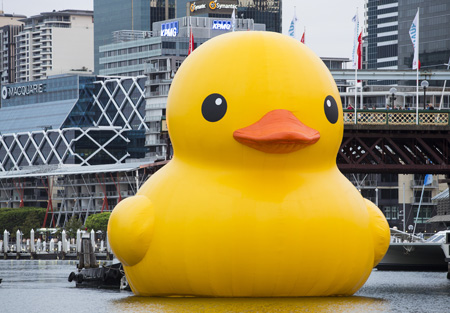 “I got to go inside it and see how it goes up and down – it’s like being inside a big yellow bubble,” Mr Jessop said.

“We’re using these beautiful heritage-restored tugs, they’re going to push in the duck, these tugs are going to be completely dwarfed by the duck. It’s going to look like a huge bathtub.”

The giant toy-like sculpture took three people three weeks to sew – approximately 6km of stitching – and takes four blowers about half an hour to inflate.

Hofman’s Rubber Duck was constructed in New Zealand by a company that specialises in sewing stadium roofs and is the most recent of Hofman’s giant rubber creations which have appeared in locations including Osaka, Japan; Auckland, New Zealand; Hasselt, Belgium and Sao Paulo, Brazil.

Banksy artwork to be saved and restored