The Falls family and I descend upon the Enmore Theatre eagerly anticipating round two of WEP and Hot Chip.

World’s End Press deserve a massive mention. Although they released their first song back in 2010, they have been somewhat living in the shadows and have developed more of a cult following – their following is now rising, and rightfully so.

I was massively impressed with them at Falls but to see them again just galvanized my new found love. As a band these boys are as tight as camels arse in a sand storm. The Melbourne-based band have a slight connection to New Order but have the scope to fall into hypnotic jams like The Whitest Boy Alive.

The super-future disco boys can really work the stage – Sashi on bass has the kind of mesmerizing leg movements you’d see in an old Motown music video, whilst John Parkinson engrosses himself emphatically into their sound.

Hot Chip were outstanding! They were amazing at Falls, however with a festival time slot you only get a taste of their songs and as the band have such an array of quality tracks from five albums – seeing them alone was a must for me. It was almost like a two hour DJ set as they played continually, with rarely a break between songs. The drummer – Sarah Jones was put through her paces and she did not disappoint.

The nerdy British electronic group shaped a magical energy which created such an addictive atmosphere, I lip read Jones at the end of the set and her words were – “Wow, just look at this crowd”.

They surprised the crowd with the tracks they played, yes they went to the classics such as Over and Over, One Life Stand and Don’t Deny Your Heart, but they stunned us with the likes of Crap Kraft Dinner from their first album. 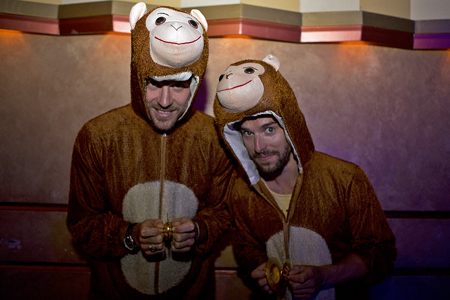 One of their fans remarked to me that Alexis Taylor lacks charisma on stage. This may be true in some circumstances, but I actually disagree – yeah he’s no Freddy Mercury – but Hot Chip have this beautiful shy image that goes with their music, creating a niche in their genre. Both Alexis and Joe Goddard are very soft spoken and gentle beings, you wouldn’t expect them to run around like Mr Mercury on a cocaine binge.

The best moment for our group was the encore – Let Me Be Him. It is such a ‘feel good’ song and it just put the icing on the cake for what was the best Hot Chip gig I have seen in many years. Two particular tracks caught my ears as well – Flutes from their new album In Our Heads and a Fleetwood Mac cover which was just fantastic!

And yes, I was the monkey with miniature cymbals at the front of the stage.

Mannering named Player of the Year

Holidaymaker has eye pecked out by bird