Giving up the goon: Travelling with parents in Yamba, New South Wales

My body is shaking as I peer over the edge of the cliff, perched perilously over jagged rocks below and with the Pacific Ocean roaring enthusiastically.

Six seconds later, I take the plunge and leap, piercing the water with force and coming up spluttering with a salt-infused nose. I know I am grateful my mum wasn’t there to witness the drop. Never mind the highest and scariest plunge on offer which involves making your way along a hanging tree branch first to clear the rocks.

I am cliff jumping in Yamba, northern New South Wales, during a roadtrip backpacking with my mum, Mary, a traditional English type who is visiting me from the mother land. The small town was voted Australia’s best town in 2009 by readers of Australian Traveller magazine. And leaping off precarious rocks is a part of Aussie Shane’s world-famous ‘ten buck tours for backpackers’ at Yamba’s YHA.

Scandinavian backpackers are now climbing a tree, desperate to get higher for a more intense adrenaline rush. “It is all about survival,” he reminds us as we scope our next jump. My heart is thumping, partly at the thought of wimping out and partly about what else is coming up.

But that is about all I can tell you. The tours are a secret. So far none of the thousands of backpackers who have been on tour have broken the circle of trust about exactly what happens. And with a boisterous Shane pumped up on copious amounts of Red  Bull, there is no messing about. He is strapped and plastered up from various war wounds from surfing accidents.

State champion sailor Shane and his family run the hostel that often becomes home for many backpackers for six months or even more as they quickly become seduced by the surfing town’s unpretentious vibe. Yamba is much less touristy and developed than Byron Bay.

And Shane’s hostel is pretty legendary in the backpacker world. Many backpackers say a stay at Shane’s super-friendly place is the highlight of their entire Aussie trip.

It is a real family affair here – we meet all of Shane’s family and hear tales of great fishing feats, big sea rescues and fearless surfers’ exploits.

There are also BBQ yacht parties where you get to sail with the locals or guided bush walks with Shane’s almost-as-crazy brother Luke.

And the hostel’s Christmas party is infamous with backpackers coming from around the world to experience the Henwood family hospitality and ride the 15-metre water slide they set up specially. 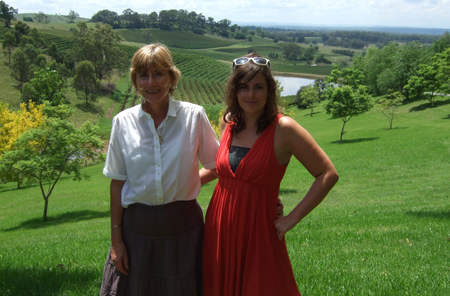 But not only young travellers stay at the YHA. I am giving my conservative mother Mary a gentle introduction to backpacking as we travel back to Sydney from Byron Bay staying in different accommodation options.

It is fair to say the backpacker hostels are not mum’s favourite. Mum is not impressed with the rattling pipes, noise from hedonistic bacchanalias fuelled by cheap goon, the lack of comfort and basic rooms.

And the sedate holiday is a change from my usual backpacking experiences too. There are no dehabilitating hangovers from goon punch or risks of being puked on by Bingo Bitch after he has downed six bottles of wine on the stage next to me – as experienced on Magnetic Island.

We take our own private room at the YHA as I know that night-time antics in the dorm won’t go down well with mum.

“I prefer yoga in Byron, walking and dolphin-watching in Yamba and food and wine in Bellingen and the Hunter Valley, but I am still embracing the experience,” she tells the young German backpackers in the kitchen.

Yamba’s reputation for having some of the world’s best surf breaks – and often highly dangerous spots – is appealing to me, but mum prefers to take a sedate walk on the beach.

At the backpackers, Shane talks non-stop about stories of the town and his own exploits and antics.

“I guarantee backpackers will stay longer in Yamba after doing my tour,” says Shane. “One minute you are cruising along by the beach, the next minute, you have a terrifying fright. There are big highs and adrenaline rushes.

“It is all pretty full-on, and my entire family is mad too.”

Yamba’s surfing reserves are all protected from major surfing competitions. Some of Australia’s most famous surfers – including locals Dan Ross and Laurie Turner – make the empty beaches their practice ground for big events.

There is the chance to practice your 360 and backside air moves with the family here. Shane’s cousin Jeremy Walters is a former Australian champion and teacher too. 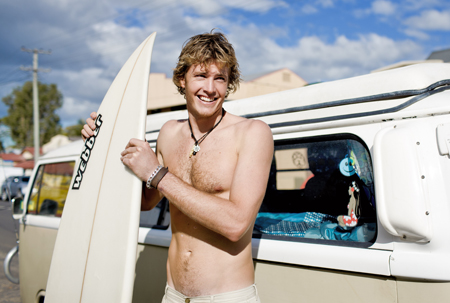 The pull of the ocean

I take to the light surf (known amongst the fraternity as ankle snappers) with Jeremy early in the morning at Pippi beach to experience a few of Yamba’s famous breaks.

It is my second ever attempt and I manage to stand up proudly eight times – and only experience a couple of airdrops when my late take-off causes me to drop through the air to the bottom of the wave.

On tour, we pass several champion surfers and hotshot grom 10–year-old Dakoda Walters, Jeremy’s son, as we survey the waves which can reach 12 foot.

Massive gates and sprawling infinity pools are juxtaposed against the unassuming beach shacks of Angourie, a few kilometres from Yamba, but open into the mansion of Billabong founder Gordon Merchant.

The life of Byron

In Byron Bay, we stay at a 1930s whaler’s house, Bamboo Cottage, which has a touch of Balinese and Pacific architecture about it. Our Jacaranda room is perfect for astronomy fans with the solar system painted and displayed on the ceiling and a map to guide you towards Mars, Capricorn and the Milky Way.

The cosy enclave is tucked far enough away from the main backpacker drag around Jonson Street that I can avoid being tempted to dive into notorious bar Cheeky Monkey’s and mum won’t be disturbed by the hoards high on goon.

Having had an amazing dirty weekend just a few months ago with an all-nighter in the naughty nightspot dancing on the tequila-soaked tables while a wet t-shirt competition got revelers high, the pull of Cheeky Monkey’s is strong.

However, we find solace in the chilled-out Beach Hotel and join locals to listen to the acoustic singers playing.

The next day, mum joins a pilates class with Classical Pilates on Jonson Street for some relaxation time in the Aussie heart of chill-dom. 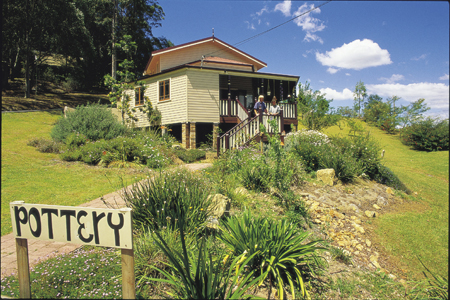 There with bells on

Four hours’ drive south of Yamba, we reach Bellingen, where the annual Readers and Writers Festival takes place in March.

The rural town, home to well-known literary figures and artists, is surrounded by the Dorrigo Rainforest and various other national parks. The western frontier town-style architecture of the area pushes out against mountains, lush rainforest, grassy plains, waterfalls and not far away, the beach at Coffs Harbour.

We take a dramatic walk through the World Heritage-listed Dorrigo rainforest during a storm with the company of bush turkeys and many birds.

We stay at the YHA which sits above the Bellingen River nestled among trees and with a balcony, hammocks and plenty of bugs.

The creaky beds and raucous party above our room disrupts mother’s slumber and I am in trouble for picking the joint. However, the nightlife – which extends as far as a curious wallaby and flying foxes in the rather sleepy town – is a quirky plus point for her during her Aussie visit.

The trip ends with a shock for mum. A leech has attached itself to her foot from our earlier rainforest walk.

And it has been sucking fervently for some time.

Blood has soaked the bedsheet and there are a lot of squeals as I wrestle with her foot and the critter to unattach it. With a hasty flick the nasty pest is gone.

Ahhh, Australia and your weird and wonderful wildlife. Just one of many typical experiences for a middle-aged woman in Oz.

Getting there: Yamba is about 1.5 hours drive from Ballina Airport. The nearest airport to Bellingen is Coffs Coast, about a 30 minute drive. Beds at the YHA Yamba from $34/night. See yha.com.au

What a legend! Russell Crowe gives $10k to man who lost home in bushfires

The Taming of the Shrew and Twelfth Night – theatre review: Propeller’s performance of Shakespeare’s classics comedies

At the end of the rainbow