Goodbye winter, hello summer: Have a ball at Beltane

Here exposed to the elements, in full view of the turning seasons, a battle is about to take place in a faerie world where passion and purity are manifest. Tonight, someone will die and be reborn – welcome to the lust and loincloths of Scotland’s Beltane festival.

Perched atop the privileged position of Calton Hill, like a stone crown upon a warrior king’s head, lies the National Monument of Scotland,  which has a bizarre story all its own. Every year on the night of April 30, this monument becomes the centrepoint of a neo-pagan night of dance, drumming, acrobatics and fire to celebrate the death of winter’s grip and the beginning of summer. But when I say ‘summer’, I do mean ‘Scottish summer’.

Standing up on Calton Hill, with the wind and the rain managing to confound my thermals, hoodie and waterproof, summer seems a long way off. This is my third Beltane, and the third I’ve spent rugged up to my ears against a cold that any sensible folk would have the decency to catch hypothermia from. Not so these modern day pagans, many of who spend the whole evening cavorting with no more than a corded banana-hammock between them and the stinging cold.

Beltane’s premise is a simple one, but this modern day interpretation of the ancient Gaelic tradition has been gilded with a great deal of performance and play. Rising like the moon from behind the National Monument comes the May Queen, all dressed in white. She is approached and courted by the Green Man who, after his long watch over winter, resembles no more than a demon of bracken and twisted roots.

Over the course of the night, the May Queen is caught between the competing powers of chaos and order, until she finally kills the Green Man, and having done so revives him reborn for a new year. They get married and happily summer can now begin. 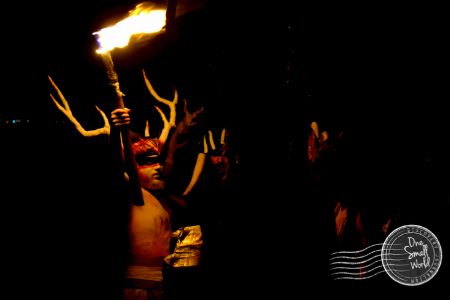 Along the way you’ll meet numerous bands of characters including the mischievous Reds, the incorruptible Whites, various drummer groups and even a fire-breathing Dragon that guards the gateway between the physical and spiritual worlds. And just like the barrier between these worlds is thinned on nights such as these, so too are the separations between audience and performer. In particular, the memorable Reds – a semi-naked whirlwind of carnal energy, who spend the evening seeding mischief wherever they can and getting up close and personal with the crowd.

Watch them writhe in tangles of arms and legs growling and chittering as the embodiment of lust and chaos, witness the May Queen and her protectant band of Whites.

The passion and fun with which Beltane is performed makes it very easy to get lost in the myth and magic of the night. Wander freely across Calton Hill to see fire-spinning, acrobatics or tribal drumming. Or press into the crowd and follow the procession through its many trials all the way to its happy pagan ending.

With every one of its participants a volunteer and with no reliance on professional actors or performers, Beltane grows – like a tree – into something special every year, and is never the same thing twice. It is wild and infectious, beautifully located and earnestly enacted. It creates a faerie world of a cold wind-whipped hill and fills it with fun and play and drumbeats to shake the frost off an old world’s creaking bones.

See One Small World for the full image gallery.

When: The evening of April 30 every year

How: Purchase tickets beforehand via the website or at the Box Office on the night

A fifth of employees would ‘sell’ back annual leave