The enormous chunk of tuna flesh bobbed on the end of the line supported by a small foam ball. Matt ladled great gobs of minced gills and guts onto the surface creating a lumpy, letterbox red slick just behind the boat. Then he struck.

We’d seen his ominous black shadow patrolling beneath us like a menacing midget submarine probing for a weakness, but nothing prepared us for what happened next. In a heart-stopping explosion of gaping crimson jaws filled with rows of razor sharp teeth, the 5 metre, 1,000kg monster breached its full torso out of the water in a triumphant display of total dominance. Gotcha!

Underwater, the view is even more terrifying. The seemingly flimsy aluminium cage appears barely strong enough to withstand the fury of this consummate killing machine. Those who remember the Jaws trilogy will recall the complete inadequacy of the metal sanctuary and in no coincidence, many of the scenes that employed live sharks as stunt doubles to the mechanical star were filmed in these very waters. Rodney Fox, the famous diver who displays gruesome body décor courtesy of the great white, is moored alongside with his own clients.

The cage is tethered to the stern with tough mooring lines and divers enter via a manhole in the top. Air is surface fed via a compressor and up to four ‘clients’ squeeze together in a tantalising clump that draws hungry and inquisitive gazes from the circling creatures. Our feet are hooked under a rail in the floor and we cling nervously to handles arranged around the sides while surveying the waters for sharks through viewing holes which strike me as overgenerous. Suddenly there’s a tug on my shoulder and a rubberised finger jabs frantically into the gloom. That famous theme tune plays in my mind as a dark shadow slowly morphs into a full size predator with a very determined purpose.

For thirty minutes we watch totally awestruck as three adult great whites glide effortlessly past in search of the tuna bait dangling rather too close for my liking. That lifeless, inexpressive eye is a porthole to a tiny brain pre-programmed for one task only. A ladle of guts excites them and they’re now intent on the juicy prize. Mouth agape and on target, Matt jerks the bait away at the last minute but the shark lunges again taking the chunk whole, thrashing heavily against the cage’s already dented structure. The water around us is full of bubbles and froth both from the shark’s turbulent antics and our combined hyperventilation.

“Mmmerrh!” I scream incomprehensibly into my mouthpiece. 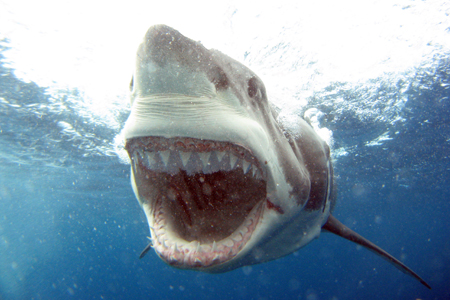 Moose, a 5m male great white shark, is a regular visitor off Neptune Island at the very end of South Australia’s Gulf St Vincent and is identified by the red tag applied by Andrew as well as the multitude of battle scars. The nearby Australian Sea Lion colony keeps the carnivorous monsters hanging around, preying on some of the four thousand pups born here each year. Andrew and Matt operate Calypso Star Charters, currently one of three licensed operations, from nearby Port Lincoln and are regularly booked out months in advance.

Cages in the pages

Shark cage diving is not without its critics. There is one school of thought that advocates a total ban on the practice, particularly that which involves ‘chumming’, as described above. The West Australian Government is not having a bar of it and has moved to pre-emptively outlaw shark cage diving in light of a recent rash of attacks on surfers and swimmers in that state.

Research done by the Commonwealth Scientific and Industrial Research Organisation (CSIRO) at shark cage diving sites in South Australia found that chumming kept sharks in an area for longer, but could not prove a link between chumming and attacks on humans. This year, the licensing of SA shark cage diving operators came under close scrutiny and at one point the whole ‘sport’ was in jeopardy.

Matt Waller, a fourth generation fisherman and founder of the tuna swimming phenomenon, has won awards for what he calls “Australia’s first advanced eco certified shark cage diving experience” where, instead of splashing blood and guts into the water, he plays AC/DC through an underwater speaker. The curious sharks gather and appear less aggressive and less prone to attack.

“We put a speaker in the water and play AC/DC and they come around. They like Back in Black, You Shook Me All Night Long, and Spiderbait’s Black Betty works really well,” said Matt in an interview with The Australian, “Talking Heads’ song Sax and Violins makes them jump out of the water.”

After the jaw-dropping exploits of the great marine marauders, those not totally spooked don wetsuits for a serene swim with the sharks’ preferred foodstuff. The playful pups and young adults are almost jumping out of their skin in anticipation and are quick to engage in exuberant interaction when the swimmers enter the water.

The mammals swirl and twirl in an aquatic ballet around their hopelessly inept and oversize playmates, yet display a generous tolerance that keeps us entertained for over an hour. It’s tragic to recall this delightful naivety was repaid with lethal consequences when both British and American sealers plundered the happy herds to near extinction in the 19th century. Even today the species are still listed as rare and endangered. 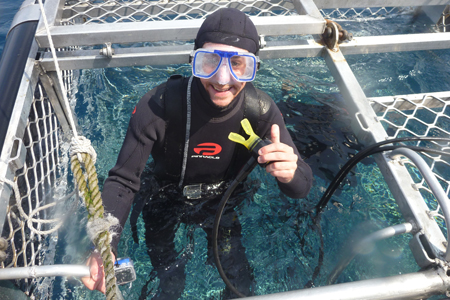 Back in Port Lincoln, there’s a visit to Matt Waller’s tuna farm and again we’re in the water, this time hand-feeding his baby (20kg) Southern Blue Fin. The tuna swimming idea came about some five years ago when Matt thought it would be cool to take a dip in one of the massive pens used to corral the fish and fatten them to market weight.

During the short ride on Matt’s launch out into the bay, he’ll enlighten you on this modern form of fish farming where schools of wild tuna captured in giant circular nets and towed – very slowly – back to port. Now you can dive in and tempt the massive, lightning-fast demons with a tiny bait fish which they will whip out of your hand before you have time to flinch.

So whatever your aquatic thrill, Port Lincoln at the tip of South Australia’s Eyre Peninsula can deliver the serene or the scary, you choose – or just do it all!

The six-day ‘Secrets of Eyre Peninsula is with Nullarbor Traveller. ’ The tour includes Flinders Ranges, Coodlie Park Farm Retreat, a surf lesson and tuna swim. the-traveller.com.au. Calypso Star Charters shark cage dive is from $495. sharkcagediving.com.au. A double room at the Port Lincoln Hotel from $150/n. Beds at the Port Lincoln YHA start from $35/night.  yha.com.au. For more action-packed ideas in South Australia, head to southaustralia.com and click on the ‘adventure’ tab.