The man whimpers as he is dragged into the Pacific, screaming as the salty water laps at his red, raw buttocks. Tears spring to his eyes as a team of villagers support his limp body, firmly holding him in place. Around them, island children slap the water to keep a frenzy of butt-flesh hungry fish at bay. “At this point I was pleading to God to give me a heart attack so I could die,” says Chris Solomona. “A lot of men commit suicide after the first section of a full-body tattoo.”

The 43-year-old absentmindedly rubs his buttocks as he continues; the memories of his painful tattoo as clear as his Samoan archipelago surrounds.

Chris endured the gruelling process in 1998, aged 31. The twelve sections take up to six hours each to complete and despite warnings from his grandfather, Chris waltzed in to over four weeks of “agony, pain and pure hell”.

As he whips out the implements used to mark his body I grab my posterior in sympathy. Not a needle in sight. Instead, sharp tattooing combs made of boar’s tusk, turtle shell plate and candlenut soot pigment. The combs are hit with a 23-inch long mallet and the pain, Chris reiterates, is intense. Once inked there is no looking back; failure to complete the full twelve sections results in shame so intense, death seems an easier option. Six strong assistants held Chris down while the revered tattoo artist went to work. “It was the worst decision of my life,” admits the strapping local. But with its bloody completion came the transition from boyhood to manhood and a vow of dedication to his family, village and country.

This, in a nutshell, is the beauty of Samoa. Traditional tattoo torment isn’t for everyone but a strong sense of local pride, family and culture, is. So too is a laid-back way of life.

The meaning of ‘Samoan time’ struck yesterday, when I was met by my talkative guide Anthony and his brief introduction to local road rules. So relaxed are these cheery folk, the Samoan Government’s right to left–side driving change in 2009 caused little mayhem. Anthony chuckles. “Accidents? Nope… we’re too relaxed for that!”

Despite his insistence that island motoring is a seaside breeze, the 45-minute journey from airport to Apia is as thrilling as your average Ghost Train. Kamikaze chickens, roaming pigs, daredevil domestic dogs and the occasional human spring from the overgrown tropical roadsides, darting across the bitumen without a sidewards glance. It’s like Super Mario Cart without the point system. No wonder the locals stick to the 55km/hr speed limit. Surprisingly, roadkill is rare – a swift toot keeps beasts at bay. Most flights in to Samoa burn the post-midnight oil, so a view of local surroundings has to wait until morning. But oh, what a worthwhile wait. 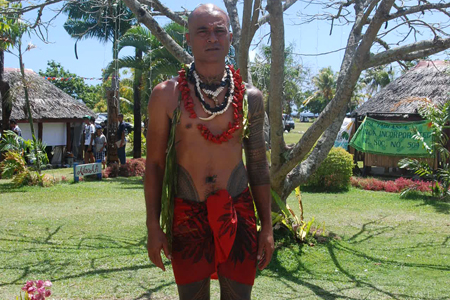 Artists have a field day painting the vibrant Samoan landscape – if they had the palette for it, that is. While Apia provides the island’s biggest spread of restaurants, bars and nightclubs (most close at midnight on Saturday folks, so get your party started early), off the beaten track is where the real optical smorgasbord is found.

Retinas explode with an onslaught of colour as Anthony steers his 4WD through tropical frond-flanked backroads. There’s pride in his voice as he points out his home, and, like all young Samoans, shows beloved devotion to both his parents. It’s enough to make a traveller feel guilty about not calling her own more often.

There are 366 villages in Samoa, each boasts its own chief and at least two spectacular churches. Religion is extremely important and for this reason Sundays are a state of complete shutdown. “If you ever have a one-day stop in Samoa make sure it’s not a Sunday!” Anthony chuckles (it’s true – finding food on the day of rest can be a challenge – if you’re in Apia, Farmer Joe’s supermarket is a saviour).

The home of Treasure Island

Elaborate gravestones sit proudly in front of each household – shrine-like in their size and grandeur. Family members being buried a stone’s throw from the front door is both a sign of respect and marks generations of property ownership.

The rainbow abodes are a spectacular sight. Our destination, however, is a more European affair. Robert Louis Stevenson’s towering white mansion is now a historic homage to the late Scottish author of Treasure Island. The sickly writer and his family moved to the island where the climate eased his tuberculosis symptoms. The locals fell in love with the good-natured white man – and he with them.

Anthony lures me up the neighbouring Mt Vaea, on top of which Stevenson was laid to rest. “How did the village people drag that coffin up here?” I gasp. Pure willpower and adoration, it seems. Mission completed, the urge to vomit is suppressed by the spectacular view. No wonder the old guy loved this joint. 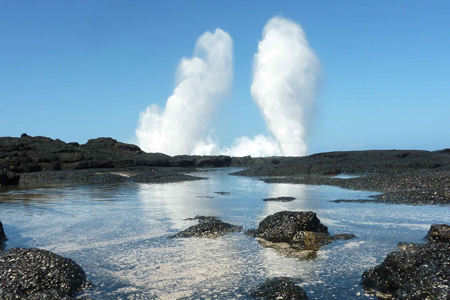 Our next stop is rest-related but not before a dip in Togitogiga Waterfall, the unforgettable Sua Trench and a visit to the far side of Upolu Island’s South East coast, where expats Wendy and Chris Booth run Seabreeze Resort. Like Stevenson, the pair fell head over heels with Samoa and set up their high-end lagoon-fronted resort in 2007. Australian builder Chris and English wife Wendy’s dream nearly came to an end in 2009, when a wave of earthquakes and a devastating tsunami hit.

“We were here in the honeymoon suite when it hit,” says Chris. “We held on to trees to stop from washing away.” The suite, award-winning restaurant and adjacent rooms weren’t so lucky. Standing in the newly rebuilt deluxe suite, it’s hard to imagine.

“Leaving didn’t cross our mind. It could be a thousand years before the next one – and we love it here”. It is a spectacular pad and if your budget doesn’t stretch to a few nights here at least splash out for the best meal to be had gobbled in Samoa.

Further along the coast, the local owner of family-run business Faofao Beach Fales also lost everything. “We didn’t have any warning. We saw the water sucked out to sea and ran”. Today she is all smiles. I can’t lie – I’m petrified about having a mere mosquito net and banana-leaf thatching between my noggin and the waves. Despite an offer to bed down in the alternative multi-storey accommodation block, I decline. This true Samoan experience can’t be passed up.

With first light comes a fear conquered, a crab in my trainers and a vow to do it again soon. The chance comes sooner than expected. 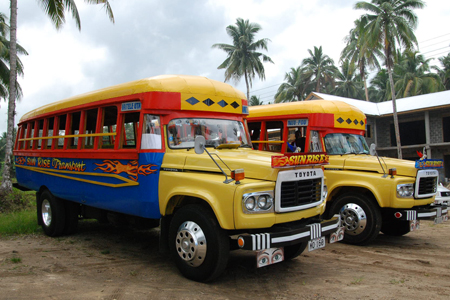 Fale dwelling is the sole form of accommodation available on Manono Island; a tiny dot on the Pacific accessible by a small tin boat and a sense of adventure. It’s as close as you’ll get to simple, Samoan living; no dogs, no cars, minimal technology and big smiles. A stroll around the island takes 1.5 hours – longer if you oblige and stop to snap the endless stream of children pleading “Pue-ata” (“capture my smile!”).

Here, another foreigner temporarily calls the island home. 65-year-old Euan Cameron is a white-haired New Zealander-turned honorary Manono man for six months of every year. He greets me alongside local chief Leota (owner of Sunset View Fales) and promptly declares how blessed he is to live here. Despite difficulty finding a shop selling bottled water (red cordial-filled plastic bags seem to generally suffice), it’s hard not to agree.

As darkness falls three bedraggled European travellers emerge from the sea, dripping wet, freshly caught tuna in hand. Their boat is moored a few hundred metres out and they’ve decided to swim ashore. Locals welcome them with gusto and we sit around a starlit table to feast on fresh lobster, battered tuna steaks and local delicacy Oka (raw tuna in lemon and coconut milk). Supo Esi (papaya soup) is also a breakfast must.

Generosity comes as natural to Samoans as breathing and, when it comes to physique, big is beautiful so abandon your girth and go with it.

Island goodbyes are heartfelt and later, as my plane embarks on what must be the most spectacular lift-off in existence, a pair of fisherman abandon their hooks, look up, and wave. Genuinely enthusiastic from “Malo e lelei” to “Alu”, these people are eager to share their special little world with the rest of the globe.

It’s cheap island living, minus the tacky souvenirs and overwhelming pressure to buy. Go, revel in simplicity and treat them and their wonderland with respect. You’ll be inspired to call your mum when you’re done. Trust me.

Bitcoin Versus Altcoins — Where to Invest Your Money?