It’s huge – from north to south, it stretches further than London to Moscow – and simply covering the distance is a challenge. Pickled egg, marinated fish and fermented beans can be hard to stomach for breakfast some mornings, too. But between the generosity of the people, the vast brilliance of the countryside and the endless combinations of fantastic food, we’re well-compensated.

Among the strange, wonderful experiences of the tour were a handful of particularly memorable highlights.

The best of British Fukushima

From the moment the car turns into the drive, something changes. We have, it seems, gone through a wormhole and ended up back in Britain – the buildings are British, the currency is the pound and everyone speaks English. Odd, very odd, especially as we’re in Fukushima, the now notorious prefecture north of Tokyo. The only un-British thing here is the radiation reading. While it’s unlikely you’d pick British Hills as a holiday destination in itself, it makes a great stop for those pining for the West: the buildings were all built in the UK first, disassembled and rebuilt here; roast beef and Yorkshire puddings are on the menu; and there’s an eerily authentic pub.

The chicken or the horse Nagano

Tucked away in an alley not far from the train station in Matsumoto, Nagano, lies Tori Shin, a small yakitori restaurant. It serves toriwasa: uncooked chicken. Or almost uncooked. Crucially, toriwasa isn’t absolutely raw – it’s boiled for 30 seconds to give it a millimetre of white coating, which is just enough to kill any bacteria. The opaque pinkness on the inside is totally safe, and utterly delicious. Seasoned with wasabi, there’s a little sake, a little salt and a lot of tenderness. Don’t fancy it? Matsumoto’s other speciality is raw horse meat.

The way of the wanko Iwate

There are various stories about how the practice of wanko soba came to be. One says that a feudal lord passing through
Iwate on his way north stopped at a small inn and demanded something to eat. The humble owners produced one small bowl of cold noodles in the hope it would appease him – or maybe put him off altogether. Unfortunately, he loved it, and demanded more. Today that gluttonous spirit lives on throughout the prefecture: the idea is simply to eat as many small bowls of buckwheat noodles as you can. In the city of Hanamaki, this is done with a waitress standing over you, dishing out more and more until you surrender. The record for consumption stands at an impossible-sounding 250 bowls, but anything approaching 100 is disgustingly brilliant. 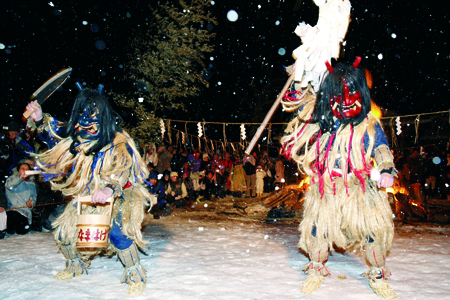 Yes, it’s the home of a massive studio that produces cartoons for children but comparing the Studio Ghibli museum to Disneyland would be like comparing Kobe beef to McDonald’s. Walking around this place on the outskirts of Tokyo is like walking around inside the brain of Hayao Miyazaki, the brilliant animator behind the studio – and, perhaps most famously, the Oscar-winning Spirited Away. Even if you’re not too familiar with his work, this museum is still magical: alongside the swathes of film memorabilia, there’s a gallery unlocking the secrets of animation, and a cinema screening original Ghibli work, just in case you’re not sure what all the fuss is about.

Even if you don’t know the snow monkeys of Nagano, you know the snow monkeys of Nagano. Used in countless adverts and nature documentaries over the years, the red-faced, Japanese macaques are among the most famous simians in the world. Traditionally, the monkeys go for a bath in the onsen (hot-spring) water only in winter, when the snow in this prefecture is deep and lasting. But such is the popularity of the monkeys now, and the tourists’ desire to get those National Geographic shots of them bathing, that they are gently cajoled into the water with food any time from autumn. So an unnatural phenomenon has become more so, but for about six months of the year, you can watch them do their thing at the Jigokudani Park near Yamanouchi.

In the south of Sado Island, in an enormous dojo – a gathering place for students of martial arts – we watch 56-year-old Sensei and Kodo veteran Shinichi Sogo demonstrate his formidable 30 years of experience on the traditional Taiko drums. Kodo is a drumming troupe, based on the island, that performs the traditional rhythms of regional Japan around the world. The sticks used are typically very light, but this Sensei wields a chunk of oak the size of a baseball bat and the weight of a bowling ball. You could bludgeon a horse to death with this thing. He invites us to put a hand on one side of the biggest drum, before he moves around the other side and, one-handed, attacks it like a deranged executioner. Our hands feel as if they are being scalded for being naughty as they jump off the leather.

At the right time of year, there are almost endless skiing opportunities in Japan, and while there may be prefectures with better powder than Yamagata, there aren’t many that have anything quite so spectacular as the snow monsters. Fierce winds blow moist air up to the peaks of Mount Zao, which in turn clings to frozen pine trees near the mountaintop, and by January the weird creatures have arrived. Any hint that a tree lies underneath has been smothered completely, giving the impression of colossal white creatures lurching over you as you navigate the run. There’s good news at the bottom: the town of Zao has one of the warmest, most plentiful hot springs in the country.

When watching a video of Namahage, the traditional bogeyman, in action, it can be hard to know when you’re supposed to laugh, if at all. In the appropriately named Oga district of Akita prefecture, a museum dedicated to the marauding ogres shows them in action, trying to snatch screeching children from their homes. The parents play dumb, making half-hearted pleas with the monstrous raiders: “Oh no, Mr Namahage, I’m sure he’ll do his homework on time if you just spare his life!” The whole thing is hilarious for everyone – other than the kids, of course. You might have the smile wiped off your face, though, if you hang around for one of the daily Namahage re-enactments which, like all the best Japanese horrors, is made more scary by the fact that you can’t understand what they’re saying.

If you’re not careful with sushi, you can spend an awful lot for very little. But anywhere close to Tokyo’s vast Tsukiji fish market – one of the capital’s most popular attractions, and one of the largest wholesale food markets in the world – shouldn’t have any excuses for giving you substandard seafood. We can’t find anything better than Chiyoda Sushi. It might be a humble, unspectacular stand-up joint but everything we try is a winner – even stuff we’d normally avoid, like eel. Best of all, the money saved on seats is passed on to the punters: the superlative sushi is generally just Y80 ($1) per piece.

Robinson In Ruins – review and trailer