A hit of craic: see Galway City in 48 hours

10:00 Start your day at Eyre Square, Galway’s busy main public space, to get a feel for the city’s energy.

11:00 An interesting approach to bringing historical and contemporary Galway together can be puzzled over at the neighbouring Eyre Square Centre shopping mall, parts of which have been built over the city’s medieval walls.

Checking out the ancient stonework underneath a glass atrium, surrounded by high street stores, is nothing short of odd.

12:00 Now make your way to the Spanish Arch (corner of Long Walk), one of Galway’s most famous landmarks, on the bank of the river Corrib.

The 16th-century bastion’s original function was to protect merchant ships from looting; the name ‘Spanish Arch’ refers to frequent merchant trade with Spain at that time, as Spanish galleons would often dock here. 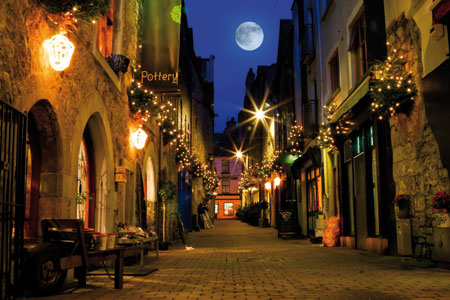 12:30  A short walk from the arch, back in the direction of Eyre Square, is Lynch’s Castle (corner of Shop and Upper Abbeygate streets).

Built in the 14th century, it is considered the best example of a town castle in Ireland, though this kudos is a little muted by the fact that the building now houses a bank.

Still, the interior remains impressive, with coats of arms and stone fireplaces left intact, while the façade continues to boast the odd gargoyle.

13:00 Time to seek out what Galway does best – pubs. Monroe’s Tavern is a local favourite, serving up top nosh from 9.30am-9.30pm. Try the open Irish crabmeat sandwich on soda bread (£8.25) – Galway is known for its superior seafood, which is why it hosts the Galway International Oyster & Seafood Festival every year. Catch this year’s fishy festivities from September 28-30, including the World Oyster Opening Championship. 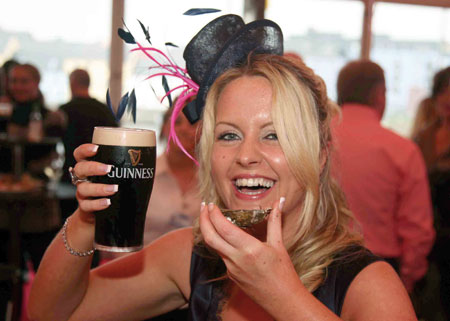 14:00 Walk off lunch with a stroll to Salmon Weir Bridge (St Vincent’s Avenue). Upstream, the Corrib cascades down the weir towards Galway Bay, while in summer, you can often see shoals of salmon fighting up to the Corrib for spawning.

15:00 Now cross the bridge to the other side of the Corrib, where you’ll find Galway Cathedral. It’s an imposing sight on the river, one of Galway’s largest buildings, with its Renaissance dome a major feature of the city skyline. Admission is by donation.

16:00 Time to soak up some more of that atmosphere we were telling you about. Tig Cóilí (Mainguard Street) is a great little boozer with live traditional Irish music blasting out as a matter of course. Make sure you sink a few pints of Galway Hooker Ale, an Irish pale ale produced by the local craft brewery.

19:00 Great steaks and seafood at McSwiggans (mains from £12) make this restaurant/ pub/ café/ bar a good bet for dinner. The bar stays open until 1am, but Galway really comes into its own at night, so we recommend you don’t get too cosy.

21:30 A pub crawl will help you see the best of Galway after dark. Go to The Crane Bar for folk music and dancing; the King’s Head for big crowds and live rock; and Roisin Dublin for its rooftop terrace. Around a quarter of the city’s population is made up of students, so you can’t really go wrong when it comes to a night on the tiles. 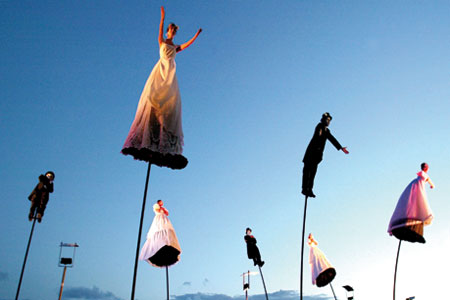 12:00 Drink lots of caffeine with your free continental breakfast at the Galway City Hostel (beds from £12pn), then head over to Salthill Prom.

This seaside promenade, which runs from the edge of Galway City to the suburb of Salthill and is the longest in Ireland, is always buzzing.

Take a stroll and gawp open-mouthed as brave/ crazy types jump from the concrete high diving board on the promenade into the chilly Atlantic. Then settle on one of the sandy beaches along the prom and let the lapping waves soothe away your hangover.

16:00  After a lazy day, get back in the saddle and sink a Guinness or two in Cooke’s Thatch Bar (2 Newcastle Road). This cosy little thatched-roof affair is renowned for the quality of its black stuff.

Stomach settled? Treat yourself to a fish supper at McDonagh’s (22 Quay Street), served up at communal wooden benches for about £6.

19:00 If you fancy a break from the booze, try the Druid Theatre, which puts on new and classic Irish plays in what was once an old tea warehouse.

Flights from London to Dublin start at about £53 return with Ryanair  ryanair.com The train from Dublin to Galway takes three hours. Tickets start from £25 return  irishrail.ie

Other traveller reviews on Fiji

New Zealand man cooks and eats his own finger