It’s hard to say which way a Test lies after one day. After all, it can go for five days so the first of them is a bit like starting a jigsaw puzzle. When you begin you don’t really know how or where everything fits and, after a period of time only the merest glimmer of sense can be made from your efforts.

If history is anything to go by, anything over 350 for a first innings will be a good score at the Sydney Cricket Ground. But to be all out for 326 after being sent in to bat having lost the toss, and after being 5-97 at one stage, will be considered an early victory for Australia.

The 127-run sixth wicket stand between Brad Haddin (75) and Steve Smith (115), who charged on to a wonderfully expressive hundred may well have broken the backs of an already weakened England.

Australia were there for the taking at 4-94 at lunch but the tourists couldn’t produce back-to-back sessions.

Haddin, whose Test career looked dead and buried this time last year, has been a revelation in this series, arriving as saviour at key times throughout. 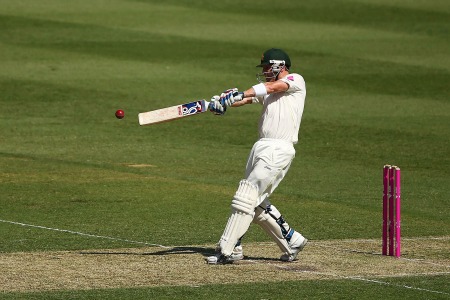 Smith’s second hundred of the series couldn’t have come at a better time for the Australians. Teetering at 5-97 the 24-year-old showed determination and flourishing stroke play to solidify his spot in the side.

For the English – so ruthless, brazen and efficient in the first session and a half – the first day of this Test will sting as bad, if not worse, than any that’s come before it in the series. More so than any other time this series they had the Aussies on the ropes yet still somehow let them slip through their fingers.

It didn’t help that debutant Boyd Rankin – the beanpole quick from Ireland equipped with a steepling bouncer – limped off with a hamstring injury in his second spell. He briefly reappeared but embarrassingly managed just one delivery before realising the extent of his pain.

Durham’s Ben Stokes was called upon to fill the breach though and he did it with aplomb, claiming six wickets to minimise the damage done by letting the Aussies back into the contest.

The other of three debutants, leg-spinner Scott Borthwick had a day to forget, getting smashed for 49 off his seven overs with his one wicket coming when Mitchell Johnson tried to hit him out of the park.

With the Aussies bowled out, England’s openers had to face a 25-minute onslaught which opener Michael Carberry – who kept his spot ahead of the dropped Joe Root – didn’t survive. He tickled a Johnson delivery down the leg side and into the hands of Nathan Lyon.

Going into day two, England are 1-8 on a lively Sydney green-top and will have to bat out the day to be any chance of avoiding a 5-0 clean sweep in the series.