Head to Cairns for some northern exposure

The bungy jump had seemed a good idea the day before. At the time, I’d been supping an afternoon beer in glorious sunshine. Work stresses were a million miles away and I was off to meet my new best buds: sunburn and one too many. Happy days, indeed. However, those are dangerous times, the sort of moments when you’ll agree to do just about anything. And so, now standing at the base of AJ Hackett’s 50m bungy, head pounding and stomach curdling from the night before, my opinion of what makes a good idea has shifted slightly. Well, drastically.

I’d been told that part of the appeal of the Cairns bungy, which is the world’s second-oldest commercial jump – after Queenstown in New Zealand – is its spectacular surroundings. And sure, there’s the looming jungle, squawking birds and lapping water, so that’s probably true. But I don’t notice. All I can see is a dangling rope.

As luck would have it – oh, joy – I’m the first jump of the day and so begin the climb. Ascending the wooden steps I go up, up, up, watching through the gaps with mounting terror as the ground gets further and further away.

Brain gone to jelly, I finally reach the top and it’s onto the next challenge: dealing with the harness guys. I’ve always thought there must be a specialist school for the people who do that job, so gifted are they in the art of delivering deadpan sadism. And so, trying to blot out the calls for a body bag, I teeter towards the edge.

I look down at the thin air beneath my toes, my head screaming at me to escape the madness. And then the countdown begins. My heart pounds through my rib-cage as suicidal urges mix with fears of my impending doom.

And then, suddenly, I’m away. Within a second, all fear is gone as I fly through the air, screaming, laughing and whooping as I bounce around like a demented doll. The rush, the relief and the all-round jubilation is total, the hangover a thing of the past. Perma-grin firmly fixed on my face, there’s only one thought going through my mind: “I need to do that again!”

However, rather than go for a repeat performance, I opt for trying out the other trick up Hackett’s sleeve, the Minjin Swing. Soon enough, I’m harnessed up again, before this time being lifted 45m into the air. I hover for a few tranquil moments and then pull the release cord.

In just over three seconds, I’m screeching through the trees at 120km/hr before rising back beyond the canopy and down again. When finally I come to a rest, I’m buzzing. I also start to think about beer. 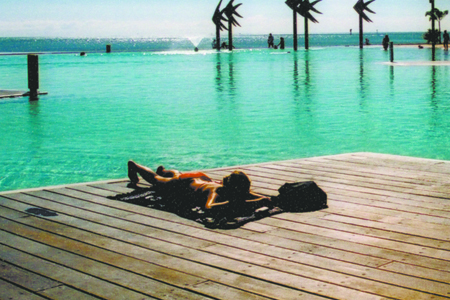 Luckily, Cairns is not a place to shy away from having a good time. Indeed, it feels like it’s practically bubbling over with the sort of irrepressible energy that can only come from being packed with people on holiday. And so, while those enjoying a slightly gentler easing into their days take to strolling up and down the pretty Foreshore Promenade, or lounging by the manmade lagoon, I go in search of refreshment.

Feeling fairly proud of myself, and glad to be alive, I start the proceedings off with style. I head to Ba8, which sits beneath the Shangri-La Hotel, at the southern end of the Esplanade, where many of Cairns’ more wallet-damaging accommodation options are grouped together, hoping they’ll escape the attention of marauding backpackers.

As yachties, businessmen and high-end tourists mill about, I sit back and savour the marina views, contentedly lowering the tone as the ocean breeze envelops me.

Suitably relaxed, it’s then onto the Esplanade, Cairns’ main tourist street that stretches the length of the town’s coastal side. You pay a slight premium for the waterfront location for sure, but the number of places is seemingly endless and the competition is tough, meaning there are always deals to be had. But, suitably refuelled after a few more pit stops, I head away from the ocean and into the heart of Cairns.

It’s at this point that a crossroads is fast approaching. As I crawl around the pubs that litter the land between Shields St and Spence St, a particular certainty draws ever closer, that of losing another night within the walls of one of Cairns’ pair of legendary backpacker drinking establishments, Gilligans and the Woolshed. Indeed, no east coast experience is really complete until you’ve found yourself stumbling into daylight after hours of dancing on the tables at one of those two bars. But I’m determined to branch out.

Instead, I jump in a cab to the outskirts of town, where I find the Tanks Arts Centre. Located within the Cairns Botanical Gardens precinct, the Tanks is a much-celebrated multi-arts centre housed in three converted Second World War naval oil-storage tanks. The unique venue will soon be playing host to many of the events at the upcoming Cairns Festival, but I’m there to catch a gig.

Used to store oil until as recently as 1987, the Tanks, cunningly concealed from enemy eyes by the surrounding rainforest, are a great venue which feel a million miles away from the wet T-shirt debauchery no doubt playing out at the Woolshed. I find the Afrobeat act Shaolin Afronauts on the stage, while it seems that every dreadlocked hippy in Northern Queensland has left their fire twirling sticks at home to come along for a bop. For what it’s worth, I think the Afronauts are heavy on promise and crazy outfits, without ever quite delivering the highs I’d hoped for, but the packed crowd seem to lap it up and the atmosphere is great.

Watching a band play within the confines of an old oil tanker hidden in the jungle is undeniably cool, and a completely different Cairns experience. 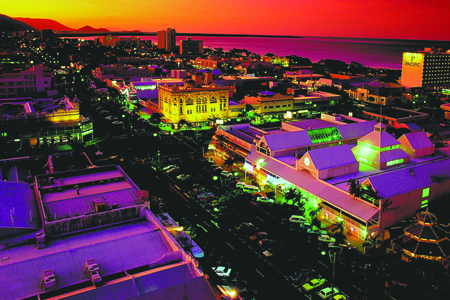 The next day is my last in Cairns, which means I absolutely must do the one thing you can’t leave Cairns without doing – seeing the reef. Stretching for over 2,000km, or about the length of 70 million football pitches, the Great Barrier Reef is one of the seven natural wonders of the world and, put simply, you shouldn’t leave Australia without seeing it and taking the requisite Facebook photo.

Actually comprising more than 3,000 separate reefs, there are stacks of places along the coast where you can jump in the wet stuff to glimpse some of the 1,500 species of fish on display, but Cairns is undoubtedly the most popular option, with scores of operators making boat trips as competitive as anywhere.

I opt for a day on Green Island, a rainforest-clad coral cay just an hour’s swift ride from Cairns Marina. I’ll admit I feared this little isle on the Inner Reef so near to Cairns might be overrun with tourists and slightly underwhelming, but how wrong I was.

Snorkelling in the shallows right off the white sandy beaches, I’m surrounded by colour. Huge brain and honeycomb corals rise from the sea-grass beds, giant clams open and close as I pass overhead and shoals of tropical fish dart one way and then the other, the sun piercing the water to shine off their backs and fill my vision with luminous yellows, reds and blues. At one point I stalk a friendly green sea turtle for 10 minutes as he nonchalantly does his rounds before I’m distracted by the shimmering markings of a passing blue-spotted lagoon ray.

The amount and variety of life on display is mesmerising and addictive and it’s hard to drag myself away from the giant aquarium I’m floating atop. Difficult, that is, until one other thought crosses my mind. Perhaps there’s time for just one more afternoon beer in the glorious sunshine.